Tag Archives: Robbing the poor to feed the rich 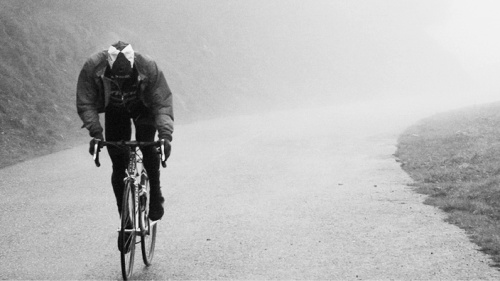 Dunedin residents will be able to make the most of safer cycle routes in coming months as the city’s cycleway network continues to expand. Dunedin City Council Infrastructure Services Committee Chair Cr Kate Wilson says cycleways make the streets safer for all road users and hopefully encourage more people to get on bikes.

“For years people have been asking the Council for enhanced cycleways in Dunedin. We have a responsibility to provide networks that give people travel choices, whether that be cycling, walking or taking a bus or car. The more of the network that is completed, the more we can provide for people who want to use cycleways, whether it’s a child cycling to school, an adult cycling recreationally, or anything in between.”

It is also a central government priority to rapidly expand and enhance networks of cycleways around the country, recognising the benefits to health, the economy and the environment. The DCC has received $570,000 from the Government’s Urban Cycleway Fund and the Council has decided the funding will be used to enhance and expand the South Dunedin Cycle Network. The DCC also receives funding from the NZ Transport Agency to build the network.

“Taking advantage of Government funding now is important as we have a limited window of opportunity to capitalise on our position as one of only a few cities with the requisite Strategic Cycle Network Plan. We are a financially constrained Council and the more funding we get from outside sources the less we need from ratepayers.”

In August 2011, the Council adopted the Strategic Cycle Network for Dunedin, which gave the South Dunedin network of routes the highest priority for design and construction. Cr Wilson says 40% of people living in South Dunedin do not have access to a car, which is a key reason for South Dunedin cycle routes being prioritised.

“We understand introducing cycleways to our streets has been a big change for some people, but we’ve got a great opportunity here to improve our city in a very positive way for current and future generations.”

Here’s an outline of what’s happening with South Dunedin cycleways over the next month.
● Portobello Road (between Timaru Street and Portsmouth Drive) – wider consultation on a revised concept plan for this stretch of road.
● Hillside Road/McBride Street – staff are reviewing the proposed cycleway design after meeting with local businesses.
● Neville/Wilkie Streets – a final decision on the type of cycleway for these streets will be made in April. Construction is scheduled to begin in May.
● Harbourside/Roberts Street – the Harbourside Working Group will meet again in mid April.
● Richardson/Coughtrey, Fingall/Tedder, Bellona/New Streets – Construction of these ‘quiet streets’ and dedicated cycleway should be finished in the next couple of weeks.

Residents, businesses and property owners in areas where cycleways are planned will be contacted directly.

█ General information is also available at http://www.dunedin.govt.nz/sdcn and more details will be added as projects are rolled out. 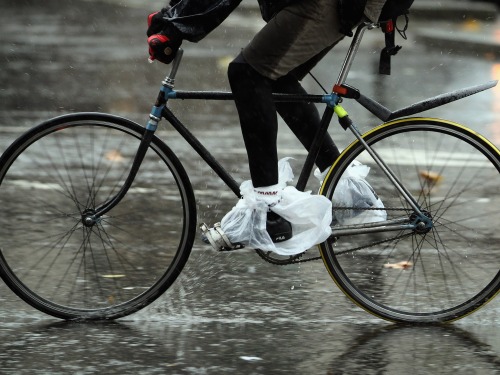 ██ Council to sell up to 150 plots of surplus land and property over the next two to three years in a move expected to raise about $10 million, targeted for paying off debt.
● Councillors urge rethink of land sale
● Council may net $10m in sales
● Southern suburbs among poorest 10%

### ODT Online Wed, 30 Jul 2014
Councillors urge rethink of land sale
By David Loughrey
Some Dunedin city councillors are urging a rethink on the sale of a council-owned car park near the Mayfair Theatre, but Mayor Dave Cull is adamant the sale should not be a political decision. Mr Cull said yesterday council chief executive Sue Bidrose had been delegated to make the sale, and it was not a matter for councillors. “That’s her job.” But three councillors want at least a discussion on the issue.
Read more

SOUTH DUNEDIN CYCLE NETWORK
“Based on what it now knew about costs […] the council would only be able to build 12km of the original 25km cycleway network within its original $4.5 million budget. The network would cost as much as $7.85 million if built as originally approved by the council.” (ODT)

### ODT Online Wed, 30 Jul 2014
Cycle project scaled back
By Debbie Porteous
The Dunedin City Council has been forced to pare back original plans for the controversial South Dunedin Cycle Network, as the true costs of the project become apparent. Despite being reduced by almost half, the curtailed network is expected to cost about $5.5 million – $1 million more than original estimates for the whole network. The blowout may eat into funding set aside for the rest of the city’s cycle network.
Read more

“I’m not surprised given the dickheads we’ve got around that table. It’s just another nail in Dunedin’s coffin; we’ve got a council not focused on business and focused on cyclists, but there are no cyclists.” –Roger Fewtrell

### ODT Online Wed, 30 Jul 2014
Threat to move over cycleway
By Debbie Porteous and Chris Morris on Wed, 30 Jul 2014
A Dunedin business owner potentially affected by changes to an intersection on the route of the new harbourside cycleway has threatened to move his enterprise to Auckland. […] Southern Hospitality managing director Roger Fewtrell said the council’s decision meant his company would consider its options at its board meeting early next month.
Read more 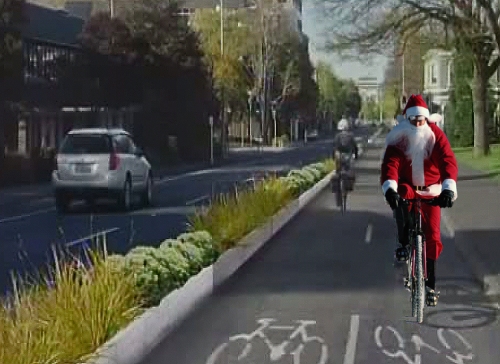 █ For more on DCC’s cycle network project for Dunedin, enter the terms *cycle*, *transportation* or *disaster* in the search box at right.

SOLD OUT: Santa’s in the vocal minority

Comment to article:
DCC’s +$47M cycleways project
Submitted by ej kerr on Thu, 14/11/2013 – 11:13pm.
Cr MacTavish has better things to do. She knows it. Her job as a city councillor is to take the air out of her various tyres and acknowledge that her loose-assemblage greenwash ‘political party’ should stop its spendthrift ways. Far better that they bend over backwards on quickly retiring the council’s +$623M consolidated debt. A harder workout than cruising on SH1 with the wind up their tails.

Reply:
Cycleway clarifications
Submitted by Jinty MacTavish on Fri, 15/11/2013 – 11:41am.
It’s an unfortunate urban myth that the DCC intends to spend $47M on cycleways, which seems to have originated from this article which double-counted the cost of a bunch of projects. I’ve asked staff to send through the breakdown and will post again here when I have the full details in front of me. Cont/

Discussion at What if? Dunedin:
JimmyJones
Submitted on 2013/11/17 at 9:25 pm
Sustainable Jinty commented in the ODT article referred to and said It’s an unfortunate urban myth that the DCC intends to spend $47M on cycleways, which seems to have originated from this article which double-counted the cost of a bunch of projects. I’ve asked staff to send through the breakdown and will post again here when I have the full details in front of me.
Here we see her claiming that the $47 million is a myth and that it has been wrongly calculated. She says this while not having the actual figures and not even knowing where it came from.
The figure actually came from the DCC at a forum in May this year involving the DCC and the NZTA ODT: City to lead country in cycle safety. We were told:
Dunedin is set to lead the country in cycle safety.
Projects worth more than $47 million will form a cycle network unlike any other within urban New Zealand, those at a forum in Dunedin heard last night. Mayor Dave Cull welcomed the almost 100 people present and explained why cycle infrastructure deserved significant investment.
It is clear that Jinty lied to us about the double counting. The figures are in the article, and there is no double counting. There is also no double counting in Jinty’s figures, because she doesn’t have any. Her attempt to discredit and minimize this estimated cost of bicycle projects has failed. Note how she re-interprets the claim as being DCC-only spending, whereas the claim has always been DCC + NZTA spending (Straw man). Richard Thomson on Radio Dunedin has been up to the same mischief (12/11/13). I say “mischief” but these statements could be offences against the Financial Reporting Act or other legislation. In any case this is very disappointing because the misinformation seems intentional. Desperation breeds dishonesty.

Reply:
Elizabeth
Submitted on 2013/11/17 at 10:38 pm | In reply to JimmyJones.
JimmyJones, I looked upon Cr MacTavish’s comment on the $47 million (in reply to a comment I made at ODT)… with sheer incredulity. I couldn’t believe what I was reading so didn’t even bother to reply.
However, glad you brought it up. You correctly place the councillor’s comment in context here and of course (!!!) what she says does not shine in a pure angelic or intelligent light. The quality of her ‘homework’ has dropped out the bottom, as ’twere.
Well done, JJ.

Related Post and Comments:
17.11.13 Cull, MacTavish: (to borrow a phrase) “Have you fixed the debt crisis?”