How is Aurora Energy Ltd funding the $30million pole replacement programme you speak about – from capex (capital expenditure), opex (operational expenditure), a combination of the two? or by other means? (please state)

Will Aurora Energy Ltd attempt to raise line charges for Otago power consumers, to achieve the number of (dangerous) pole replacements required in the next 3-5 years – how soon will line charges increase and by how much given regulatory scrutiny by the Commerce Commission?*

Is Aurora Energy Ltd solvent at this time? Explain.

Please provide any financial detail(s) salient to these matters.

Thank you for your enquiry. We acknowledge receipt of your official information request received by us on 21 February regarding Aurora Energy (our reference 0945). 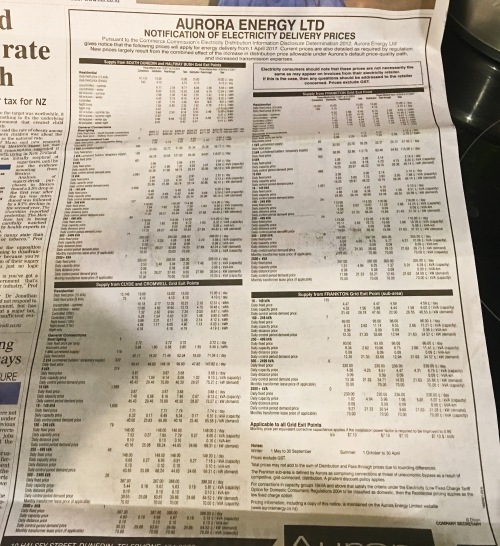 ### ODT Online Wed, 16 Nov 2016
Power restored in Tainui
By Vaughan Elder
Power has been restored to 430 customers in the Dunedin suburb of Tainui after it was cut this morning when a line came down. The outage happened at 9.10am after a power line fell on Cavell St near the intersection with Magdala St. […] Despite the line leaving scorch marks on the ground, the Delta spokesman said the line coming down presented “no danger to the public”.
Read more

The risks to individual lines staff are Ginormous. ‘Fatal conditions’ abound. Corporate care ensuring the physical and mental wellbeing and safety of staff is almost completely lacking. The risks to life are exponentially Unacceptable.

But what about the money….. there is none. The cost of bringing the electricity network up to compliance standard is Astronomical. A different model of ownership and operation is required –potentially, an opportunity, the Community could assume ownership of the network. Hopefully, ODT can explore the options by looking at other successful models – and which have No Ability to ‘strip and burn’ the asset.

Various sources inside Delta tell us the company has brought in an ex staffer as ‘Consultant’. They are paying him $5000 a day…. to skim the surface, was it. But really, Delta is setting up a new company ‘within Delta’ to replace the dangerous poles (at a Very Slow rate) – the work will be contracted out to the usual culprits. More soon.

Certainly, Vaughan Elder and the other journalists at ODT are holding their end up with timely coverage of the unfolding Delta ‘dangerous poles’ situation. However, the poles – although highly visible and a useful tool to raise Community awareness – are actually the least of it in terms of danger to Delta lines crew and the Community.

Lots to come out in the next days from sources inside and outside Delta.

All the while the Dunedin City Councillors sit on their hands, without a peep about COST TO RATEPAYERS AND RESIDENTS.

Remember, through the glass darkly, Mayor Cull made a song and dance before the local body elections about having reduced the council’s debt by some small millions; crowing his success with “straightening out council companies”.

This was ‘reinforced’ by [fleeing] Richard Thomson ‘at the end of his last meeting as chairman of the council’s finance committee’, informing us the council’s debt at the end of June had dropped to $217.25 million. ‘This was $30.6 million below budget and well below its target of $230 million by 2021.’

Ahem, ticking the third box of authoritative commentary, on 7 October Graham Crombie rolled up to tell us DCHL’s profit was up 57% and ‘debt across the companies and the council has reduced by $16.8 million to $581 million’. Oh dear, All progress lost and squandered now as Delta borrows $30M to replace the odd pole here and there, with god knows what other spending to be made in the vain hope of compliance.