Aurora Energy board chair Steve Thompson should shuffle back under his rock.
DCHL chairman Graham Crombie, mowing lawns at Clyde, has nothing to say.
The largest risk to the Otago Community continues to be Aurora itself.

### ODT Online Mon, 24 Apr 2017
Aurora sets new date to ‘remove risk’
By Vaughan Elder
Aurora Energy has abandoned a target to have all condition-zero poles replaced by the end of this month, saying it was now on track to “remove the risk” of 2910 poles by the end of this year. […] An Aurora spokesman said it had abandoned its original plan to replace all 1181 condition-zero poles, which are the worst-rated poles on its network, by the end of this month.
“Our target is to remove the risk around 2910 priority poles by the end of the year and we are on track to achieve that. That’s the target we are working towards. The April target was an initial working target before detailed programme planning had been completed.” After being given more than two weeks to respond, the spokesman did not say how many new condition-one and zero poles had been discovered during its fast-track programme, saying: “We don’t have these figures to hand today”.
Read more

█ Customers should check the Aurora website on outage days for cancellations.
http://www.auroraenergy.co.nz/outages/

Related Posts and Comments:
21.4.17 Why would DCC shaft its own company instead of investing in its change and development ?!
14.4.17 Dunedin homes face power blackout #Delta #Aurora
11.3.17 How Safe Are We/Our Businesses with the Corporate Disaster that’s Aurora, owned by DCC ? #reliability

Famous Fat Bros’ Aurora/Delta news trickles in…. but can the sisters divorce 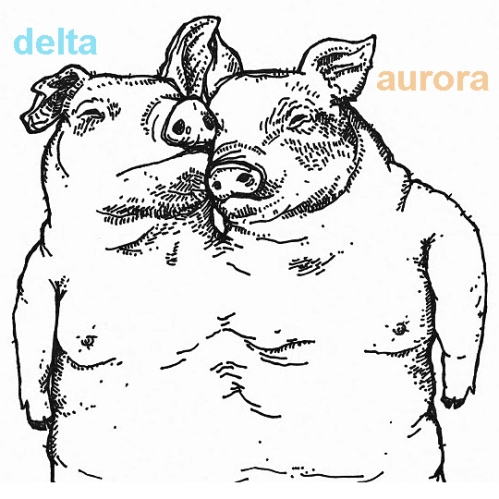 ### channel39.co.nz Wed, 29 Mar 2017
Delta and Aurora Energy to separate
About 95 Delta employees are expected to transfer to Aurora Energy by mid-year as the two companies separate. The business divorce is one of the recommendations from an independent review by Dunedin City Holdings Limited. Delta and Aurora Energy Chair Steve Thompson says they expect no redundancies from either business. Delta will employ just over 500 staff following the transition. Aurora Energy will be a network company with network renewal as its priority, while Delta will provide electricity distribution, green-space and solid waste services.
Ch39 Link

### radionz.co.nz 9:22 pm on 29 March 2017
Dunedin’s Aurora Energy to take on Delta workers
Almost 100 employees from Dunedin power lines company Delta will transfer to its sister company Aurora Energy as the two firms separate.
The split of the council-owned companies was sparked by the discovery that thousands of power poles in Otago were rotting.
A whistleblower last year revealed thousands of power poles managed by Delta and Aurora were failing.
The Dunedin City Council released a report in December that recommended splitting the council-owned companies into separate entities, after three official inquiries.
A report by Deloitte recommended separate board management structures.
In a statement today, Delta said 95 employees would transfer to Aurora by mid-year, and there were no expected redundancies.
RNZ Link

DCHL/DCC farming of the conjoined twins deserves a break….

Yes we really believe the two council-owned companies have great governance and superb management!? We also totally believe DCHL is a solid grounded entity!? Pity about the number of executive and staff resignations from Delta to date, and the resulting inability to fill job vacancies. Would you touch these blighted babies. Oink.

### ODT Online Thu, 30 Mar 2017
Restructure proceeds
By Vaughan Elder
Dunedin City Council-owned companies Delta and Aurora are a step closer to becoming separate entities. Aurora and Delta announced in a joint press release yesterday about 95 Delta staff were expected to transfer to Aurora Energy by mid-year as part of the companies’ transition to standalone entities. The transition comes after a Deloitte report into accusations Aurora dangerously mismanaged its power network and failed to replace compromised poles recommended the two companies be split. According to Aurora’s annual report, it employs no staff and the management of the company is carried out by Delta, which is also contracted to carry out network maintenance. The Deloitte report said the closely linked arrangement was “fraught” with challenges, but acknowledged Aurora had been working on a restructuring programme which would have split the two companies in any case. Delta and Aurora chairman Steve Thompson, who was not available to answer questions about the press release, said significant progress had been made in the reorganisation of both businesses.
Read more

*Image: monsters international via blogspot.com – Siamese Twin Pigs by Alicia B Lim, ink on watercolour paper (US), tweaked by whatifdunedin

How Safe Are We/Our Businesses with the Corporate Disaster that’s Aurora, owned by DCC ? #reliability

A N O T H E R ● L E A K —Aurora confirms it has breached standards over the average amount of time power has been cut per customer after its data was leaked to the Otago Daily Times.

### ODT Online Sat, 11 Mar 2017
Aurora fails reliability for third year
By Vaughan Elder
Aurora Energy could be fined or face court action after breaching a limit on power interruptions for the third year running. The Dunedin City Council-owned company said it took the breaches “seriously” and would probably ask the Commerce Commission to relax its reliability standards. If the Commerce Commission agreed, Aurora would be only the second lines company to operate under relaxed standards under a system called a customised price-quality path. The only other company to operate under such a system was Orion, after its infrastructure was damaged in the Christchurch earthquakes. Meeting the standards is important because the Commerce Commission takes into account liability when setting limits on how much lines companies can earn. …[Aurora] would not be drawn over whether a lack of investment had contributed to the breaches. […] A Commerce Commission spokesman said it was not aware of the reported breach as Aurora was not required to provide the information until June. However, if Aurora had breached standards its response could range from warning letters to administrative settlements and court proceedings. It could also penalise Aurora by cutting up to 1% of its revenue.
Read more

We hear poor Steve Thompson is not coping with all these leaks….

How is Aurora Energy Ltd funding the $30million pole replacement programme you speak about – from capex (capital expenditure), opex (operational expenditure), a combination of the two? or by other means? (please state)

Will Aurora Energy Ltd attempt to raise line charges for Otago power consumers, to achieve the number of (dangerous) pole replacements required in the next 3-5 years – how soon will line charges increase and by how much given regulatory scrutiny by the Commerce Commission?*

Is Aurora Energy Ltd solvent at this time? Explain.

Please provide any financial detail(s) salient to these matters.

Thank you for your enquiry. We acknowledge receipt of your official information request received by us on 21 February regarding Aurora Energy (our reference 0945).