Former Mosgiel-Taieri Community Board member Brian Miller, a resident of Riccarton Rd, is one of four landowners along the stretch who have declined to sell part of their land to the council for the project.

### ODT Online Wed, 23 Apr 2014
Get road fixed – board
By Debbie Porteous
The Mosgiel-Taieri Community Board has again urged the Dunedin City Council to get on with improving Riccarton Rd, saying it is even more of a priority now the council has agreed to allow 50-tonne trucks on local roads. The board made the plea in its submission to the Dunedin City Council on its 2014-15 draft annual plan. […] The council plans to widen and strengthen Riccarton Rd to improve its safety, and is working through land purchases to that end.
Read more

NZTA | 50MAX
Updated: 15 April 2014
50MAX is a new generation of truck that allows for safe and more efficient transport of freight goods.
50MAX vehicle combinations have one more axle than conventional 44 tonne vehicles combinations, meaning the overall truck load is spread further and there is no additional wear on roads per tonne of freight.
50MAX gives operators an option to carry increased payloads on parts of the network that, while economically important to New Zealand, carry lower volumes of freight. The increased payloads of 50MAX can lead to economic benefits for producers, customers and our communities.

The New Zealand Transport Agency is now accepting 50MAX permit applications for State Highways in the North Island and South Island, as well as a steadily increasing number of roads delegated by local authorities.
50MAX permits for other local roads will be rolled out as they become available (in the meantime, 50MAX operators can apply for higher mass HPMV route permits from local authorities).
Read more + 50MAX vehicle designs

On the road
● Trucks will be permitted to carry loads of up to 53 tonnes on specified routes.
● Some types of trucks, including logging rigs and vehicle carriers, will be allowed to extend to 22m “as of right” instead of by permits.
● Some buses will be allowed to be 13.5m long – up from 12.6m now.
● Farm machinery will be allowed on roads at all hours, as long as it occupies no more than one lane. 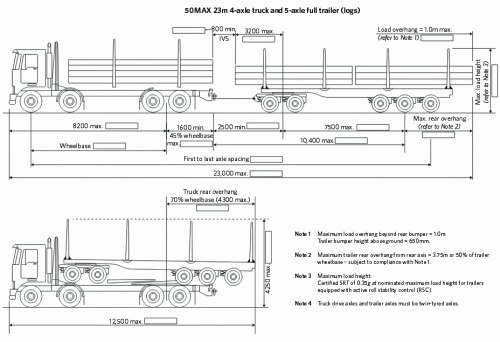