Who wants to live near power lines? They run right through the subdivision. 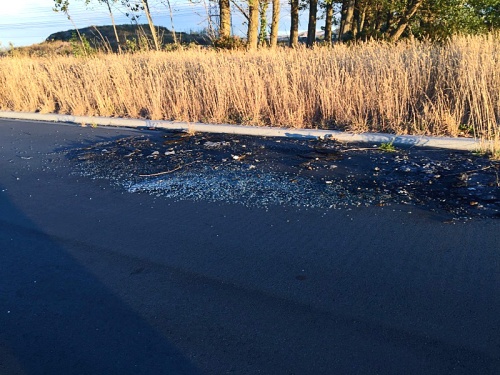 No one is working at Yaldy, this glass has been on the road for a long time.

The crowning glory – unbelievable, no ads for Yaldhurst sales but an ad on the property for a subdivision near Pegasus!

That hoarding (not that old… months only) originally featured marketing for the commercial area at the Yaldhurst subdivision. Recently pasted over with Infinity’s other project.

[“Ravenswood, half an hour north of Christchurch, is being offered for sale by developer Infinity Investment Group, which says the project is too big for it.” See last note at (28.3.15) Stuff: Gloomy outlook for solar housing in Christchurch; and (9.8.16) Stuff: Work to begin on Ravenswood development after sale abandoned.]

News Flash
The word on the street is that a well-heeled solid respectable group offered $12,000,000 actual cash, money, moolah, for Yaldhurst.
The idiotii accepted a notional nonexistent $13million from a $1000 capitalised company who have subsequently made no moves towards repair, consents, or even inspected their new purchase.
If they have inspected it, one would have thought they would clean glass from the road (been there so long it’s almost fused and embedded). Maybe they would have mowed the grass? Or perhaps they would have found the keys to the lone token digger. Having commenced these $5 dollar cleanups they may have been able to put a sign up advertising the properties.
And why is activity important to a Dunedin ratepayer or councillor?
Because honey, we do not get any money until they sell profitable sections.
That’s why the $12,000,000 cash was the only offer that the idiotii should have accepted and folks that’s why you do NOT elect Greens, flakes and dreamers, because it’s your money they have, and will enjoy wasting.

whatifdunedin replies:
Your point is well made, Gurglars. But. It’s much more complicated than that. Seller was the buyer. And we have Graham Crombie (accountant!) as middle man, we wonder who he is really working for, Gordon Stewart? Justin Prain? Murray Frost? Previously/still, Stuart McLauchlan? Who.