Since it was first identified more than a century ago, we still have no cure for Alzheimer’s disease. Among the various avenues that researchers have been working on to try and understand the causes and potential treatments for the disease, the role of blood vessels has been increasingly a focus – and in particular the “blood-brain barrier”, a protective layer of cells that regulates what can enter the brain through the blood. The blood-brain barrier is usually very tight in young, healthy people. This means that the brain controls what substances get in, which is important for proper brain function. However, this high level of control can be a problem for treating brain diseases because drugs in the bloodstream can be kept out of the brain. A lot of research is being done to try get around this problem […] As well as acting as a gatekeeper for entry of substances into the brain, the blood-brain barrier is important for removing waste products from the brain. One of these products, β-amyloid, is a key player in Alzheimer’s disease.

This on-going cycle of damage is thought to contribute to the development of Alzheimer’s disease.

PsyPost is a psychology and neuroscience news website dedicated to reporting the latest research on human behaviour, cognition, and society. The publication covers the latest discoveries in psychology, psychiatry, neuroscience, sociology and similar fields, featuring news releases from universities and other organisations, along with original reporting on undernoticed studies.

Scientists at the Stanford University School of Medicine have shown how a protein fragment known as beta-amyloid, strongly implicated in Alzheimer’s disease, begins destroying synapses before it clumps into plaques that lead to nerve cell death.

Source: MedicalExpress.com : Scientists reveal how beta-amyloid may cause Alzheimer’s (19.9.13)

### msn.com Fri, 2 Sep 2016 8 hrs ago
Alzheimer’s: New drug that halts mental decline is ‘best news for dementia in 25 years’
By Sarah Knapton, Science Editor – The Telegraph (UK)
The first drug that can prevent Alzheimer’s disease is finally on the horizon after scientists proved they can clear the sticky plaques from the brain which cause dementia and halt mental decline. Hailed as the “best news” in dementia research for 25 years, the breakthrough is said to be a potential “game changer” for people with Alzheimer’s. 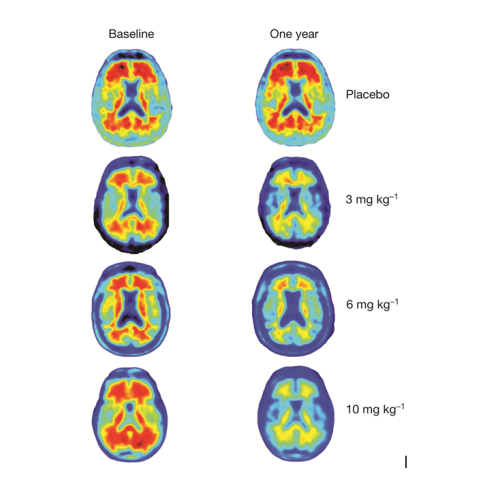 The red marks show amyloid plaques but after a year they are gone in the highest dose group. [telegraph.co.uk]

Scientists said they were amazed to find that patients treated with the highest dose of the antibody drug aducanumab experienced an almost complete clearance of the amyloid plaques that prevent brain cells communicating, leading to irreversible memory loss and cognitive decline.

Crucially they also found that after six months of the treatment, patients stopped deteriorating compared with those taking a placebo, suggesting that their dementia had been halted. If shown to be effective in larger trials, the first drug to prevent dementia could be available in just a few years.

“The results of this clinical study make us optimistic that we can potentially make a great step forward in treating Alzheimer’s disease,” said Prof Roger Nitsch, at the Institute for Regenerative Medicine at the University of Zurich. In the high dose group the amyloid has almost completely disappeared. The effect size of this drug is unprecedented. Despite it being a small sample there appeared to be a slowing of cognitive decline and functional decline. The group with a high degree of amyloid removal were basically stable. If we could reproduce this it would be terrific.”
Read more

3 responses to “Dementia research : Clearing sticky plaques from the brain”