“If the council had just accepted the money, admitted that the people withholding their rates were wronged, that their case had merit, we could have all moved forward together” – Mangawhai ratepayer Bruce Rogan
(via Checkpoint) Audio | Download: MP3 (3′04″)

### radionz.co.nz 6:01 pm on 16 Sep 2016
New Zealand: Northland
Northland rates rebels win partial victory
By Lois Williams – Northland reporter
The rebel ratepayers of Mangawhai in Northland have won a partial victory in the High Court. The court has found that rates levied from 2011 to 2014 by the Northland Regional Council, via Kaipara District Council rate demands, were unlawful. In an interim decision, Justice Duffy found the Northland Regional Council (NRC) has no power to delegate the assessment of rates or the recovery of arrears to other councils. “The errors I have identified are serious and substantial,” the judge said. “In short, the NRC has failed to exercise its statutory powers properly when determining rates resolutions and it has unlawfully sought to delegate the performance of a number of its functions in relation to rates to the Kaipara District Council.” […] The Mangawhai ratepayers’ chair, Bruce Rogan, said the ruling was very welcome, although the court did not uphold the group’s challenge to penalties and GST imposed by the Kaipara District Council. The council should now agree to negotiate a deal to end the six-year-old Kaipara rates row, Mr Rogan said.
Read more

INTERIM HIGH COURT JUDGMENT RELEASED 16.09.2016
Duffy J has made an interim judgment in respect of the judicial review brought by the MRRA and Bruce and Heather Rogan challenging the lawfulness of rates set by the NRC and the KDC.

She has made the following decisions:

Duffy J has not yet decided what order to make in respect of ordering the NRC to refund the unlawful rates charged. She has invited the NRC to make further submissions and especially to examine how this ruling might affect the legality of the rates that it has set for its other constituent areas – Whangarei and the Far North. Those rates might also be unlawful.

She will make her final decision once both parties have made further submissions.
Read more 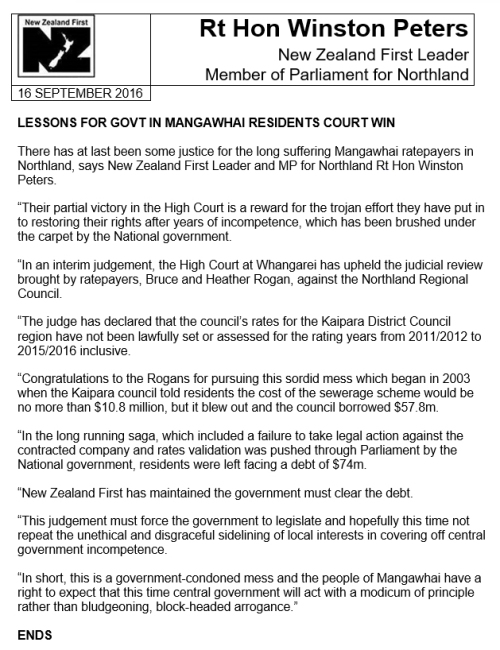