DCC hasn’t got the message. Still doing stupid deals behind scenes; and look at the inexperience around the council table – FRIGHTENING.

###Last updated 05:00 21/04/2011
Councils ditch projects in favour of restraint
By Katie Chapman
Business as usual is the new catchcry for councils as they ditch big projects in favour of restraint. Throughout New Zealand, people are being asked to comment on their local authorities’ draft annual plans – and proposed rates increases – as debate over next year’s budgets gets under way. But big blowouts have been abandoned, with more than half the councils proposing increases below the rate of inflation, which rose to 4.5 per cent this week.
Read more

In the jargon of business, Citibus has made efforts to be a “good corporate citizen” . . . The question must be asked about the ability of the council, even at arm’s length through a company structure and with independent directors, to run successful businesses in highly competitive markets.

Feeling VERY Presbyterian this week. Oi. What is adaptive reuse.

### ODT Online Wed, 20 Apr 2011
Kavanagh College expansion begins
By John Lewis
The demolition of two large buildings in Tennyson St yesterday signalled the beginning of a major expansion of Kavanagh College in Dunedin. The Roman Catholic Diocese of Dunedin took advantage of a rare opportunity to expand the college grounds by up to 25%, by buying the neighbouring Otago Polytechnic grounds last year.

The building on the corner of Tennyson St and York Pl would remain untouched because an application had been made by the Historic Places Trust in Dunedin to make it a category 2 historic building. It is believed to be of historic importance because it was where prominent New Zealand artist Colin McCahon was trained.

The three buildings at 136 Tennyson Street are part of the original King Edward Technical College (KETC), the largest secondary school in New Zealand for over twenty years.

The Dunedin Art School, on the corner of York Place and Tennyson Street, was built in 1937 and designed by the Government Architect John Mair.

With internationally prominent teachers, the Art School was a training ground for the likes of Colin McCahon and became the springboard for New Zealand modernism.

When the three buildings were taken over by the Otago Polytechnic in 1963, the Marlow and [Art School] buildings became the foundation of the Department of Hospitality and Services. Later the department extended into the Patrick building where it established a training restaurant named for KETC’s most famous student, Joseph Mellor. The restaurant became a popular public eatery. The buildings were vacated by the Polytechnic in mid-2009.

The Dunedin School of Arts was founded in 1870 when the services of David Con Hutton were secured by the Otago Education Board. In 1921 the Art School was officially incorporated as a department of KETC. For ten years the Art Department moved around various areas of the main building. In 1937 the purpose-built Art School was opened on the corner of Tennyson Street and York Place.

The Art School building was partially funded by a substantial grant from the Government. As the Project was in the hands of the Public Works Department, the plans were designed by the Government Architect, John Mair (1876-1959). The Board’s architects of choice, Mandeno and Fraser, were apparently retained only to organise the site and design the retaining walls necessary for the erection of the School.

From 1923 to 1941 Mair was responsible for most of the government buildings erected in New Zealand, many of them involving significant departures from tradition and precedent in both style and construction methods. During his tenure, modernist architectural precepts displaced the revivalist styles favoured for public buildings in the past. Construction methods also began to utilise concrete and structural steel instead of brick and timber.

These construction methods were in evidence in the plans for the Art School. The Board, however, was in favour of brick in keeping with the original portion of KETC. In response, Mair convinced the Principal of the justification for a building framed in wood with well-concreted foundations, steeltex and plaster walls with a tiled roof.

Sketch plans were ready by August 1935. The design was of an impressive entrance and two-story building on the corner of Tennyson Street and York Place, and a one story wing running down York Place. Tenders for the Art School were called for in May 1936. The successful contractor was D.A. O’Connell & Co. The Head of the School, Tovey, was responsible for internal fittings.

The School included nine classrooms, mostly with dimensions of c. 30 x 26”, and several offices. The interiors were lined with tentest wallboard. The entrance was impressive and lined in black tiles. One of the classrooms remains largely unaltered.

The Marlow Building, opened in 1948 as the new domestic wing, was similarly designed by Mair. The building is being demolished this week, apart from the archway section to Tennyson St. Someone should be fired. 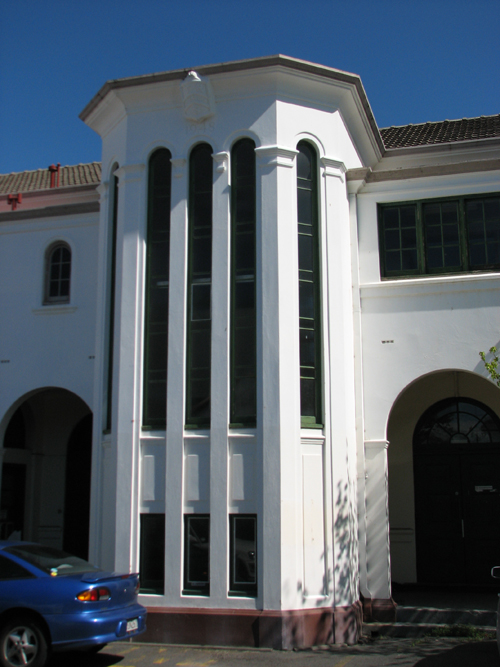 The JM Patrick Building was designed by Mandeno and Fraser, as were the earlier portions of KETC, and opened in 1960. Gone this week, too. It had nice pipes (later additions). 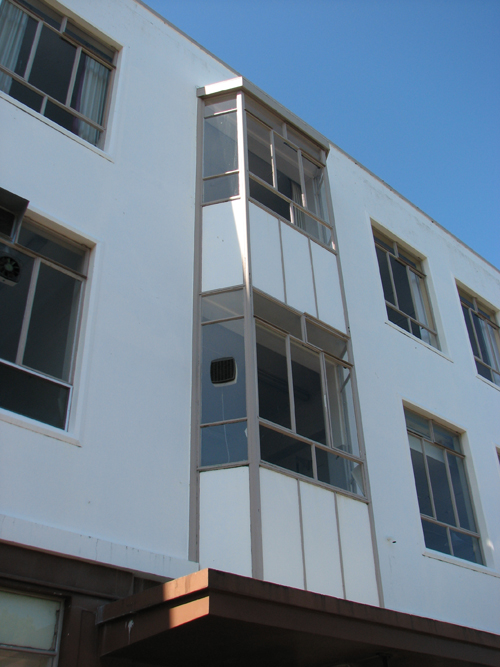