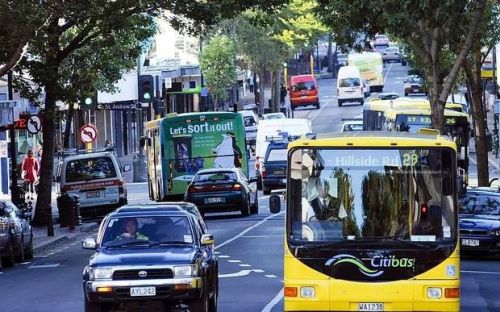 ### ODT Online Fri, 12 Sep 2014
Call for cheaper bus fares
By Rebecca Fox
Calls for public transport to be more affordable and accessible for the “walking poor” dominated yesterday’s public transport hearing. “Heart-wrenching” tales of parents walking with young children from Corstorphine to Dunedin Hospital or walking up steep hills carrying bags of groceries while buses zoomed past were made to the panel of regional councillors Sam Neill (chairman) and Michael Deaker, along with Dunedin city councillor Aaron Hawkins, as they sat through the second day of public submissions on the draft regional public transport plan. About 330 people and organisations made submissions to the draft plan that contains sweeping changes, expected to lead to faster and more direct routes away from smaller residential streets.
Read more

### onenesspublishing.com March 20, 2013
Urban sprawl isn’t to blame: unsustainable cities are the product of growth fetish
By Brendan Gleeson
In a recent article on The Conversation Robert Nelson argues we are all morally culpable for unsustainable urban sprawl. He goes on to suggest we fix this by taking advantage of opportunities for higher density development in sparsely populated inner suburbs. But his argument is based on a false opposition: mounting evidence shows that high density development in inner areas performs very poorly in terms of resource consumption and greenhouse emissions. The idea that outer suburbs are inherently less sustainable than inner ones doesn’t bear scrutiny. The key question is not where we accommodate growth; it’s our slavish pursuit of growth itself.
Read more

● Brendan Gleeson is Professor in Urban Policy Studies at University of Melbourne.

Read two articles by Robert Nelson at The Conversation:

The grass isn’t greener in the outer ‘burbs (7 March 2013, 6.43am AEST)
“For a long a time real estate close to the palace was socially desirable, and anyone with aspirations didn’t want to know about the rest. Today in Melbourne inner-city people are embarrassed to reveal knowledge of the outer suburbs such as South Morang, like 17th century Parisians who would mispronounce the street-names of poorer areas or affect not to know them at all. Throughout history, the distribution of wealth has had a geographical expression. Snobbery, however, is only part of the challenge of urban geography. Power and privilege are concentrated within 10kms of the city centre.”

The devaluing dream; why Australian suburbia is an economic disaster (11 January 2012, 6.22am AEST)
“In spite of what everyone believes through natural pride and vanity, the family house is an asset that depreciates. Don’t be deceived that the value of property goes up and up, which of course it does. The rising prices are caused by the land becoming more expensive, not the house itself.”

Ian Athfield chronicles the challenging journey taken since being appointed to the role of Architectural Ambassador for post-earthquake Christchurch.

The earthquakes have magnified the reliance on pattern making by the motorcar instead of dealing with the respecting of communities.

### architecturenow.co.nz 7 Dec 2011
The challenge of Christchurch
By Ian Athfield
For those who have been close to the destructive events which occurred in Christchurch it is extremely difficult to remove oneself from the magnitude of the task facing the city’s future. Thirteen months after the first quake, sitting watching the tide move slowly in over the sands of Awaroa in the Abel Tasman National Park, I am able to reflect on the subject without the confusion of the many voices and images that have been roused and drawn within Christchurch and beyond. 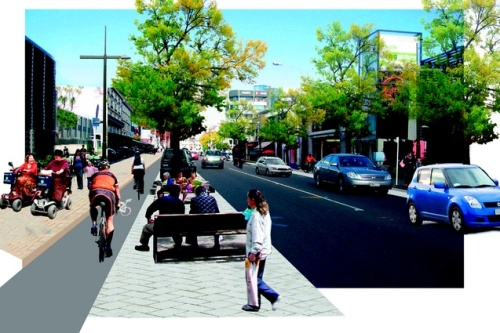 There is a very strong case to allow simple, low-rise, well designed, re-locatable buildings to link the remaining existing structures of the city in a clear and coherent expression of the beginning of a new focus, while long-term decisions are clearly thought through by intelligent minds working together. Long-term decisions can build on this fabric.

### npr.org December 21, 2010
Big-Box Retailers Move To Smaller Stores In Cities
By Franklyn Cater
Retailers have been following the growth of the suburbs for decades, setting up in shopping centers and big-box strip malls far outside the core of major American cities. Department stores that stayed in big-city downtowns have suffered. Others didn’t stay — they closed up altogether.

But a reversal of that trend is becoming apparent. Big-box retailers — companies that built their discount businesses out where land was cheap and space was plentiful — are now moving inward.

Both Wal-Mart and Target are prime examples of big-box stores with big-city plans. They’re aiming at the likes of Chicago, Los Angeles, New York, Seattle and Washington, D.C.
Read more

How do we design and build to accommodate changing economics, family sizes, and employee and student populations? How can we merge online technologies with physical architecture to more directly serve our real-time needs?

“The city is a dense network of relationships. The best way to provide infrastructure is to not go in with a meat ax but to practice urban acupuncture, finding thousands of different spots to go into.”
–Nicholas de Monchaux

That quote is 40 years old, but I continue to be amazed by the extent to which we haven’t begun to address the problem Fuller highlighted. There’s a staggering glut of empty space around the country right now, unused space that’s not doing anyone much good. That in itself isn’t new; what is unprecedented is our ability to visualise that data in an entirely new ways.

The ability to use GIS (geographic information systems) to locate data spatially, for example, is one reason Barack Obama is president today. His campaign turned a database of voters and volunteers into a map and was able to strategise house by house about how to get those votes. More broadly, GIS allows us to literally view our place both globally and in a hyperlocal context.

That level of specificity, both at the micro and macro level, is helping revolutionise the way we think about, plan for and design the space we inhabit (or abandon). A visual map can show us patterns of overbuilding, abandonment, mis- (or lack of) use; it can teach us something about our current tendency to overbuild.

How can this now-instantaneous access to data add clarity to ingrained patterns, and perhaps allow us to change those patterns according to evolving needs and requirements?
Read more

● Allison Arieff lectures and consults on media, design and sustainability, most recently for Urban Revision and IDEO. She lives in San Francisco.

Local Code’s quantifiable effects on energy usage and stormwater remediation eradicate the need for more expensive, yet invisible, sewer and electrical upgrades. In addition, the project uses citizen participation to conceive a new, more public infrastructure as well —a robust network of urban greenways with tangible benefits to the health and safety of every citizen.

USA’s Builder magazine picks their 10 Residential Design Trends for 2011, which include smaller houses, green building, a farm-to-table influence in the kitchen, and a walkable, village feel.

### builderonline.com December 16, 2010
10 Design Trends for 2011
By Jenny Sullivan
[excerpt] “Village Vibe. The suburbs are starting to feel more like little cities as planners and developers find ways to weave density and walkability into existing hot spots. “Fewer large-scale development opportunities have shifted the emphasis to smaller infill projects,” AIA chief economist Kermit Baker wrote in a recent design trends report. But these new nodes of “light urbanism” aren’t replacing existing subdivisions; they are popping up between them and connecting the dots. Prime targets for infill redevelopment include big box parking lots, dead shopping centers, strip malls, and transit stations. “People who want an urban lifestyle but either do not want to live in a ‘big city’ or cannot afford to will look to live in the many suburban town centres that have been emerging,” Urban Land Institute senior resident fellow John McIlwain wrote in a recent white paper.”
Read more