Earthquake —Stuff tells you what to do #EQNZ

Stuff (Fairfax): Large quake rocks central New Zealand
Last updated 20:48 21/07/2013
A severe magnitude 6.5 earthquake has hit central New Zealand this evening, damaging buildings, cutting power, trapping people in lifts and injuring at least two people.
GeoNet said it was centred in the Cook Strait, 20 kilometres east of Seddon at a depth of 17 kilometres. It struck at 5.09pm.
The Pacific Tsunami Centre in Hawaii said the quake did not generate a tsunami, but a number of smaller quakes have struck since – the latest, a 4.4 magnitude 25km east of Seddon at 8.27pm, followed closely by a 5.1 magnitude near Hanmer Springs.
The 6.5 magnitude quake was likely linked to a fault in the Cook Strait capable of generating far more severe shaking, GNS Science said.
If there were a sequence of events, as in Canterbury, EQC would have up to $6.5bn in cover. A spokesman for EQC minister Gerry Brownlee said EQC had “ample to cover any future event.”
Read more

(via Stuff)
What to do in an earthquake | Photos | Video: Powerful quake hits | What you need to know | Video: As the quake hit | Regional round up | Map: Recent quakes

● 3 News
More quakes shake North Island
Civil Defence: What to do after an earthquake

● ONE News
At least one injured as severe quake strikes
Wellington’s emergency offices have been activated and USAR is on standby after a powerful earthquake shook central NZ. 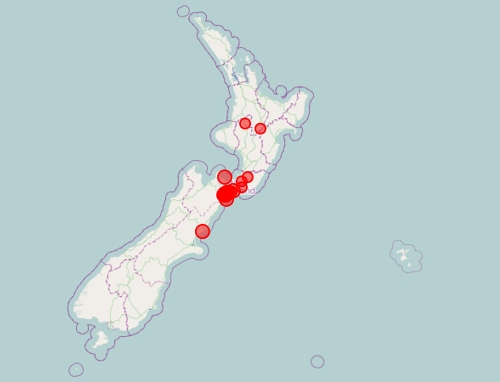 #eqnz
As Wellington assesses itself and keeps people out of the CBD for safety reasons according to its Civil Defence Plan now in force following today’s significant earthquakes and tremors, readers have been hitting these links . . .