South Dunedin stormwater pipes —getting past the desktop ICMP

Stormwater is rain or snow runoff that does not soak into the soil.
When an area is developed, stormwater generally increases due to runoff from impermeable surfaces (eg roofs, roads, carparks, or compacted soil). It flows naturally from higher to lower ground, and ultimately discharges into natural watercourses such as wetlands, creeks, rivers or the sea. Land development results in the creation of both private and public stormwater systems, which collect and transfer stormwater to lower ground more efficiently. The public stormwater system is a network of drains, gutters, pipes, mud tanks, detention ponds, stormwater reserves and other associated infrastructure.

At other threads (here and here), contributor JimmyJones has cited the South Dunedin Integrated Catchment Management Plan (ICMP) to draw attention to the actual or perceived state of the stormwater pipes at South Dunedin. He believes the type of pipeways and the deteriorating condition of the pipes contributed to the June 2015 South Dunedin “flood event”, and will require budgeted upgrade.

But is the South Dunedin ICMP correct about the underground pipes and their condition?

Largely, the ICMP was a desktop assessment carried out by consultants for the Dunedin 3 Waters Strategy. Namely, Opus International Consultants and URS New Zealand (now trading as Aecom) in association with Dunedin City Council.

Read more about the 11 ICMPs for Dunedin here.

DCC says ICMPs are used for planning and management of the stormwater system. For each stormwater management area, or catchment, issues are identified and prioritised, and solutions are identified and implemented. The ICMPs are mainly in the metropolitan Dunedin area (including Mosgiel and Port Chalmers). They inform investigation and planning decisions and help focus council priorities for future operational and capital works. Implementing the ICMPs is also a key requirement of DCC consents to discharge stormwater into the coastal marine area. Further information is available on the Stormwater monitoring page, see also the Stormwater responsibilities page.

The Pipes at South Dunedin
Local water and drainage experts familiar with the stormwater system say:

The South Dunedin ICMP report has been read, it’s “ok”. But it’s also described as “…glossy and costly for the consultant(s). Basically, such reports tell the Council stuff they neither read nor understand, but would have mostly been trivial knowledge (where accurate)” to local experts familiar with the design and day-to-day workings of the stormwater system.

“You can believe any part of [the ICMP] or not. It’s a desktop study, which speculates on pipe condition. Robinson and Hendry have read it and obviously don’t agree. Pipes last for an eternity with limited maintenance (other than blockage removal) provided there isn’t ground movement or corrosion (these pipes are concrete).”

ODT 13.2.16
“Mr Hendry believed South Dunedin’s infrastructure, which he spent six years helping build as a surveyor in the 1960s, would have been good enough to prevent much of the damage had it been properly maintained. […] My view is that these people out here, a lot of them have got nothing. Now they have got a hell of lot less. It’s not fair on them. Nobody’s come out and said ‘we were wrong. Something wasn’t done right’.”

So we’re going to play it this way #SouthDunedinFlood

1. The claim of “factual errors” is surely able to be substantiated or thrown out by a suitably qualified (named) EXTERNAL peer reviewer acceptable to DCC and engineer Neil Johnstone. The ‘matter of degree’ (serious ?) is a matter for the peer reviewer to comment on. As are issues of professional competencies —which only an independent and transparent peer reviewer with nationally recognised engineering expertise can deal to. Not an in-house operational.

2. Neil Johnstone has issued three reviews, two of these deal to DCC’s formal reports on the June 2015 South Dunedin “flood event”, dated 30 Nov 2015 and 26 Apr 2016 respectively; and the third deals to comments (video recorded by Ch39 and published at DCC’s Youtube channel) during the DCC Infrastructure Services Committee meeting held on 26 April 2016. The reviews are published at this website – enter the term *johnstone* in the search box at right.

3. Neil Johnstone has requested that factual errors noted by DCC be made discoverable. DCC appears to be side-stepping qualification and quantification of its verbal assertions every which way.

4. It is highly likely that no expert external peer reviews exist or they would have been made public by now. More than a year after the “flood event”, we wait.

5. A peer review(s) is not something to hide. Why is DCC doing secret squirrel when challenged to substantiate its earlier comments (publicly stated on more than one occasion, recorded by mainstream media – for example, by Mayor Cull and Transportation’s Ian McCabe, who later resigned) – that external peer reviews of its formal reports did happen. After the fact is a little squiffy, if DCC is writing them now.

“Technical qualifications and experience with stormwater infrastructure design and management” are not provided. Rhetorical.

Holes being dug, an epitaph. 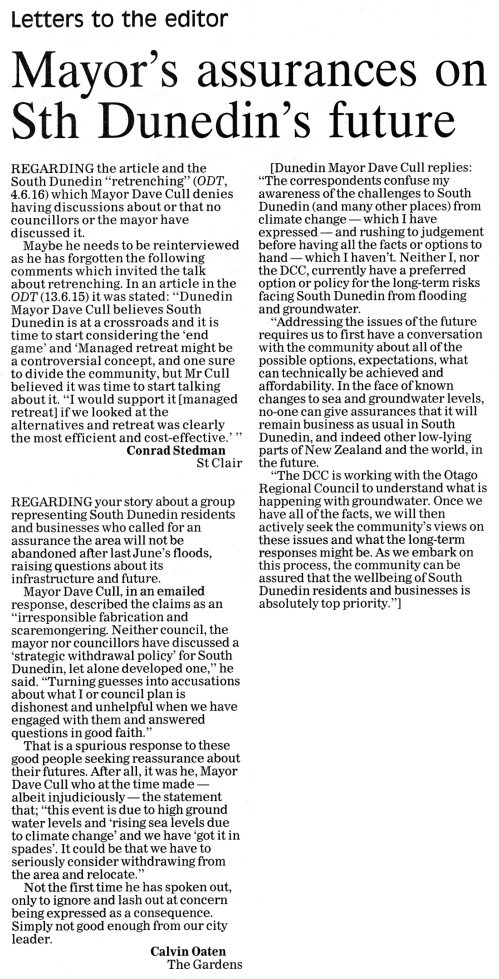 Truth and decency are owed to the flood affected people of South Dunedin.

Interpretations post flood and in the months since —appear without technical evidence, making false claim to Climate Change (the ‘end is nigh’ if only to avoid local government liability), in contradiction to data and analysis provided by local engineers, ORC, MetService and former council staff, amongst others.

‘Our leader’ is in a self-flagellating hole —prepared to say anything to attract votes in the October local body elections. Serious ? Genuine ?

We owe it to ourselves.
The Mayor of Dunedin should not get a third term.

This has done too much damage: tens of millions of dollars of damage at South Dunedin. A massive hit sustained by constituents and insurers. Yet today ‘the administration’ rattles and unsettles the community it has comprehensively failed, with latest wanton burble at the opinion pages of the Otago Daily Times.

The Mayor should immediately resign his office at Dunedin City Council.

Bullshit from the Mayor and underlings is UNACCEPTABLE.
South Dunedin has a stormwater system that when properly maintained is well able to take rainstorms equivalent to that experienced a year ago.

Systems can always be improved but the current stormwater system is not all that old and has been designed with sufficient control mechanisms and stopgaps.

The Administration failed (for years) to deliver on budget, contracts, drain and mudtank maintenance; failed to check pump performance and screens at pumping stations during the June 2015 storm event; as staffing changed, failed to set in place procedures for weather events; failed to understand Civil Defence requirements for the most densely settled suburb of Dunedin; failed to adequately consider storm run-off from surrounding hill areas and the increase of impermeable surfaces as The Flat developed; failed to release stormwater to the ocean, etc etc……. but ultimately FAILED to put proper thought and planning to AVOIDANCE of Endangerment to the lives, health and livelihoods of thousands of South Dunedin residents.

Seriously. That’s the sort of ‘care and concern’ the gold-chained opinion-writer represents at ODT today. Further, there are Absolutely No Grounds to grease up the loophole backside of the technically inexpert Parliamentary Commissioner for the Environment.

The Listener article raises the issue of “mismanagement” during the rains of early June 2015. The liability rests at council doors.
That is a hammering public fact.

*Image: phoneshot at a diner by whatifdunedin [click to enlarge]