New star director on a spending trajectory, more user charges coming…
Remember when we just wanted our museum collections properly indexed, made searchable, accessible and displayed more readily’ —soon as possible?
Now the establishment wants expensive ‘add-ins’. But this is a great idea!

### ODT Online Sun, 3 Aug 2014
Planetarium in city’s stars?
By Daisy Hudson
Astronomers and lovers of all things galactic could soon be converging on the Otago Museum, as plans for a planetarium move ahead. The planetarium is included in plans for the redevelopment of Discovery World but has yet to be signed off by the museum’s board. […] The museum was confident it would be able to find the funding for the planetarium […] they would have a clear idea about whether the proposal would go ahead, as well as of potential designs, by the end of August. The redevelopment is set to take about two years, with a grand opening scheduled for mid-2016.
Read more

Side-section of the Peter Harrison Planetarium [Allies and Morrison Architects]

With close to one million visits being made to the Royal Observatory, Greenwich, and public demand increasing, the Observatory decided to attempt a spectacular development that would feature new galleries about modern astronomy and time, the Lloyds Register Education Centre, and a planetarium. “Through the avenue of trees, partially pushed into the ground, stands a bronze-coated cone, enriched by what looks like a patina of age, topped with a lens of reflective glass” (Telegraph). The Peter Harrison Planetarium opened in spring 2007. Public, corporate, and private sources contributed £15 million to the project. (via Brits At Their Best: Sharing the Inheritance)

█ For more images of planetariums, do this Google search. 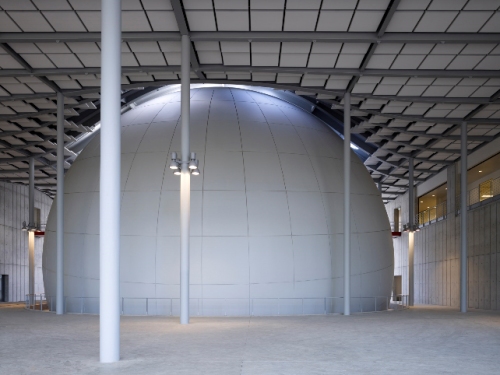 The Morrison Planetarium is the largest all-digital dome in the world with a 75-foot diameter projection screen tilted at a 30 degree angle. Thanks to immersive video technology, the dome seems to disappear when imagery is projected onto it, creating an experience more like flying than watching a movie.

“Designed by famed architect Zaha Hadid whose signature style appears to be making some of the world’s most f**kable buildings…like Georgia O’Keeffe of things you can walk inside…I guess maybe it is time things evened out a bit.” –Jon Stewart

Unnecessary Muffness Originally aired at The Daily Show with Jon Stewart (Comedy Central, 19 Nov 2013). Qatar erects one of the world’s most f**kable soccer stadiums in preparation for the 2022 World Cup, but Al Madrigal can’t even find the press box. (04:56)