You are warmly invited to the forthcoming exhibition hosted at Blue Oyster Art Project Space | Basement, 24b Moray Place, Dunedin

[public domain] Submitters may find their submissions pinned to the wall.

Gelber LuftBallon (Dunedin Research Project) is a series of new work created by Melbourne-based artist Shane McGrath.
McGrath’s practice has used rockets, planes and zeppelins as metaphors for escapism, exploration, memory and tragedy. For this series McGrath has been investigating the public debates around Dunedin’s proposed wharf hotel development. McGrath sees the issue as one that concerns the city as a whole, which has the potential to impact dramatically on the city’s future.

During the public submissions process there were calls for an on-site, tethered balloon to be used as an indication as to how tall the hotel would be. Using this suggestion as an entry point for his investigation, McGrath launched a balloon near the proposed site on Monday 15 April. In this context the balloon is not only a practical object for measuring height, but also references times of conflict (barrage balloons) which were designed to allay fears of attack and also to indicate that the city was under attack.

Gelber LuftBallon is not a didactic work or a protest, but simply a catalyst to encourage debate and add to the ongoing dialogue. The results and ephemera of the research project and balloon launch will form the core of the exhibition at the Blue Oyster which opens on Tuesday 23 April.

Watch the video at http://blueoyster.org.nz/upcoming/shane-mcgrath/

Shane McGrath has a BFA and an MFA from Massey University. In 2011 he was commissioned by City Gallery Wellington to create a permanent sculpture in Wellington’s Glover Park as a part of the The Obstinate Object exhibition. He is represented by Bartley and Company, Wellington.

Blue Oyster Art Project Space
The Blue Oyster Arts Trust (BOAT) was founded in Dunedin in 1999 as the governing body of the Blue Oyster Art Project Space that provides a high quality, dynamic program of experimental and innovative contemporary art practice. BOAT is a non-profit and non-commercial organisation that is made up of practicing artists, curators and other creative professionals. The art project space allows a diverse range of artists to work experimentally, free from commercial restraints and irrespective of the stage of their career. Blue Oyster aims to broaden the interest and understanding of contemporary arts by providing a forum for discussion and debate regarding contemporary art issues.

Anonymous commented here (18.3.13) on the likelihood of the proposed tower apartments being pitched to students from China.

In short, proposed apartments intended as ‘university college’ atop a cheapish 5-star hotel.

We’d like Sydney to publish his full article ‘Heartbreak Hotel’ at What if? – since DScene and Southland Times only reference the item, fleetingly. Too hot to handle? So Grahame, if you’re reading this . . .
[happily, we got it, read the unabridged version here]

### stuff.co.nz Last updated 14:46 17/04/2013
Hotel a ‘hostel for privileged’
By Southland Times + DScene
Apartments in the proposed hotel for Dunedin’s waterfront could end up being occupied by Chinese students – or anybody else who wants them – project spokesman solicitor Steve Rodgers says.
Rodgers fronts for Betterways Advisory, a company owned by Chinese woman Jing Song*, which is proposing to build the 28-storey, five-star Dunedin Hotel on an industrial site a stone’s throw from the city’s inner harbour. This week he defended scathing commentary about the project, levelled by Otago artist Grahame Sydney.
In an article called Heartbreak Hotel sent to DScene, Sydney voiced several concerns, many already played out during a recent consent hearing – including the hotel’s ability to achieve economically viable occupancy rates. Sydney believed Betterways was targeting the lucrative international student market, specifically Chinese students, by including 164 apartments in the project.
Sydney also complained that a promotional video illustrating the hotel concept deliberately excluded surrounding heritage buildings in its visuals. The impact on heritage values in the city was one of the major concerns raised in submissions.
Read more

*What if? notes the New Zealand Companies Office register entry for Betterways Advisory Ltd (3142026) lists Stephen Rodgers as the sole director, with LMW Trust Limited (3141813) as the shareholder. Jing Song isn’t mentioned in connection with either entity. 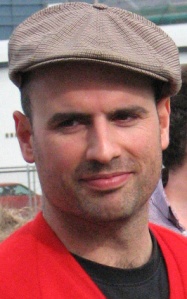 Artist sculptor Shane McGrath successfully built and flew, with the help of friends, a helium-filled yellow blimp today at Customhouse Quay in Dunedin.
Relatively still air conditions twice allowed the ‘friendly’ LuftBallon to gain maximum height – simulating, indirectly, the proposed height (96.3 metres) of the hotel and apartment tower planned for the vacant site across the road at 41 Wharf Street.
McGrath had earlier made sure the planned flight received CAA clearance.
The blimp contained smaller balloons filled with the gas to guard against a sudden downing. A small team of men, including McGrath, coordinated the length and position of the guide-lines, keeping the blimp off surrounding buildings and roads, and out of harbour waters.
The bright photogenic structure – alternately Lemon, Zeppelin, Chrysalis – hovered impressively overhead for half a day, long enough for professional photographers and camera people to take stills and recordings from the site and prominent vantage points around the city. 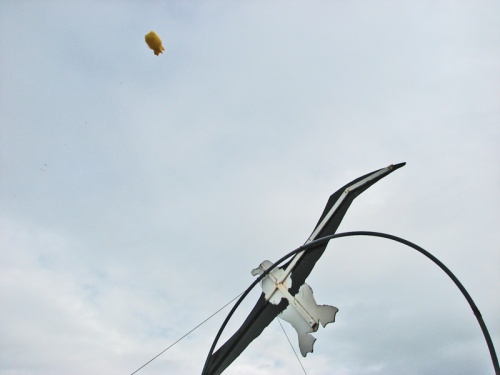 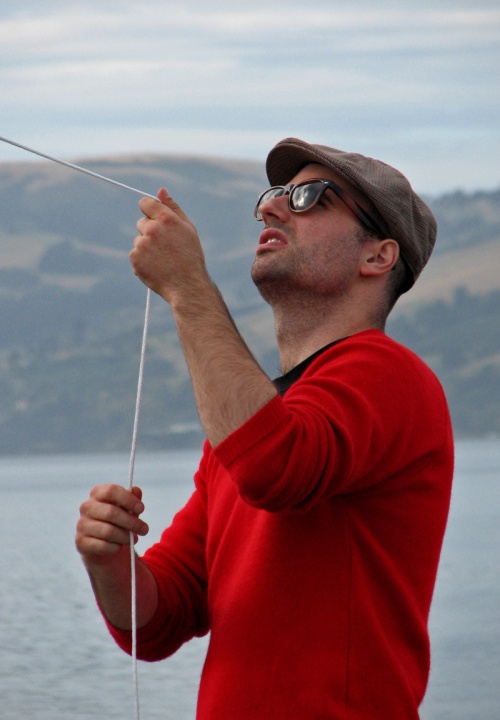 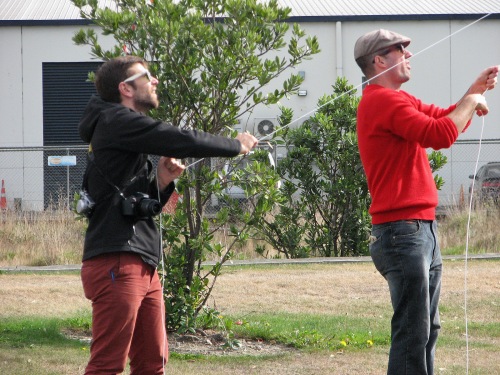 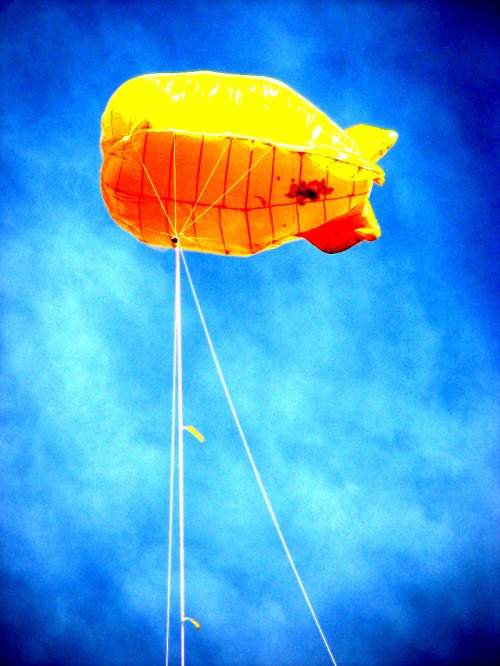 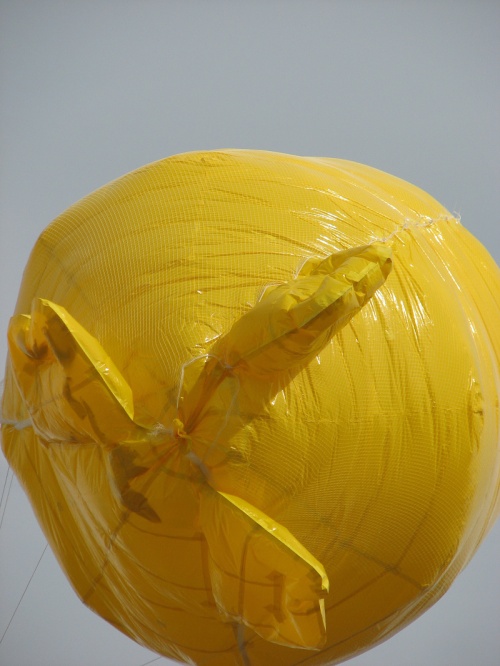 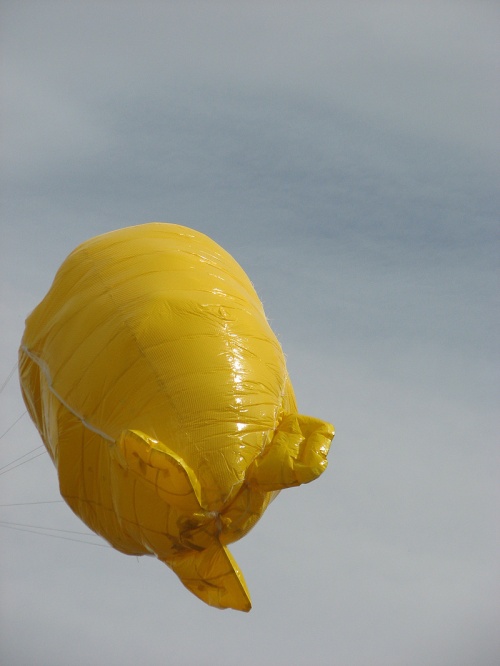 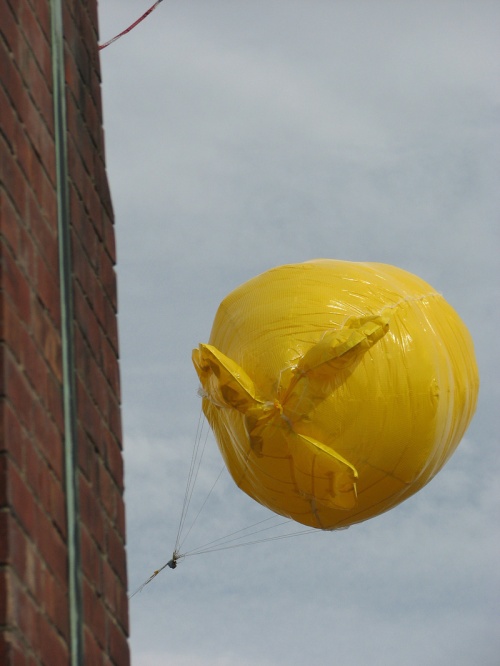 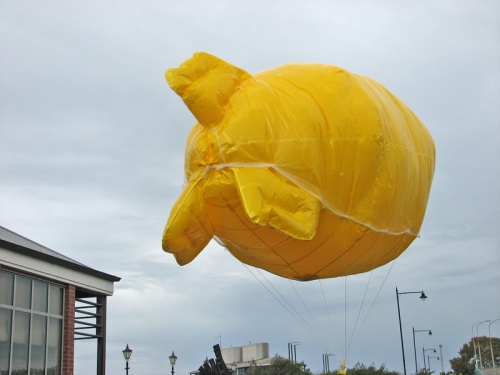 █ Enter *hotel* in the search box at right to learn more about the proposed hotel and apartment building for 41 Wharf Street.

. . . independent artist sculptor Shane McGrath has a crack at ‘height indications’ down at the Dunedin waterfront on ● MONDAY

Originally from Melbourne, McGrath completed his Master’s in Fine Arts at Massey University in 2009 and is establishing a trans-Tasman practice. In March 2012 he completed a major new public art work for a park in central Wellington, was an artist in residence at the Yarra Sculpture Gallery in Melbourne and had work included in the Sculpture by the Sea in Sydney.

29.11.10 3News — The focal point of Shane McGrath’s Fight or Flight exhibition is a phallic-shaped zeppelin. Video 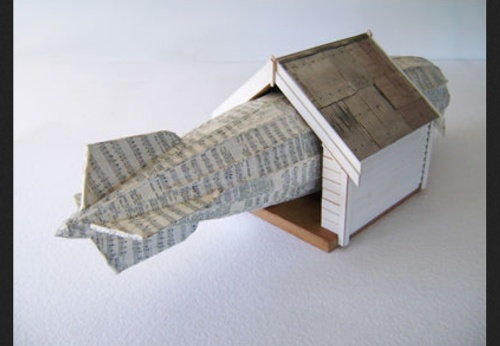