The theft of data from a website that facilitates infidelity is a wake-up call.

Ashley Madison’s sales pitch, emblazoned on huge billboards, was that the anonymity of the web could make having an affair easy and risk-free.

### economist.com Aug 22nd 2015 | From the print edition
The Ashley Madison hack
An affair to remember
The slogan of Ashley Madison, a website that arranges extramarital liaisons, is “Life is short. Have an affair.” Its home page shows a woman holding a finger to her lips. So much for promising to keep secrets. Last month a group of hackers called Impact Team stole the site’s user database and transaction history going back to 2007, and this week they released it online: more than 30m users’ names, addresses and personal details, along with GPS co-ordinates and sexual preferences. This trove of data is fiddly to download and search, but already users of the site are being outed, as journalists and activists comb through the records looking for celebrities, business leaders and politicians. A deluge of revelations seems likely in the coming days, as websites pop up that allow easy searching.
Read more

█ Users of a data map plotted by CartoDB can see how many people in their area allegedly have accounts with the adultery site. 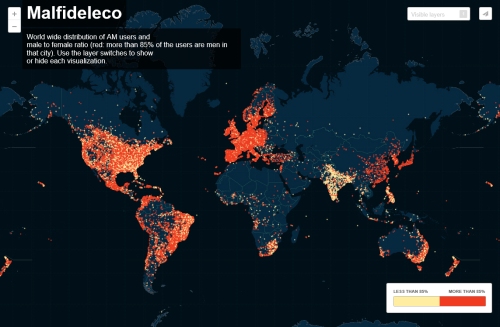 ### NZ Herald Online 8:30 AM Friday Aug 21, 2015
Do you trust your partner? Map reveals locations of Ashley Madison users
Sources: NZME, Daily Mail and wires
Millions of panicked cheaters and their suspicious spouses have crashed websites claiming to host the “cheat sheet” list of names leaked in the Ashley Madison hack. Tens of thousands of Ashley Madison account holders in New Zealanders are among the 36 million users whose personal details have been leaked online. Several searchable databases of names, emails and sexual fantasies linked to the 9.7 gigabyte data leak had to shut down within minutes of going live because they could not cope with demand. Data from the hack has even been mapped, revealing the popularity of the site in different towns and cities across the world.
Read more 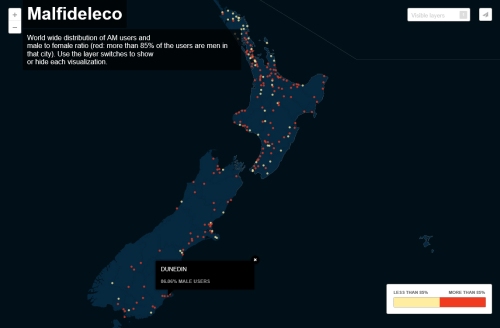