The Board of Dunedin City Holdings Limited (DCHL) is pleased to report the financial result for the DCHL group for the year ending 30 June 2014.

Highlights
● Profit after tax for the group was $12.5m.
● We have distributed to the Dunedin City Council (DCC) and its subsidiaries outside the DCHL group a total of $15.7m. This has fully met budget expectations and been achieved within the policy of not borrowing to pay dividends.
● Cash from operations remains strong at $30.1m. This was after paying the budgeted subvention payments of $7.9m to Dunedin Venues Limited.
● Total borrowings across the group have reduced by $4.7m to $621m.
● The financial result for the year reflects the hard work and focus of the staff and directors of the DCHL group of companies, which is much appreciated.

Profit after tax for the group was $12.5m for the year compared to $20.5m last year. This is a solid return for the year. The main difference between the 2014 and 2013 profit resulted from the 2013 year including a write up of approximately $7m in the value of the City Forests investment.

Aurora Energy Limited had a solid year, but profit was $1m less than last year due to the mild winter in 2013. Operating cashflow remained strong and was $4.1m higher than last year. 2014 also saw the company starting to increase investment in its asset base.

Delta’s profit was at a similar level to last year ($4.4m this year vs $4.6m last year). It has completed exiting its water and civil construction operations.

City Forests has had a strong year. Profit has reduced from $14.6m to $8.3m. This reduction in profit has been due to a lower write-up in value of the City Forests investment in the current year. The company paid a record dividend to Dunedin City Holdings Limited of $5.1m.

Taieri Gorge Railway experienced a small loss for the financial year of $51,000 compared to a surplus of $39,000 achieved last year. Operating cashflow remained strong at $433,000 and was also higher than last year.

Cash from operations has remained strong at $30.1m. Cashflow is the most critical measure as it is the basis for dividends and capital investment. The solid cash generation performance has also enabled the DCHL group to lower its net debt by $4.7m over the year.

Progress has continued to be made in restructuring the governance of the group. A number of directors resigned during the year and we need to thank them for their services. We need to specifically record the service of two directors who resigned this year after serving as members of the group’s board of directors for a significant number of years. Both Ray Polson and Ross Liddell resigned as directors during the year and contributed in a significant way to the development of the DCHL group in a wide range of roles. It is with sadness that I must note the passing of Ross in July of this year.

Given the normal operational challenges facing the members of the group the board of DCHL remain positive on the outlook for the group of companies.

Stadium: NZRU in the sights

NZRU takes a very high percentage of the returns from professional rugby matches at Fubar and other regional stadiums around New Zealand. NZRU’s Steve Tew doesn’t want you to dwell on that, he’s making money.

Dunedin’s Mayor Cull and City Councillors need to wake up. 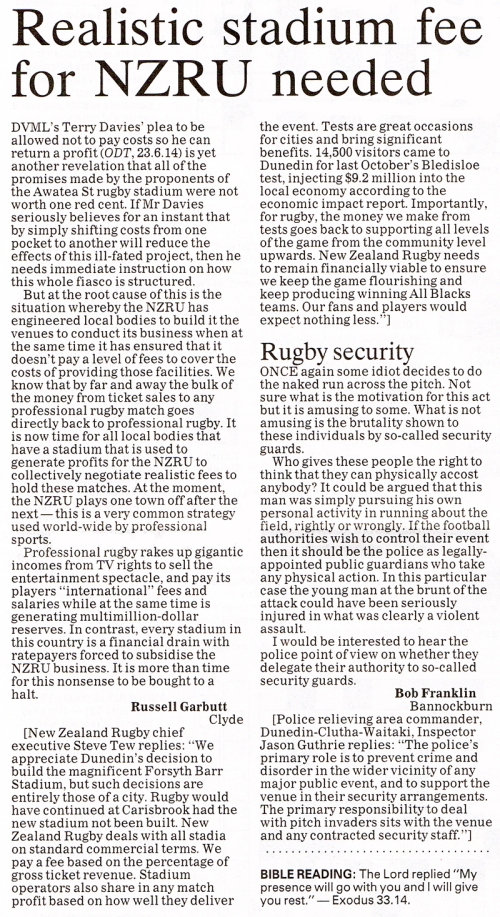