Democracy, a little strange looking here and there 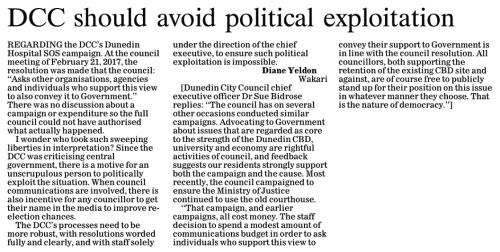 Not sure the above is the “nature of democracy”.
Ownership more often than not has rights to what Democracy might be, for better or worse. Democracy is the dull moving target around traction of tolerance and accommodation, alternately characterised by recklessness, drilling, handholding, gutless audacity and full oppositional war. And finally, perhaps, it is Comedy of Errors (the big CE) – to do with pique, vanity, providence, chess-like cunning, ill temper and quarrelsome kicks, artful dodging, strange bed fellows, lousy cracks at definition, ruthless assaults and incursions, “Territory”, chiming disgust, stiff ultimatums, the surrender to power, corruption or fraud…..and all notions, wagons, bonfires that encircle ‘the final word’ and last stands, angry trumpet votes to Brexit, chaste lookalikes, injury, ill health….. Jesus weeps.

### ODT Online Wed, 12 Apr 2017
Hospital rebuild: back off but don’t back down
By Hilary Calvert
OPINION If we asked Otago people what they most want from health services it would likely be health service delivery in the province at least as good as the rest of New Zealand. For example, whatever qualifies for an operation here should be the same that qualifies those up north. The Dunedin School of Medicine is vital to us as well. […] What if harassing of the Government in an imagined party political fashion just makes the Government determined to not give us what we want, since we will likely vote two local Labour people into Parliament this year? If we concentrate on telling the Government what we most want, and stop trying to tell it how it should deliver the services, we have a much better chance of getting the best result.
Read more

Diane Yeldon
April 14, 2017 at 11:10 pm
“Harassing of the Government in an imagined party political fashion.” Well said by Hilary Calvert. Spot on!
Here’s the meeting video for 21 Feb. Starting from 1.58.24 into the video, you can watch the discussion on the resolution which authorised the [Dunedin Hospital SOS] campaign. This was the Notice of Motion put forward by Cr Benson-Pope and seconded by Cr Hawkins.
There was no information in the agenda about how much the ‘asking for support’ would cost or how the ‘asking for support’ would be carried out. Nor did any councillors ask questions about this. Their attention was focused solely on discussing the rights and wrongs of the hospital siting (with only a couple of councillors saying they didn’t think it was any of their business.)
I can’t help wondering if many of the councillors did not understood that this ‘asking for support’ would result in unleashing a full-blown advertising campaign with leaflet drop, website and newspaper ads costing so far $12,000! I wonder if the motion had been taken in two parts with the second part only about the campaign and its full extent and costs disclosed the majority would have still voted in favour. 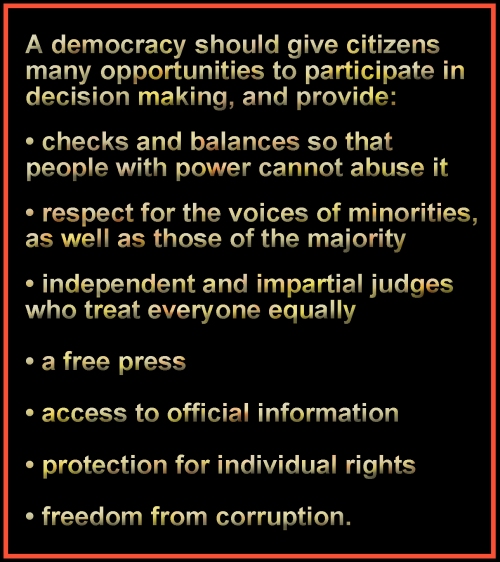 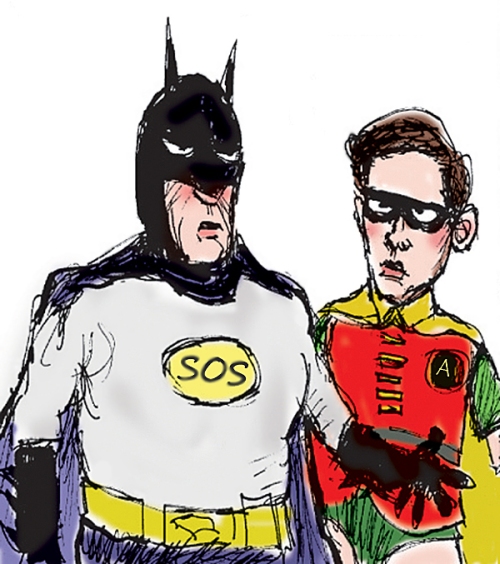 If you clear away all the smoke from the party-political bluster, bickering and name–calling arising over this campaign, has the Dunedin City Council really done anything out of order? Or were some councillors, in fact, a majority, just trying to do their best for the people of Dunedin?

Unfortunately, the road to hell can be paved with good intentions. A council communication cannot be a political advertisement.

The Electoral Act more or less defines a political advertisement as anything which persuades or encourages voters to vote in a particular way. But our democratic rights to participate in government decision-making are not limited to voting once every three years. Citizens also have the right to petition Government, make submissions to select committees and other public authorities and deliberative bodies, and lobby MPs and Government Ministers.

If local councillors had been presented with a motion which proposed the following : that the Council encourages and persuades voters to choose candidate A, they would have rightly been horrified and would have rejected it.

In comparison, a single, short and final paragraph in a council motion which proposes that the Council should ask for public support for ONLY its own preferred position on a central government decision, and that people make such views known to central government, looks harmless and is quite likely to pass unnoticed – and, in fact, did. But it is just as political. It encourages people to use their democratic rights in a particular way.

The council staff should have alerted councillors that this was the case and that such political activism was beyond the proper scope of any local body. The difference in wording may be subtle but the democratic principles involved are significant and far-reaching.

Dunedin City Council’s Dunedin Hospital SOS petition states:
“I demand that central government redevelops Dunedin Hospital in the centre of the city. The government must also make a clear commitment to retain a top flight teaching hospital for Dunedin and the wider Otago/Southland region.
Save Our Site. Save Our Services.” 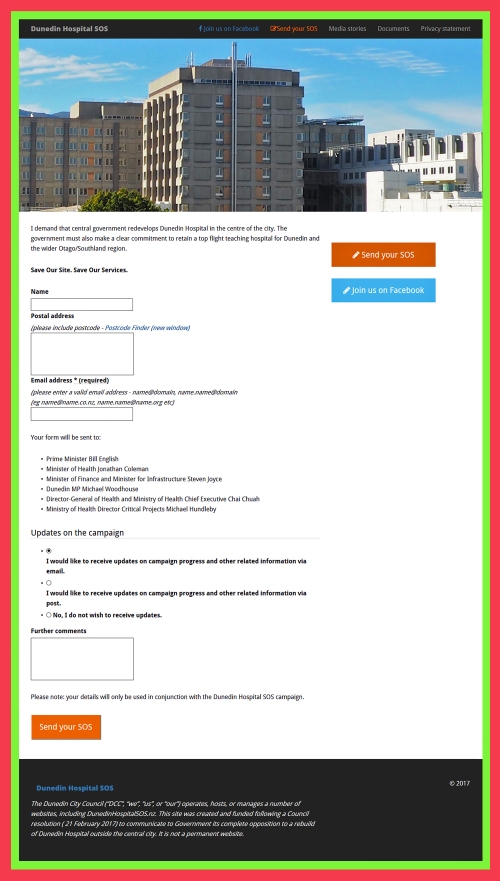 At the bottom of the webpage, DCC says:
“Dunedin Hospital SOS
The Dunedin City Council (“DCC”, “we”, “us”, or “our”) operates, hosts, or manages a number of websites, including DunedinHospitalSOS.nz. This site was created and funded following a Council resolution (21 February 2017) to communicate to Government its complete opposition to a rebuild of Dunedin Hospital outside the central city. It is not a permanent website.”

How the petition got off the ground by Council vote (21 February 2017) on the Notice of Motion: 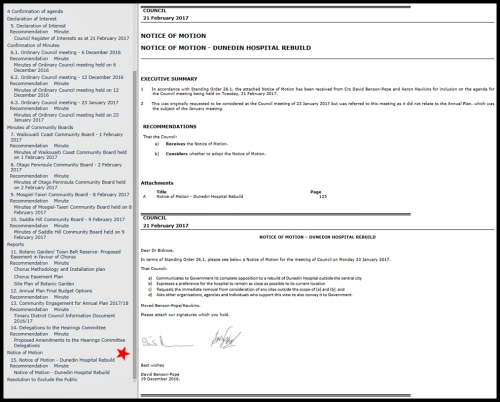 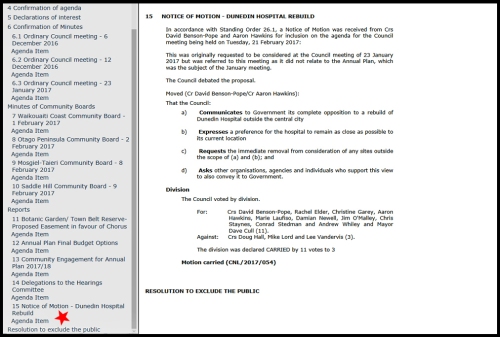 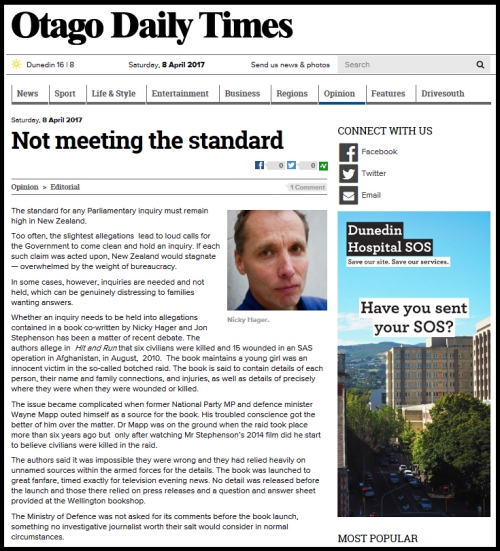 █ For more, enter the terms *hospital*, *sdhb* and *swann* in the search box at right.

Junior councillors should think carefully about how they appear in writing and how they might appear in publicity shots on Frederick St, as a band of politicos.

BRAVO to the ODT Editor: 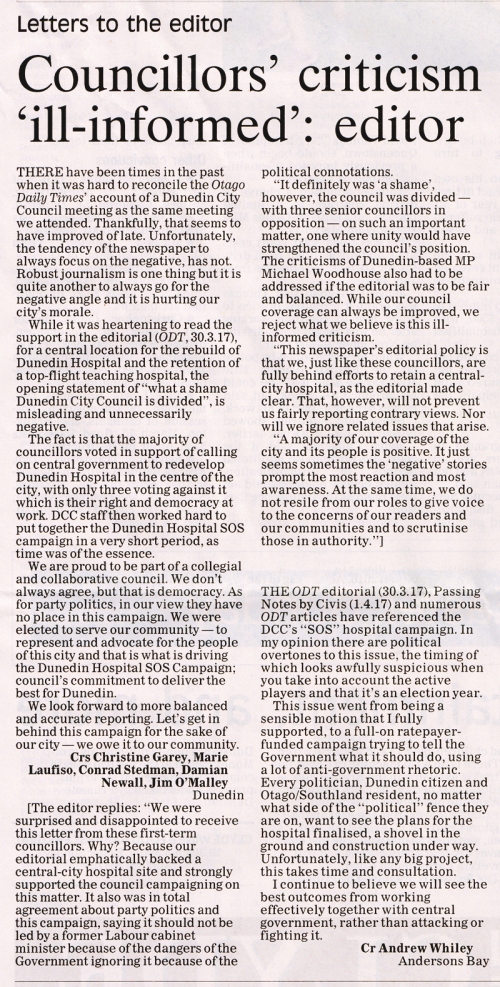 Wisely, this editorial had already put dogsbodies in their place:

### ODT Online Thu, 30 Mar 2017
Editorial: Hospital central to city’s needs
OPINION What a shame the Dunedin City Council is divided over its campaign to keep the city’s hospital in the central city. This is an issue which should unite Dunedin. The squabbling is distressing. The council has initiated an effort to keep the rebuilt hospital right in town, with three councillors, Lee Vandervis, Mike Lord and Doug Hall, voting against. Dunedin-based National-list MP Michael Woodhouse waded in late last week, implying the campaign was a front for the Labour Party […] There are two fundamental issues. First, on the siting of the hospital, and second on whether the council should campaign on that. As as been pointed out strongly on this newspaper’s opinion page by two distinguished Dunedin residents, Sir David Skegg (a former University of Otago vice-chancellor) and Emeritus Prof David Jones (a former university medical division head), close links between the medical school and the hospital are vital.
Read more 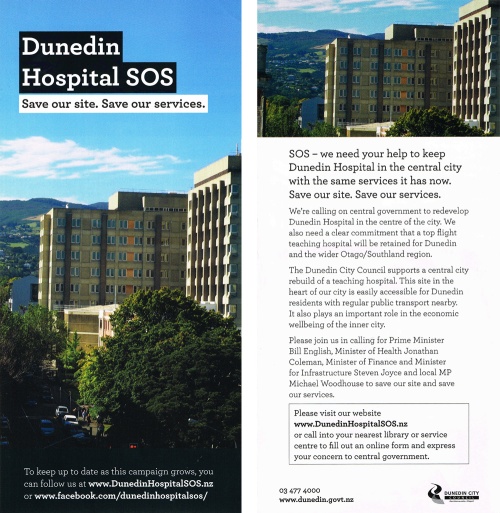 DCC says 55,000 campaign flyers were printed, with 50,000 supposedly delivered to households (however, thickish piles of flyers have been found by cleaners about town —gathering dust in corporate office tearooms and reception areas)…. 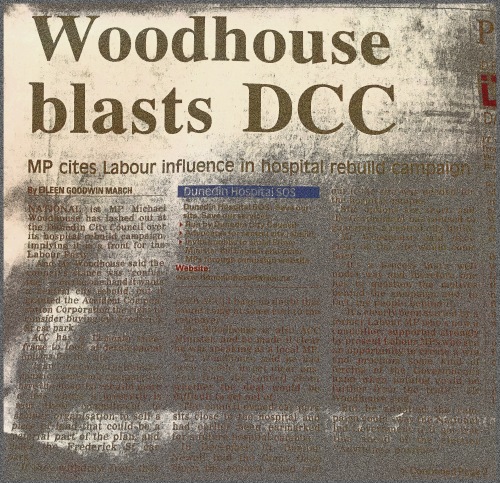 ### ODT Online Sat, 25 Mar 2017
Woodhouse blasts DCC
By Eileen Goodwin
National list MP Michael Woodhouse has lashed out at the Dunedin City Council over its hospital rebuild campaign, implying it is a front for the Labour Party. And Mr Woodhouse said the council’s stance was “confusing” — on the one hand it wants a central city rebuild, but it granted the Accident Compensation Corporation the right to consider buying the Frederick St car park. ACC has a 12-month timeframe to look at development options for the site. […] Mr Woodhouse is also ACC Minister, and he made it clear he was speaking as a local MP.
Read more

This afternoon David Benson-Pope requested an unreserved apology from the website owner following publication of an image and various comments at a now deleted post concerning the Save Our Hospital campaign that was highlighted in a newspaper story published on 25 March 2017.

The website owner unreservedly apologises to Mr Benson-Pope for the publication of this material and any resulting discomfort or distress it may have caused.

An apology will be emailed to Mr Benson-Pope shortly, copy Sandy Graham, DCC.

### ODT Online Sat, 25 Mar 2017
Woodhouse blasts DCC
By Eileen Goodwin
National list MP Michael Woodhouse has lashed out at the Dunedin City Council over its hospital rebuild campaign, implying it is a front for the Labour Party. And Mr Woodhouse said the council’s stance was “confusing” — on the one hand it wants a central city rebuild, but it granted the Accident Compensation Corporation the right to consider buying the Frederick St car park. ACC has a 12-month timeframe to look at development options for the site. […] Mr Woodhouse is also ACC Minister, and he made it clear he was speaking as a local MP.
Read more