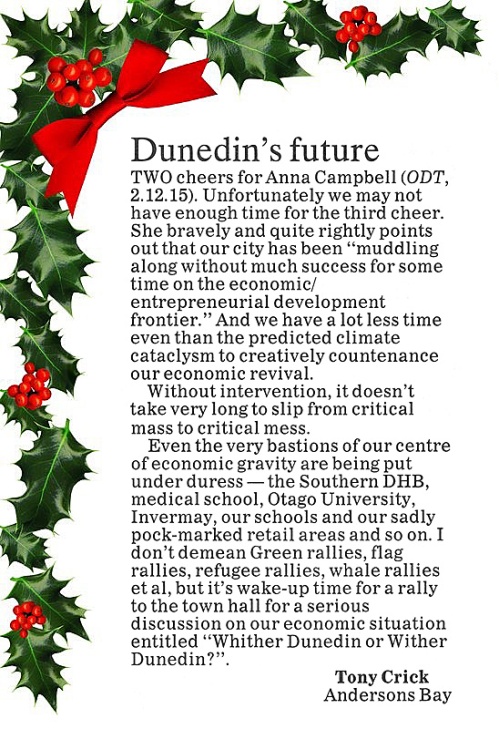 Old comments at What if? Dunedin:

Tony Crick, Julian Smith and Dave Cull set up and recruited the original nucleus of ‘Greater Dunedin’. Who do you think has run Dave and GD’s advertising campaigns since?
Calvin Oaten 2014/02/28 at 10:44 pm

“Mr Cull told the ODT that the higher spending reflected a decision to make more use of Dunedin-based marketing company Creative Advertising.” Huh? Creative Advertising IS Greater Dunedin and vice versa. Just ask CA’s Mr Crick. Are we plebs all adjudged stupid by this omnipotent Great One?
Calvin Oaten 2013/12/04 at 10:29 am

### ODT Online Wed, 2 Oct 2013
Grouping claim dismissed as lie
By Debbie Porteous
Accusations of lies are being thrown around on the issue of councillor groupings in the Dunedin local body elections. A former council staff member says he saw members of Dunedin’s only ticket, Greater Dunedin, meet behind closed doors before council and committee meetings.
Read more

### ODT Online Tue, 7 Sep 2010
Mayoral Profile: Dave Cull
By David Loughrey
(page 2) Who do you see as your supporters? You’ve got an organisation behind you?
We’ve set up a group, an incorporated society, called Greater Dunedin Inc. We incorporated it mainly to protect the name, the brand; it’s very small. There’s 11 members, and nine are standing for council, and the object of Greater Dunedin is to get good people on to council.
Read more 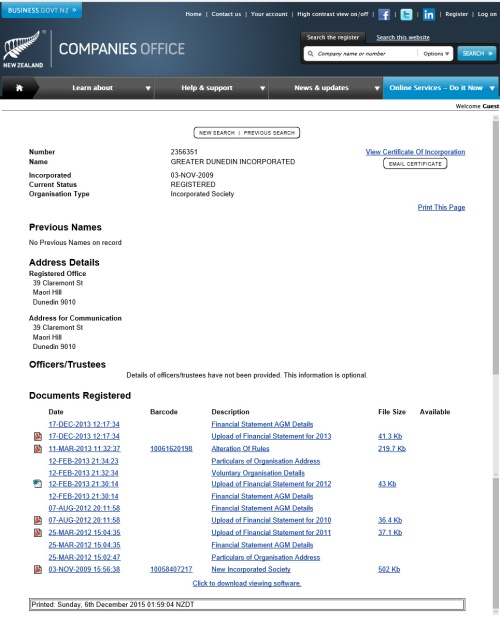