### ODT Online Fri, 14 Nov 2014
Opinion: Your say
Learning from stadium-related mistakes
By Rob Hamlin
One of the few good things about making mistakes is that you can learn from them, and avoid making the same kind of mistake again.
It is pretty clear that the FB Stadium has been a mistake on the part of the Councillors that voted for it. It has not come close to delivering the economic or social benefits that were predicted by its backers at the time. The figure arrived at in an earlier response to the above article [ODT Online] of $22 million loss per year, appears to be about right for this facility’s current annual cost to the community once all the cross-subsidies and clever fiscal two steps have been eliminated. On the social front, unlike the Moana Pool and Edgar Centre facilities that it is often compared with, the Stadium lies empty 95%+ of the time. Both these failures might just be forgiven if it was an attractive structure – but the Taj Mahal it ain’t.
Read more

### ODT Online Sat, 15 Nov 2014
Party to mark long success of sporting and social hub
By Chris Morris
Moana Pool’s golden jubilee is to be marked with a splash, and Mayor Dave Cull is confident the facility has plenty of life still left in it. The 50th anniversary of the pool’s opening on November 14, 1964, was celebrated yesterday with the unveiling of a photographic exhibition of the pool’s early days.
Read more

The ‘convenient’ shonky comparison lives on…….

### ODT Online Sat, 15 Nov 2014
Moana Pool paid off, despite price
By Chris Morris
Forsyth Barr Stadium is not the first controversial building to capture headlines in Dunedin. Fifty years ago, a decade of debate, disagreement and concerns about the cost preceded the opening of Moana Pool.
Read more

“No stadium can make money unless it has millions of moneyed sports fans living within its catchment area.” –Lee Vandervis 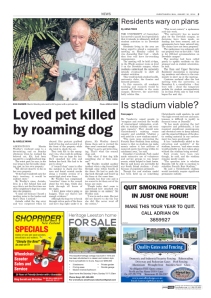 CHRISTCHURCH —This means to see the All Blacks play at home against the best opposition, we have to build a stadium that is almost double the size of what we really need just for one event per annum.

The former chief executive of the council-owned VBase events management operation, now working in the private sector, offers his perspective on the debate about a new stadium for Christchurch.

### stuff.co.nz Last updated 08:39 10/05/2013
Opinion
‘Boutique’ stadium a better option
By Bryan Pearson
I follow the various discussions around stadiums and venues with interest, and thought that the following might help inform that debate. The most recent issue to surface in this debate is about co-location versus integration. If we are simply co-locating other facilities like offices, hotels, and so on, adjacent to the stadium (as shown in the design where there are standalone buildings at each end of the stadium itself) then, while it will add life and activity to the stadium precinct, it will have little if any impact on the stadium business case.

If we are talking about integrated facilities and design which reduce the cost of building the stadium and/or deliver non-event regular income streams for the same cost/investment, then it will improve the stadium business case.

The latter sounds attractive until you start to consider the operational challenges of fully integrated facilities where the 24/7 tenants are effectively displaced on event days. Of course, then there is the issue of supply and demand for commercial office space and accommodation. Already we are seeing large city fringe commercial developments (Victoria St, Lincoln Rd). Then there is the central city where some developments are under way but many developers are already struggling to build the business case due to high costs of construction and soft demand once you get beyond about $400 per square metre.
So where will office space adjacent to the stadium fit in a market which is already showing signs of weakness and over-supply? The reality is the only thing that truly impacts on stadium viability is commercial event days.
Read more