Stadiums, in particular the FB Aurora Delta Stadium at Dunedin

This is despite the Stadium being used weekly for matches for Bayern and TS Munchen, and six World Cup games being played at the stadium.

What this tells us is that stadiums are worthless once built – are not assets, but liabilities.

If they are fully owned (no debt) and receipts go to the stadium owners then they can be profitable, but only if the owner is also the user. Thus the only hope is for the Highlanders/Otago to own the stadium.

The DCC have demonstrated that all they can rack up is more debt, more bills and more losses.

Fat chance of Otago Rugby taking over the stadium while it continues to be subsidised by DVML – the true cost of which is not made public. ORFU is now making profits but declines to pay back the ratepayers for the ‘simple things’, like black tie dinners held at the stadium in recent times. God knows what we’re paying for while Mr Davies sits atop his rugby goal post roost, clucking inanely, looking down at the pretty (untouchable) grass.

The prima donna approach is a False Economy, but not for dullards and professional rugby thugs.

Rip up the grass, put in articial turf, and let the Otago stadium be used by more codes / more sports people.

“It is a little naive to think because it is raining outside and there is water on the facilities, you can just come inside.” –Terry Davies

### ODT Online Thu, 8 Jun 2017
Unrealistic to have club sport at stadium – Davies
By Adrian Seconi
The chances of playing club sport under the roof at Forsyth Barr Stadium without an advanced booking are virtually nil, Dunedin Venues chief executive Terry Davies says. The issue came up in mid-April when the Dunedin City Council closed all its grounds due to poor weather. The Dunedin Rugby Metropolitan Council was reluctant to cancel round five of premier rugby and had hoped to play on the sand-based surfaces at Hancock Park and Kettle Park and possibly under the roof at Forsyth Barr Stadium. However, the stadium was ruled out because of scheduled maintenance. The issue came up again last month when grotty weather forced more cancellations, although premier rugby went ahead as planned. Davies said the idea club sport could be played at Forsyth Barr Stadium because of poor weather was naive. […] “The stadium was fundamentally built to deliver a real economic impact for the city. We have a number of major contracts in place with the professional rugby bodies … and there are other major events that we need to look after. On that basis we run quite a detailed maintenance schedule right through to the year it ensure we can deliver. The last thing we want to do is have a facility that is [not looking its best].”
Read more

ODT 17.9.15 Wave surge warning for Otago
New Zealand’s southern marine and beach areas can expect strong currents and unpredictable water flows from wave surges following the earthquake.
Coastal Otago residents are being urged to watch out for wave surges from a tsunami generated by an 8.3 magnitude earthquake near Chile today.
Read more 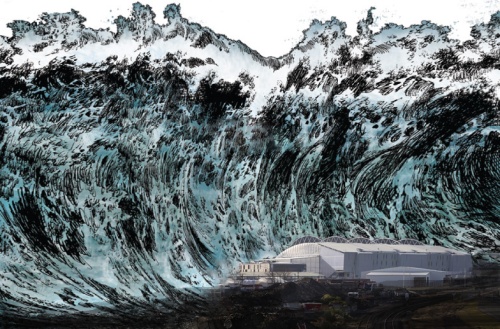 What most people don’t realise is that Dunedin probably wouldn’t be able to attract an international tsunami of this size if we didn’t have the FB Stadium. So well done to Mr Davies and all those at the DVML/DVL for all your hard work.

This is all painfully familiar…

The trials of the Phoenix Coyotes, the least popular hockey team in the NHL, offer a lesson in public debt and defeat.

### theatlantic.com Sep 7 2012, 2:37 PM ET
Business
If You Build It, They Might Not Come: The Risky Economics of Sports Stadiums
By Pat Garofalo and Travis Waldron
In June, the city council of Glendale, Arizona, decided to spend $324 million on the Phoenix Coyotes, an ice hockey team that plays in Glendale’s Jobing.com Arena. The team has been owned by the league itself since its former owner, Jerry Moyes, declared bankruptcy in 2009. For each of the past two seasons, Glendale has paid $25 million to the league to manage the Coyotes, even as the city faced millions of dollars in budget deficits. Now, Greg Jamison, who is also part of the organization that owns the NHL’s San Jose Sharks, is making a bid for the team, and would therefore be the beneficiary of the subsidies.

“Take whatever number the sports promoter says and move the decimal one place to the left. Divide it by ten. That’s a pretty good estimate of the actual economic impact.”

To put the deal in perspective, Glendale’s budget gap for 2012 is about $35 million. As the city voted to give a future Coyotes owner hundreds of millions of taxpayer dollars, it laid off 49 public workers, and even considered putting its city hall and police station up as collateral to obtain a loan, according to the Arizona Republic. (The latter plan was ultimately scrapped.) Overall, Glendale is not only on the hook for $15 million per year over two decades to a potential Coyotes owner, but also a $12 million annual debt payment for construction of its arena. In return, according to the Republic, the city receives a measly “$2.2 million in annual rent payments, ticket surcharges, sales taxes and other fees.” Even if the Coyotes were to dominate the league like no other in recent memory and return to the Stanley Cup Finals year after year, the city would still lose $9 million annually.

“It’s kind of a perverse argument that taxpayers should subsidize this because businesses depend on this deal that isn’t viable.”

This is an altogether too common problem in professional sports. Across the country, franchises are able to extract taxpayer funding to build and maintain private facilities, promising huge returns for the public in the form of economic development.
Read more