Elevated illuminated space is exciting but how long until the shine wears off – this bad taste won’t even make it to Kitsch.

“This is a great day for Auckland’s inner city cycling network. The cycleway is a new and exciting urban space, creating a city centre where people feel safer and confident to ride a bike.” –Minister Simon Bridges

Comment #13 by David Bridewell  (2 days ago)
I think the cycle – and I trust walkway – is a good idea. But whoever chose that vile colour should be hauled into the centre of Aotea square and mercilessly flogged.

### nbr.co.nz Thu, 3 Dec 2015
‘Magenta Adventure’ cycleway opens in Auckland
By Emerson Howitt
Auckland cyclists are in the pink with today’s launch of the city’s latest piece of cycle-friendly infrastructure. The $18 million magenta coloured Light Path cycleway – already dubbed “Magenta Adventure” – was opened with a ribbon cutting ceremony presided by Transport Minister Simon Bridges, followed by schoolchildren cycling along the re-vamped Nelson St motorway off-ramp. […] The off-ramp was closed in 2005 after an upgrade to the central motorway junction left it surplus to requirements. […] The Light Path features interactive lighting along one side that will illuminate the structure at night.
Read more + 34 comments

iion Published on Dec 3, 2015
Te Ara I Whiti – The Light Path #LightPathAKL
@BikeAKL celebrated the opening of #LightPathAKL with hundreds of cyclists taking to the newly opened cycleway. We went along to see their reactions and join in the festivities. Interactive Light Installation by iion http://iion.co.nz

### transportblog.co.nz Thu, 3 Dec 2015
Te Ara I Whiti – the lightpath
By Matt L
Auckland’s newest and certainly it’s most colourful cycleway (so far) was officially opened today by Transport Minister Simon Bridges. And I must say, Simon gave a fantastic speech showing he gets it, talking up the environmental, health, congestion and economic benefits of investing in cycling – this view was reinforced in discussion with him later. […] The new bridge connecting Canada St to the old offramp has been given the name of Te Ara I Whiti or the lightpath and combined is a fantastic addition to Auckland. […] One of the most surprising things about the project is just how little time it has taken from inception to delivery.
Read more

█ Video via TVNZ On Demand
Better Together: The Nelson Street Cycleway (4:51)
Get the inside track on the merging of the creative ideas of carver Katz Maihi and landscape architects and urban designers Monk Mackenzie + Land Lab, that have helped shape Auckland’s ambitious new cycleway design.
Link: https://www.tvnz.co.nz/content/tvnz/ondemand/shows/m/microsoft-better-together/s1/e3.html

### NZ Herald Online 2:14 PM Saturday Dec 5, 2015
Pedal to the new metal
By Catherine Smith
I don’t usually claim to have much in common with engineers – putting things together is not my strong suit. But on Tuesday, when I donned a fluoro vest and rode the newest piece of Auckland’s cycling infrastructure with project manager Stephen Cummins of GHD, I couldn’t get enough of the geeky details of the shared pathway, formerly known as the old Nelson St off-ramp.

It is barely a year since the Lightpath Te Ara I Whiti (it got a fancy pants name at Thursday’s opening), first got the nod. New York’s glamour former tsar of transportation, Janette Sadik-Khan, was in town to talk up how she transformed the Big Apple’s car-clogged streets to plazas given over to people and bikes. She was less than flattering about Auckland’s un-connected bits of cycle paths. The “three Ls” who shape Auckland – mayor Len Brown, design head Ludo Campbell-Reid and chair of Auckland Transport Lester Levy – keen to impress Sadik-Khan, fell over themselves to promise Barbara Cuthbert of Bike Auckland in front of an audience of over 1500 city-lovers that they would convert the abandoned motorway into a connector between the aging Northwestern cycleway, the new Grafton Gully path and the rest of the city.

The result is extraordinary. This bridge, complete with art works of pulsing lights, pohutukawa trees and a stunning perspective of the city’s favourite bits is no dull bit of infrastructure. Cummins, possibly punch-drunk from lack of sleep, reckons that a project of this complexity would typically take a minimum of two years, but every one of the suppliers was so excited by this build that they pulled out all the stops to whittle that time to eight months. Despite reporting to many “parents” (this is an NZ Transport Agency project as the stretch of road is part of the national motorway), the design team was tight and fast-moving: GHD was lead designer, with architects Monk Mackenzie and engineers from the Agency.

Early thoughts were to plunk something clunky and temporary between the back of K Rd and the old off-ramp. Fortunately, saner heads (and money from minister Simon Bridges’ urban cycleways programme) funded a much better option. Already it’s been named in the World Architectural Festival, design mags are raving.
Read more 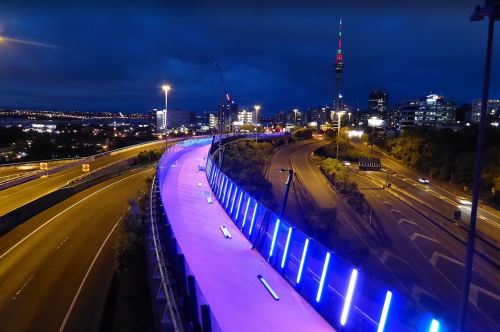