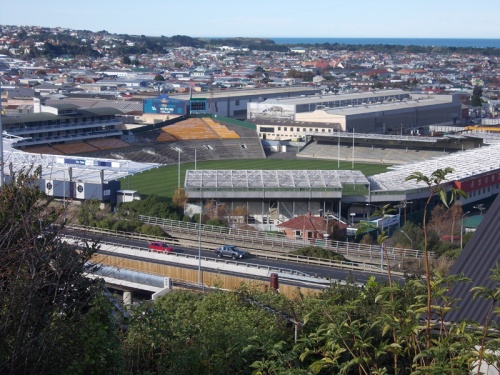 A picture of doomed dereliction – Innit? I tried to take photos of this last week, but the weather wasn’t good enough. I seem to recall that the comb lines in the manicured grass were going in a different direction then, indicating that further ratepayer-funded pampering has occurred this last week. What earthly reason can there be for the DCC to be spending money doing this on a structure that they claim they have a) sold and b) issued a demo permit for? Some seats are missing (but could be inside). The lights are gone, but Delta bought the last set anyway so why not ‘play it again Sam’? 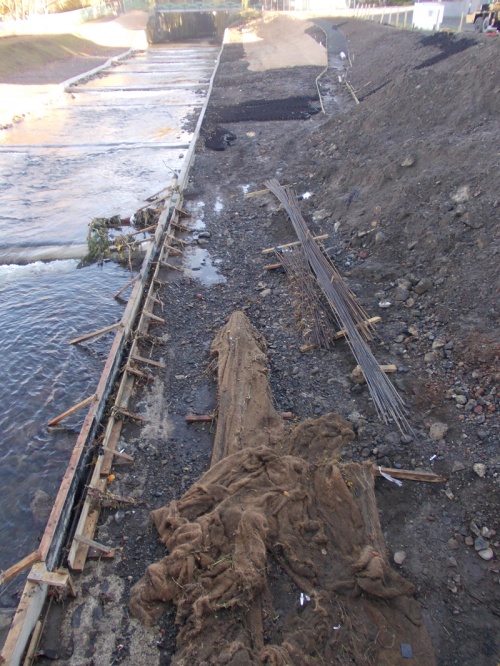 001 ‘Sad Sacking’
The results of the equally seawall-like doomed attempts by the ORC and their representatives to establish a million dollar[?] lawn in the middle of winter in the bottom of a drainage channel occupied by a major flood prone waterway (the Leith). An act of simply heroic lunacy. This is the aftermath of the minor flood last week. The proto-lawn is covered in sacking further up the river, except for the bit next to the water – that’s now wrapped around the post in the foreground. Luckily it did not end up in the harbour – although many tons of silt presumably did. No doubt the ORC will be able to issue itself with a retrospective resource consent for this uncontrolled discharge into the environment.

002, 004 ‘Washed away’
For weeks now and presumably at great expense to the ORC, the contractors (Lund if the site signs are to be believed) have been laying down what looks like micropore mat, hexagon reinforcement, and what looks like a very expensive chicken wire plastic mesh combo – stitched together. They then planted grass on it. This can be seen growing feebly on the slope in 002. Alas, the minor flood that dislodged the sacking also gently sluiced out the soil and grass from the expensively-laid reinforcements on the level parts of the lawn laid (lunacy) right up to the edge of the river.

000 gives a higher angle shot showing the artistry of this now exposed and empty (of soil) soil stabilisation system, along with the feeble grass above it. I am not sure how they will reposition the soil into this stuff short of ripping it up and starting again. Presumably if all this expensive stuff was intended to stop soil coming out, it will be equally good at resisting attempts to put it back in again by mechanical means. Oh dear!

003 ‘Mighty defences’
Here we have what is actually supposed to keep the Leith in the straight and narrow from now on. This is the concrete shuttering for an incomplete part of the bank (this shuttering is now filled with shyte from the flood). The wall when poured (one hopes after clearing out said shyte) will be a worthy successor to the St Clair seawall – it is about 12 inches tall and 8 inches thick. It is plastered onto the top of (rather than onto the front of as with the seawall) the remains of its more substantial predecessor. The lawn (in the areas where it used to be there) starts directly behind it…

005 ‘Classy concrete placing’
The mighty foot-high defences take an interesting course in the photograph taken looking up the left-hand bank from the Forth Street Bridge. I do not know if this feature-bulge in the mighty wall is the outcome of a molar-like architectural design feature to increase the organic appearance of the site or if it’s simply a concrete shuttering quality control issue. It’s your rates money – you decide.

Not to touch the Earth

Ok, misquoting The Doors’ Jim Morrison in his song by the same name from the Waiting for the Sun album, or indeed alluding to that architectural maxim of ‘touching the earth lightly’, there has been criticism of the new stadium designs by some that “The revised ‘building’ is a large ‘tent’, there’s no other word for it.” {Ian Smith, renowned old codger}. Others have suggested that the new stadium blocks the people from the Water of Leith and Waterfront, and for this alone it’s an affront to the people of Dunedin (whom apparently have this close connection to industrial landscapes and concrete encased waterways).

From the start I must remind you that the original intention for this blog, was to be critical of the design with the hope that they will come up with something more stunning. I was hoping that the likes of a Lord Foster could be tempted here to take up the design challenge – and then my cat awoke me from my daydream. I’m still not a huge fan of the design, but it has come a long way from the original renderings, and despite what others say, it does not destroy the connection to the Leith that others allude to. It is what it is, a sports/entertainment complex, with some nice subtle touches and appropriate dose of brutality giving a stadium what it should have, a sense of enormity and occasion.

So let’s have a look at the current surrounds of the two areas and buildings. What is so special about the two that one requires the virtual preservation of an ageing make-piece stadium, while a hands-off attitude to a polluted and inaccessible stream is deemed good for the people of Dunedin at the other site.

One an industrial wasteland where decrepit and bygone go hand in hand with walls and barbed wire fences, the other… well it’s exactly the same.

It’s a nice start at least, great graffiti near Carisbrook brings life to a very drab post industrial wasteland where scrap is gold, for both the Railway yards and the scrapyard, unfortunately not for the Otago Rugby Union.

Ok, that’s not fair, a railway over bridge is hardly Carisbrook’s fault. So what about the current stadium is worth keeping…? 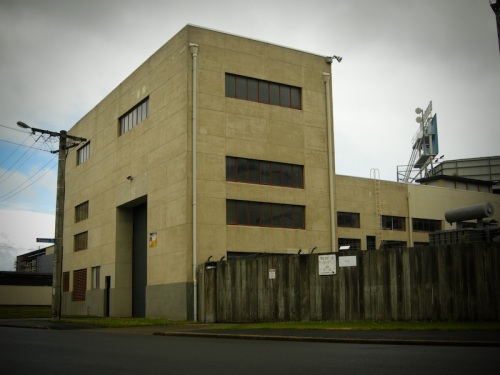 Some have suggested that fuel storage tanks near the new stadium could serve as a target for terrorism. How about the huge substation within the grounds of Carisbrook, they make one heck of a mess if blown up, and I can’t see the flimsy wooden palings holding out much of a resistance.

Still it could be worse, there could be massive great factories with hollowed out shells of train carriages for the patrons to view.

If they need a bed after the game, the current site is more than accommodating.

Nobody could tell me that the current building is a picture of architectural brilliance that should be saved.

If only this was the Centre National d’Art et de Culture Georges Pompidou, alas.

There’s some nice shrubbery around the back (if you are a colonialist that is and gorse is your thing).

Still if the staircase to nowhere isn’t your thing, there are the doors to nowhere. These are both historic and an art installation, or indeed like the Tardis, if you could get through the incredibly small openings you’d be treated to the vast emptiness of under the stand.

They are quite cool really and are a link to the past.

People must have been much slimmer back in the day… 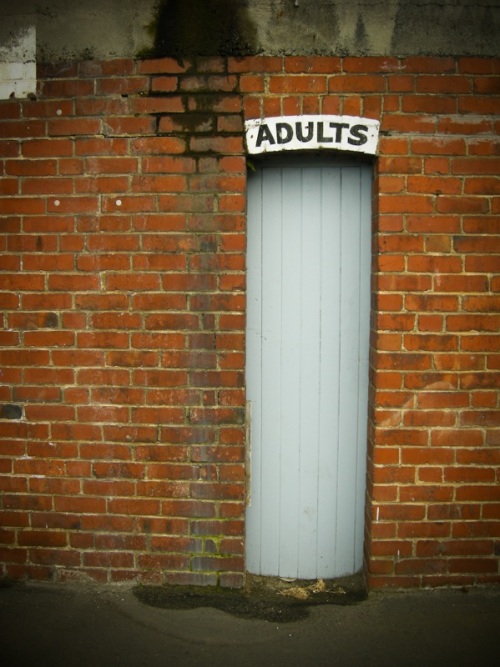 They are great though aren’t they… 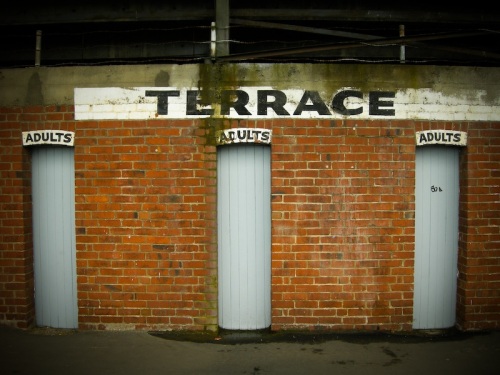 There’s a little bit of architectural symmetry at the end of the stand.

Someone slapped on a pretty ugly impenetrable massive wall all the length of one stand. Yet another architectural add-on to the mishmash that is Carisbrook. 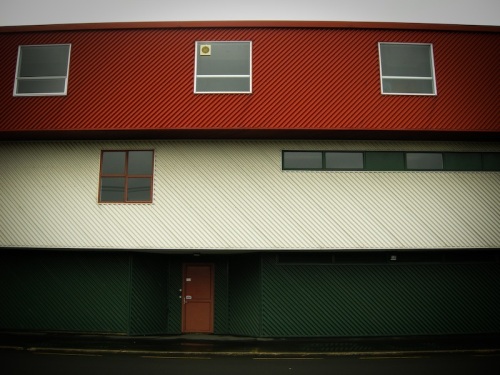 And yet another stadium style.

And another, I like this pic, could be any old grey English football stand from the lower divisions.

Still it’s important to see the advertising from across the stadium and in the railway yards. 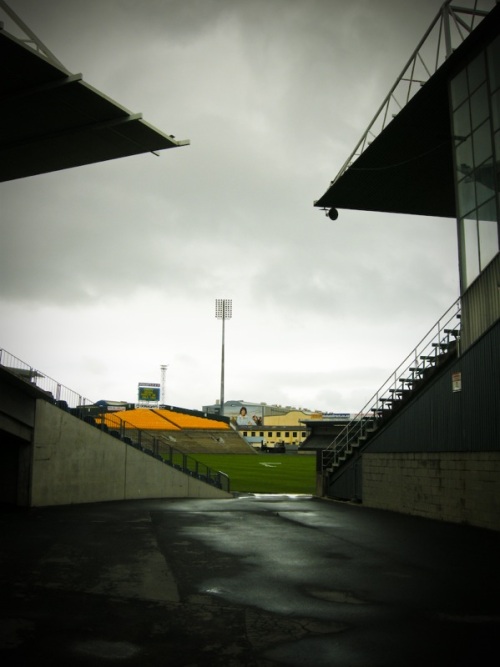 So that’s the current rugby stadium, what about the new stadium’s surrounds and the current access to the Water of Leith. Remember many have criticised the stadium for showing a massive ugly back to the Leith, this is insulting to the people of Dunedin. So if you were to walk down the opposite bank of the Leith and look to where the stadium will be, this is the back you see at the moment.

Yeah these are so inviting and vibrant at the moment. Like the way they lightly touch the earth, they mould into the surrounding location and speak to the stunning architectural heritage that is Dunedin. 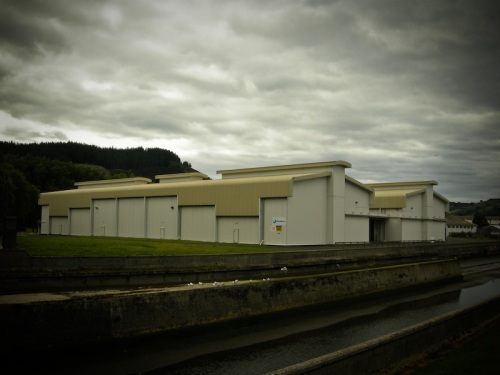 Looking at what will be the back of the stadium, at least this building plays with some iconic kiwi materials. 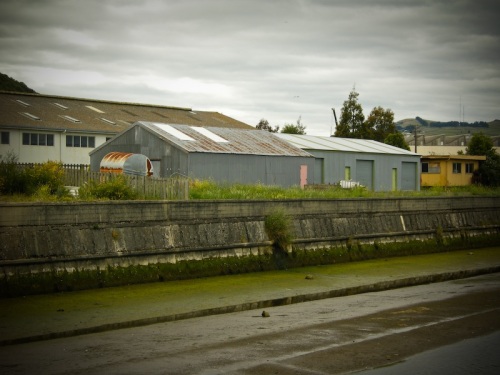 They have a shed out the back with a working toilet though, that’s handy… 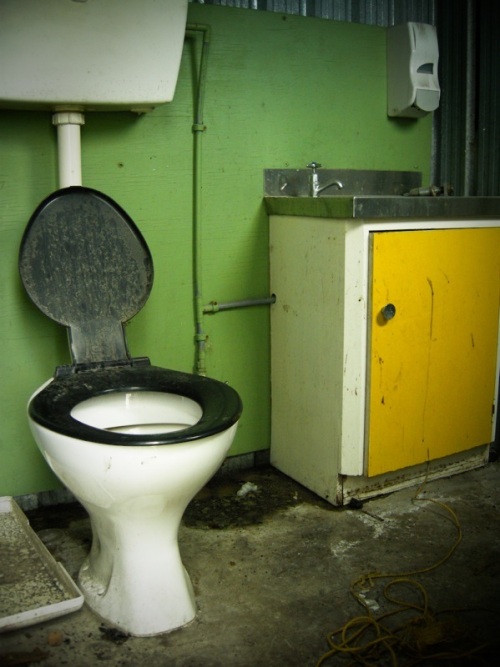 There’s a pile of interesting rubbish, I like the cross-stitch Pluto dog.

You could even find parts for that troublesome motor of yours.

Some buildings only need a lick of paint here and there, and some wall panels, and a door not scorched and some glass, but that’s cosmetic really. 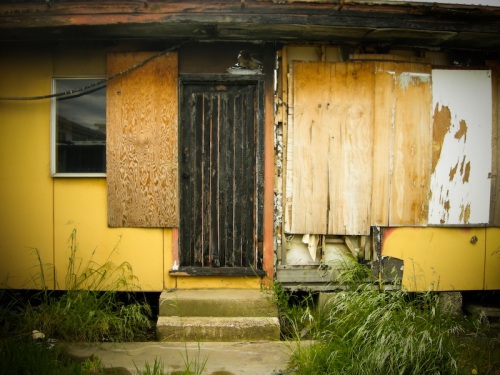 A little unfair I know, so back to the connection by the people to the Water of Leith. Presently if you were to travel down past Anzac Ave and turn into this area, the closest you get to the Leith here is via these walls. You can actually see right through if the doors are open. 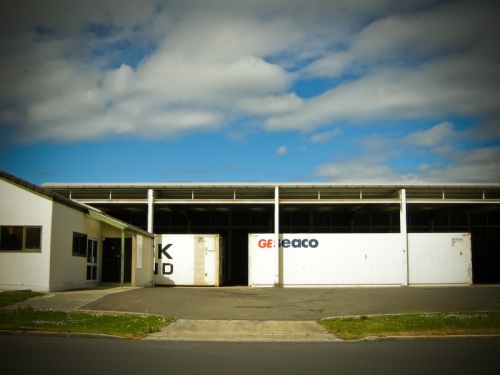 Still it could be worse, there might just be massive concrete walls between the street and the Leith…

some don’t quite speak industry or architectural heritage, somewhat utilitarian in their construct…

some speak a little more to the industrial area

some really speak to this…

some not only speak to the industrial past of this city, they come with smell-a-vision in the form of sheep-o-rama…

Actually this building has a proud history and has served the Otago region proudly. This is however the face it presents to the Leith…

There’s a nice wall to place some modern art on…

At least it’s facing the Leith, rather civic-minded of them to have that art facing the river.

The infamous connection to the Leith and the Waterfront is even stretched a little by the local yacht club. Nice views of the Peninsula Hills though….

Some have objected to the ‘University Creep’ that they see worrying. Looking back up the Leith, this is how the University and Polytechnic look and connect to the Leith. At least it’s more alive. 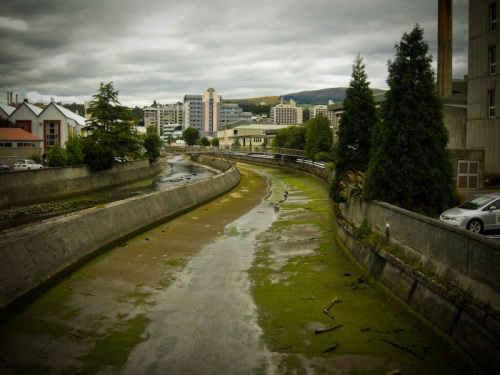 There’s some classic University buildings that at least speak to the concrete architectural heritage of the New Zealand modernist movement. 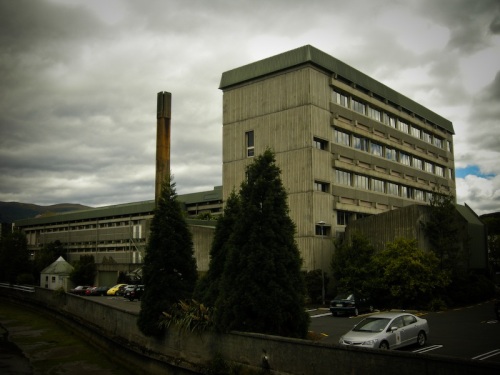 Not all the buildings surrounding the Leith speak to the surrounds, however they have become target practice for the Giant Albatross that make Dunedin such a famous tourist trap. This is what you see if you were walking to the new stadium across the Leith. Some buildings just talk to the surrounds more than others eh? 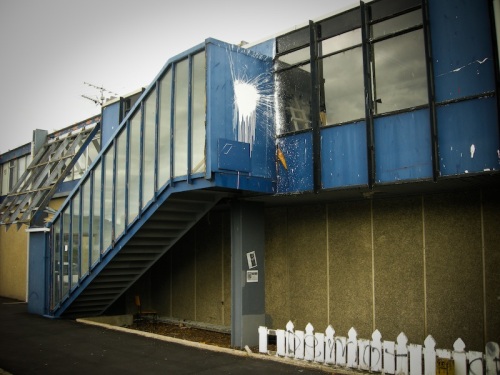 Others have just been peppered by smaller seagulls…

There’s a reference to the transport history of Dunedin… 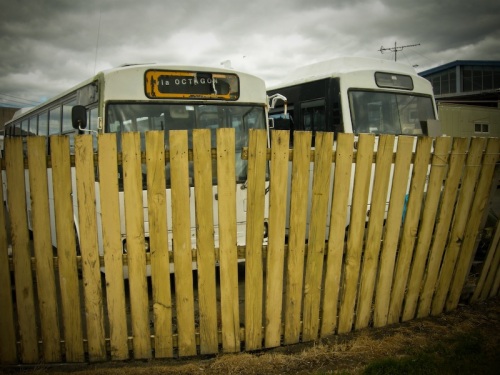 and reference to a bygone era of industry. 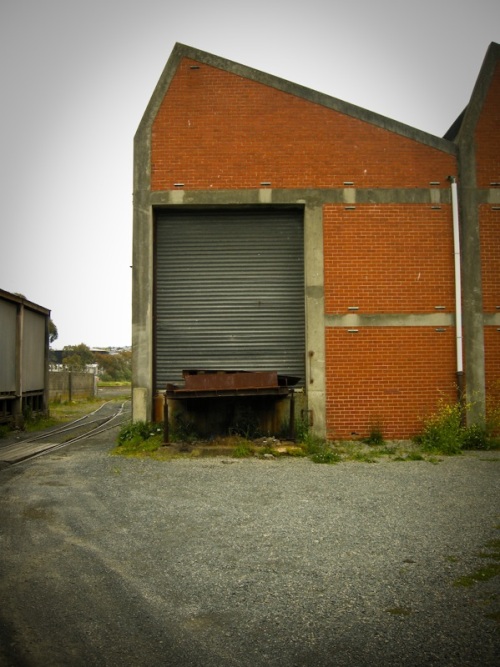 But in the end it too is a none too hospitable industrial landscape and not the mytical connection to the Water of Leith or Waterfront that we have been warned that will be lost if we build the new stadium. 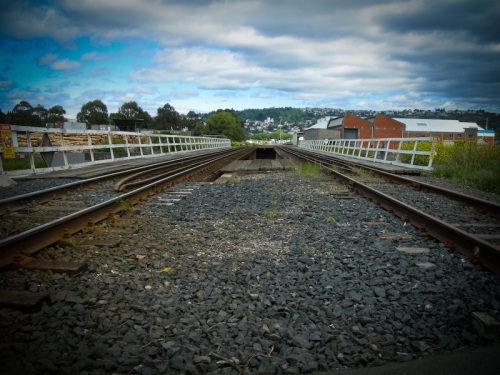 Could be worse, the stadium could be destroying thriving industrial land.