### Stuff.co.nz
Last updated 15:04, June 1 2015
Weekes triplets grandfather awarded Queen’s Service Medal for service to community
A Wellington community stalwart, who lost three grandchildren in the Qatar mall fire, has been recognised in the Queen’s Birthday Honours. Rod Turner received the Queen’s Service Medal for service to the community, including a long career in the Army and dozens of volunteer organisations. The honour recognised “his leadership and selfless dedication to the community”. Turner spent 22 year in the military, rising to the rank of Lieutenant Colonel, before retiring and spending nine years as chief executive of the Children’s Health Camps.
Read more

The piece of skirt responsible for funding irregularities* around the Centre of Excellence for Amateur Sport [for Professional RUGBY] has claimed a QB Honour. Paperwork showing this fraud is held independently. 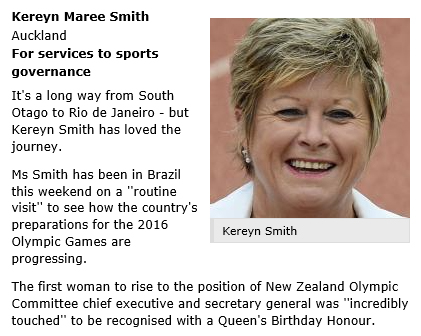 More at this ODT Link

Awards all round for those associated with gambling, pokies, serious audit failings and the negative findings of the NZ Gambling Commission.

Sad as the circumstances are for Ron Turner, he was a TTCF Trustee who approved grants to the Centre of Excellence for Amateur Sport in the hope of gaining ORFU’s pokie business after the ORFU had purchased the South Auckland Jokers Bars for about $3 million and so were desperate to align themselves with a pokie trust that would agree to illegally approve all the profits from those bars back to the interests of the ORFU.

The DIA investigated these arrangements and deemed that ORFU had an interest/ownership in the bars and therefore could not receive any proceeds from those bars. Facing potential financial disaster it would appear Kereyn Smith and other cronies associated with the ORFU agreed to front a new trust to counter DIA action.

Ex employees of ORFU, have confirmed that their contracts and pay were suddenly transferred over from the ORFU to the Centre of Excellence. The COE trustees then submitted grant applications to TTCF applying for salaries and costs that had previously been with the ORFU and avoided DIA scrutiny.

According to sources and documents, the very first grant of $500k from TTCF was needed and used for ORFU to meet its financial obligations to complete the purchase of the Jokers Bars and Ms Smith signature appears as sign off for the accountability.

Another TTCF trustee, Warren Flaunty, NZ’s most elected man, was convicted of careless driving after causing the death of a young motor cyclist in West Auckland in 2010.

The CST’s latest financial accounts – link to full financial statements and a copy of the summary below [click to enlarge].

### DScene 3 Oct 2012 (page 3)
DIA says no wrongdoing
By Wilma McCorkindale
Dunedin man Russell Garbutt questions the Department of Internal Affairs (DIA) investigations into alleged pokie rorts involving Otago sporting organisations. Garbutt, a former chairman of Sport Otago, said the DIA told him at a meeting in Wellington earlier this year it had a major investigation under way into an alleged series of complicated transactions allegedly directing pokie funds through an organisation called the Centre of Excellence for Amateur Sport.

“It is abundantly clear, in my view, the Centre of Excellence was operating for the ORFU,” Garbutt said.

Related pokie grants were administered by The Trusts Charitable Foundation. It has since been revealed the [Centre of Excellence] was applying for grants [funded] by pokies at certain Auckland bars on behalf of the Otago Rugby Football Union. It was also revealed the ORFU had interests in the bars.

She apparently hopes DCC ratepayers will soak up the cost of her empire building dreams.

D Scene, hello! This is NOT a $198 million stadium precinct – do your sums or read other media news of the spiralling stadium cost. We don’t want to use the words pig ignorance.

### DScene 3-3-10 (page 6)
Indoor pool mooted
By Michelle Sutton
An indoor swimming pool has been mooted as a second stage development at Dunedin’s $198 million stadium precinct. The NZ Academy of Sport South Island, headquarters in Dunedin, confirmed to D Scene that it would like a pool included in the stadium precinct, where it hopes to be based at in the future. The Awatea street roofed venue – branded the Forsyth Barr Stadium at University Plaza – is currently under construction, with a August 1 2011 Rugby World Cup deadline.
Meanwhile, as a pool at the stadium dvelopment is suggested, Dunedin City Council is also reviewing its pool facilities.
{continues} #Bookmark