“The effective operation of the OIA is crucial to our system of open and democratic government, and this review will scrutinise how things are currently operating and set out a framework for systemic improvement where deficiencies are identified.” –Beverley Wakem, Chief Ombudsman

### NZ Herald Online 2:11 PM Tuesday Dec 16, 2014
Government offices selected for OIA review
By Isaac Davison – NZ Herald political reporter
The Chief Ombudsman says a major review of the Official Information Act will scrutinise all 27 government ministers’ offices.
Dame Beverley Wakem today began her review of the way the public sector used the OIA, which she first announced in August.
Twelve government agencies have been selected for formal review, based on their size, number of OIA requests, complaints, and other criteria.
A further 63 agencies and all ministers’ offices have been asked to complete a detailed survey. At least one agency cited for good OIA practice would be included in the review.
The Ombudsman’s office would also seek input from past and present public servants, Opposition parties, journalists, academics and others.
Dame Beverley said the goal was to assess the quality and integrity of OIA practice in the public sector and to address any issues that were found.
Read more

John Key’s Godzone and the OIA

A very experienced political journalist told me: “The whole culture of the Wellington public service towards the OIA is governed by two things – the need not to embarrass your minister or your department (putting your chances of promotion or even your job at risk ) and the need to uphold the law, which public servants are more conscious of than you might think. The result is that public servants block requests for as long as they can and delete as much as they can using whatever section of the OIA act that they can.” –David Fisher, NZ Herald

### NZ Herald Online 2:56 PM Thursday Oct 23, 2014
David Fisher: OIA a bizarre arms race
NZ Herald journalist David Fisher gave the following speech to an audience of public officials in Wellington on October 15. We republish it here to help the public understand the systematic difficulties faced by those seeking information on their behalf.

Good afternoon everyone. I am David Fisher, a reporter with the NZ Herald. I have worked as a journalist for 25 years, mainly in New Zealand but across a number of other countries.
I think there’s some value before I start in placing a context around the current situation in relation to the media and the OIA. In doing so, it should be said each of the following allegations is denied.
At the moment, there is an inquiry underway into whether a blogger gained some advantage in receiving information from the SIS for political purposes. There are also allegations of preferential treatment over the OIA involving the same blogger and the former Justice Minister.
The police are also facing allegations of trying to cover up juked stats by burying an OIA. And a former Customs lawyer has said his organisation preferred to let requests languish in the Ombudsman’s office than dealing with them.
In the 25 years I have worked as a journalist, there have never been so many questions, or such a loss of faith, all at once.
Read more 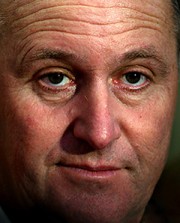 I see that the mighty NZ Police have now decided to prosecute Nicky Hager over the fact that as a journalist he will not reveal who gave him copies of the emails that implicated so many of the National Party in downright crude manipulation and God only knows what else. Even that very friendly Speaker of the House has been forced to find that Key is a devious, slippery sod by not revealing his relationship with that scumbag Cameron Slater (watch the interesting exchange at yesterday’s question time here. http://www.inthehouse.co.nz/video/34526)
Isn’t it extraordinary that the NZ Police – such an independent body of public servants – jump so quickly whenever Donkey Jonkey and his mates want action, yet they are pleading under-resourcing for really serious crimes? Remember the infamous John Banks (you know, the little forgetful coot from Auckland) cup of tea PR stunt with Key? Key lays a complaint about the recording and the cops jump immediately. Collins, Key and others are shown to be dirty manipulators in Hager’s book and the cops immediately follow up. And how many others could say that their well-documented complaints have been diligently followed? I know of a few for starters, but let’s start with the Crewe murders and the bent cops who planted evidence. Did the cops diligently pursue anyone else when Thomas was pardoned? Not even when Rochelle Crew asked them to do so. The two bent cops were praised for their integrity and diligence by the very top cop after they died.
I could go on, but the perception out there is that the cops are politically driven.

My conclusion (which should sound vaguely familiar) – our priorities as a country are completely screwed. If we put as much energy into cracking down on economic crime as we did chasing welfare cheats – we could afford a proper welfare system…. –Anthony Robins, The Standard 21.10.14

█ Listen to a full discussion of the document on Sunday Morning (48:55) {Citifleet gets a sound bite}

At the beginning of last year the then Minister for the SFO, Anne Tolley, was reported as saying that a number of Government ministries had been working for two years on a report quantifying the cost of economic crime and it would be presented to Cabinet in the near future.

But the report did not make it to Cabinet and was not released.

Radio New Zealand obtained a draft copy of the SFO’s report under the Official Information Act. The methodologies that would have made it possible to calculate the total costs were redacted.
However, Radio New Zealand has also obtained a copy of the report with the estimated costs of the various types of economic crime included – which put the total cost of economic crime at between $6.1 and $9.4 billion.
The report noted that was more than twice the combined annual budgets of police, the Department of Corrections, and the courts; more than the total net profit of New Zealand’s top 200 companies and top 30 financial institutions; or the equivalent of $2000 for every adult living in New Zealand.
Read more 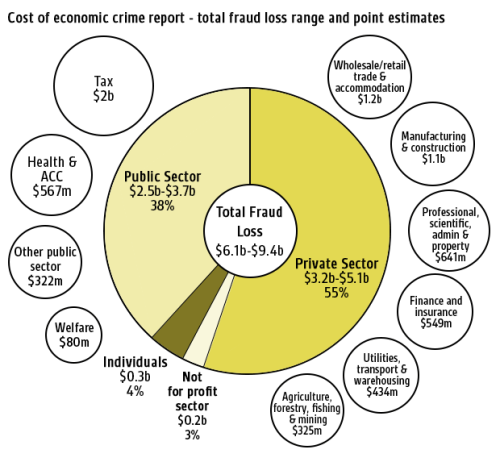 [Graphic: Radio New Zealand – some estimates in the report] 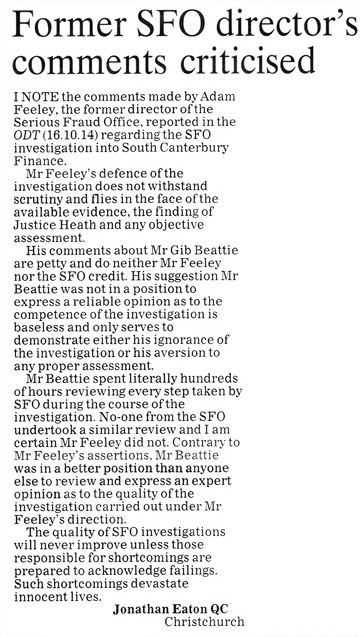 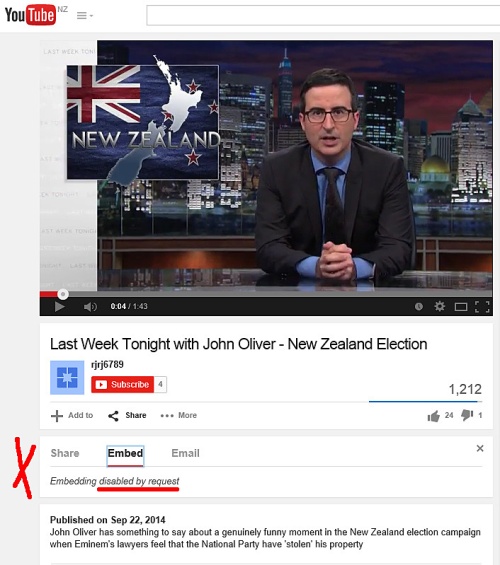 ### tvnz.co.nz Published: 7:34AM Tuesday September 23, 2014
US show mocks NZ over accent and National’s Eminem stoush
Source: ONE News
A British comedian has taken aim at an issue the National Party faced during its political campaign. In a clip posted on YouTube, John Oliver, who hosts the US show The Last Week Tonight, says New Zealand has re-elected Prime Minister John Key on Saturday, “despite a turbulent campaign with a major scandal that engulfed him earlier this week”. He then plays a ONE News clip, in which Wendy Petrie says: “Rap superstar Eminem’s become the latest to take pot shots at our Government.”
Read more 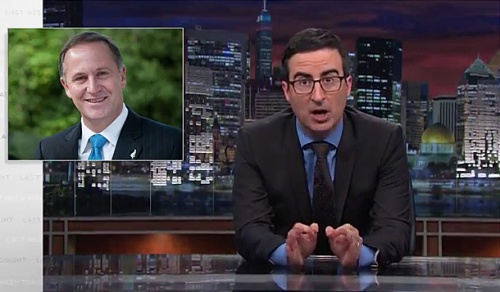 What if? swayed by celebrity, loveliness —and dirty politics

“We may as well kiss democracy goodbye” –The Standard
By NATWATCH, published at 8:13 am, September 19th, 2014
The words of the title of this post are those of Ombudsman Dame Beverley Wakem …. Yet another typical scandal from the dirtiest government ever seen in NZ. Read more + Comments

### NZ Herald Online 5:30 AM Friday Sep 19, 2014
Ombudsman ‘appalled’ by ex-Customs lawyer’s OIA allegations
By David Fisher
A former Customs lawyer claim that he was told to bury bad news matches similar stories which have sparked a wide-ranging inquiry by Chief Ombudsman Dame Beverley Wakem. She said she was “appalled” by Curtis Gregorash’s claim. “Having said that one of the reasons I am undertaking of selected agencies in respect of their OIA practices is that anecdotally a number of people have told me similar stories,” she said. She said a planned inquiry to be launched after the election could see the Ombudsman’s office using its Commission of Inquiry powers to compel evidence to be given under oath were there signs information was being hidden. “Ministerial offices will be figuring in our inquiry and that is all I will say.”
Read more 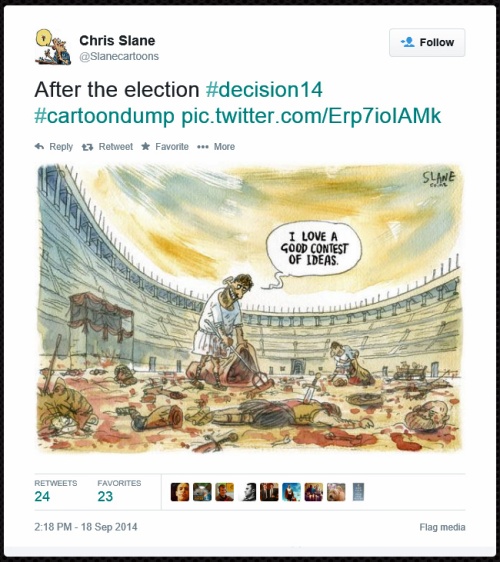 Whistleblower Curtis Gregorash said he was subjected to an internal investigation after releasing information about Dotcom sought by the NZ Herald through the Official Information Act. The information released saw Customs staff discuss earning “brownie points” by passing on Dotcom information to the FBI.

### NZ Herald Online 5:30 AM Friday Sep 19, 2014
Ex-Customs lawyer claims he was told to bury info that could embarrass the Government
By David Fisher
A former high-ranking Customs lawyer says he resigned from his job after allegedly being told to bury information that could embarrass the Government.
Curtis Gregorash said he was told by senior Customs executives to refuse Official Information Act and Privacy Act requests, which he believed was at the direction of former Customs Minister Maurice Williamson. It comes at a time the Prime Minister’s office is under inquiry over the release of intelligence material through the OIA and accusations that former Justice Minister Judith Collins was manipulating OIA responses for political purposes. [Mr] Gregorash quit his role as Customs’ chief legal counsel in March this year after more than a decade as a government lawyer.

The lawyer turned whistleblower said: “I’ve sat on it for a long time. But the story itself is so awful it needs to be told. I think people really need to see what ministers and some senior executives do.

He had decided to speak because he believed the alleged instruction “was unlawful”, undermined the way the public service was meant to operate and was given for what was ultimately political reasons. “The direction came down (from the minister) through the CEO (Carolyn Tremain) and group manager (of legal services) Peter Taylor to me saying ‘you don’t release anything – I don’t care what the OIA says, I’d rather fight it in the courts’.”
Mr Gregorash said the alleged instruction came during a briefing from Mr Taylor to the legal team in which he referred to Ms Tremain and meeting with Mr Williamson. “I resigned over it. I couldn’t stare my staff in the face and say this is actually serious conduct that’s being presented to you in a lawful way.”
Mr Gregorash said the alleged instruction to withhold information was general – but became specific in relation to “sensitive” issues, including entrepreneur Kim Dotcom, wanted for copyright violation in the United States. “Mr Taylor directed me to withhold all information and pass the same direction on to my team.”
Read more

● In the public interest, lengthy citation of articles by David Fisher at New Zealand Herald (APNZ).