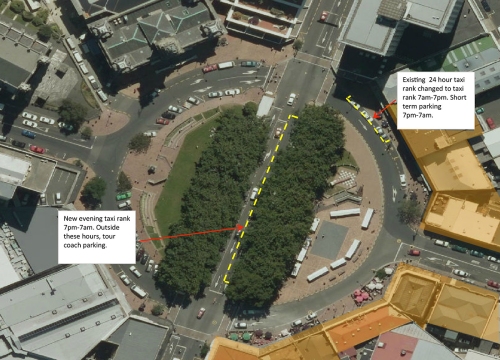 A new location for the evening taxi rank in the Octagon will be trialled for three months. From tomorrow, the evening taxi rank will move from outside the Municipal Chambers and Civic Centre to the central lane of the Octagon, where tour bus parking has been provided. The rank will operate from 7pm to 7am, Monday to Sunday. During the day time, the taxi rank will operate from the current location outside the Municipal Chambers and Civic Centre. Dunedin City Council Acting Group Manager Transport Richard Saunders says the covered walkway will provide shelter for people waiting for taxis. There will also be a sign to show where the taxi stand is and the area is monitored by CCTV.

“This proposal has been discussed with taxi companies, local businesses and the Police, and there is a lot of support for the trial. The trial site has several advantages over the current site and we expect it to be popular with the public too.” –Saunders

DCC staff have talked with the mobile traders who use that space during the day and the trial will not affect their use of the area. Mr Saunders says at the end of the trial, staff will discuss the results with taxi companies, the Police and local businesses before deciding whether to make it a permanent move.

Mon, 2 May 2016
ODT: Stabbing: ‘What is this place coming to?’
The stabbing of a 21-year-old man in central Dunedin early yesterday has left the man who rushed to his aid questioning the state of his city. Detective Sergeant Chris Henderson said the victim was taken to Dunedin Hospital after being stabbed in the neck and back outside the The Bottle-O store on the corner of Princes St and Moray Pl about 3.30am.

DUNEDIN IS UP THERE (2015 statistics)

### newshub.co.nz Mon, 2 May 2016 at 4:45 p.m.
NZ’s most violent city spots revealed
By Lisa Owen
A Newshub investigation has revealed Auckland neighbourhoods dominate a leaderboard of the most violent city hot spots in the country. Statistics New Zealand has mapped 2015 police crime data, released to Newshub under the Official Information Act, to show the areas with the highest number of assaults, sexual assaults and robberies in public places. The crimes include anything from rape to being beaten up or being robbed of your cellphone at knife-point. Three of the five most violent city areas (precincts where there are more than 3000 residents) are in Auckland’s CBD. […] *By overlaying population data in the zones where crime has occurred, Statistics NZ has been able to work out the national average for incidents of public place violence. *Article uses 2015 statistics of victimisations by assault, sexual assault and robbery in public places.
Read more + VIDEO

█ Dunedin = No. 7 on New Zealand’s top ten most violent city hot spots
The only South Island hotspot, the area running north from the Octagon.

█ For more, enter the term *octagon* in the search box at right.

Council reaps us what it sows

This tied to recent years of lobbying by the Octagon bar owners on licensing and trading hours and conditions, sometimes tied to hosting after-match wakes for Stadium sport and events (even although major events at the stadium are tapering, as predicted), unsupported youth, gang sqirmishes, under-resourced local police, and society’s access to cut-price alcohol and its liberal use (pre-loading and regular binging) alongside other substance abuse, means the Octagon is devolving into a hell-hole of collective making – not dissimilar to what happened at Cathedral Square in Christchurch before the quakes.

What will the city council do to mitigate the situation, and how soon can we restore the space to 24/7 safety for all? Is this even possible with the cluster of ‘intemperance’ bars and no push for building owners to move to greater diversity in mixed ground floor tenanting on the lower Octagon? One way or another “Party Central” has to fold – changing the pattern of ground tiles will not suffice.

Dunedin Mayor Dave Cull speaks volumes when he says, at times, he does not feel comfortable near the Octagon.

ODT Editorial: Personal responsibility key (30.4.14)
Knowing Dunedin is one of the most statistically safest cities in New Zealand will bring no solace to the families involved in the tragic death of Ryan Court at the weekend. Read more