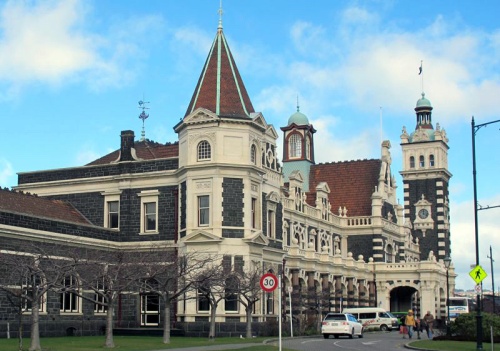 There’s a new tenancy at the Dunedin Railway Station.

People working on the project had been told the whole underfloor area was safe to enter; that there was plastic down.

Turns out the plastic cover ran short, and a number of site workers had crawled across bare dirt, kicking up a lot of dust as they went – it was found the area had been contaminated with asbestos.

We understand workmen from several companies have been affected.

The Dunedin Railway Station is a council owned property. Affected sitemen have since had their names added to the WorkSafe Asbestos Exposure Database; and Health and Safety meetings have been called to review safety drills and gear provision.

It appears a few people have slipped up along the ‘food chain’ of managerial responsibility for the workers, starting with DCC management (the building owner).

We hear DCC is now paying for workers to be educated on what protection gear they must wear on exposed asbestos worksites. 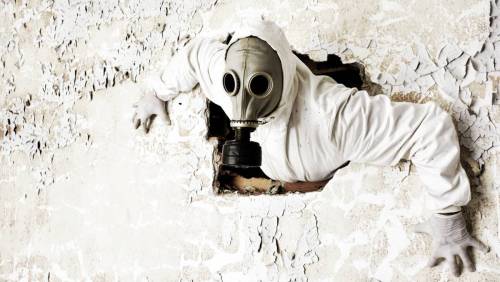 Dob in an asbestos dumper [illawarramercury.com.au]

New Zealand’s asbestos death toll will climb to about 5100, excluding deaths from asbestosis, which were difficult to determine, a WorkSafe spokesman said. It was expected the peak of asbestos-related disease would not be reached until sometime between 2030 and 2040, the spokesman said. (ODT)

Is the Dunedin City Council opening its eyes quickly enough even with the Amalgamated Workers’ Union (AWUNZ) on its tail ? Good council workmen dead and memorialised in photographs, frightening….

“They worked regularly with the city’s asbestos water pipes – cutting and grinding, kicking up asbestos dust and sweeping up the mess later.” (ODT)

█ HOW MANY Dunedin City Council (DCC) staff, work crews, contractors and subcontractors have been required to work with asbestos product and exposure to fibres over the years —without comprehensive safety training and correctly specified respirators and safety clothing for individual protection ?
The answer is likely to be unlimited numbers.
Has anything changed at DCC ?
Have all asbestos contaminated DCC-owned sites and work areas been identified to date ?
Are formal protocols and a register in place for personnel who believe they may have been exposed to asbestos and require admittance to a testing regime ?

### ODT Online Sat, 18 Jun 2016
Asbestos toll will grow
By Chris Morris
The death toll from asbestos-related disease in New Zealand will continue to climb for decades to come, despite a ban on imports of building materials containing the toxic mineral. Environment Minister Nick Smith on Wednesday announced New Zealand would join more than 50 other countries in banning the importation of asbestos-containing materials (ACMs), beginning on October 1, unless exemptions were granted. The move was designed to further reduce the “appalling” death toll caused by asbestos, used in building products for more half a century. It now claimed an estimated 170 lives a year, he said.
Read more

11.5.16 ODT: Asbestos likely to be cost in future
Asbestos may impact the financial health of the Dunedin City Council’s coffers in years to come but the extent of the cost remains unknown, councillors heard at yesterday’s annual plan deliberations. Group chief financial officer Grant McKenzie told councillors work was under way at present to establish the extent of asbestos use and issues in council-owned assets, but the cost to rectify it would not be known until the investigation was complete.

4.5.16 ODT: Removing asbestos pipes
The Dunedin City Council says it will remove decaying asbestos pipes from public land after their existence at Sullivans Dam was noted by the Amalgamated Workers Union. The pipes are beside sheds near the entrance to the popular fishing spot in Leith Valley Rd. The council yesterday said it had not known the pipes were there.

21.4.16 ODT: Asbestos at pool no threat to public
The Dunedin City Council says there is no immediate threat to the public following the discovery of asbestos at Moana Pool. During a maintenance check of the building early last week, asbestos was discovered in the pump storage area under the pool level of the building and in restricted storage areas away from the pool.

20.4.16 ODT: No ‘immediate health risk’ from Moana Pool asbestos
Group Manager Parks and Recreation Richard Saunders said the maintenance checks identified further inspection and testing for asbestos was needed at several sites, of which Moana Pool was one. […] Initial inspections have been carried out at two other buildings – the Sims building in Port Chalmers, which is leased to a club, and a storage shed located next to Tahuna Park used by Parks and Recreation staff and contractors.

16.4.16 ODT: Council denies asbestos danger
A union says the public could easily have been exposed to cut and broken asbestos pipes left unsecured in a sometimes unattended Mosgiel yard. The Amalgamated Workers Union (AWU) said the pipes at the Dunedin City Council’s Mosgiel wastewater treatment plant were not in a safe state and could have been accessed by children in the residential street.

ASBESTOS (pronounced /æsˈbɛstəs/, /æzˈbɛstəs/ or /æzˈbɛstɒs/) is a set of six naturally occurring silicate minerals, which all have in common their eponymous asbestiform habit: long (roughly 1:20 aspect ratio), thin fibrous crystals, with each visible fiber composed of millions of microscopic “fibrils” that can be released by abrasion and other processes. They are commonly known by their colors, as blue asbestos, brown asbestos, white asbestos, and green asbestos.

Asbestos mining existed more than 4,000 years ago, but large-scale mining began at the end of the 19th century, when manufacturers and builders began using asbestos for its desirable physical properties: sound absorption, average tensile strength, resistance to fire, heat, electricity, and affordability. It was used in such applications as electrical insulation for hotplate wiring and in building insulation. When asbestos is used for its resistance to fire or heat, the fibres are often mixed with cement or woven into fabric or mats. These desirable properties made asbestos very widely used. Asbestos use continued to grow through most of the 20th century until public knowledge (acting through courts and legislatures) of the health hazards of asbestos dust outlawed asbestos in mainstream construction and fireproofing in most countries.

Prolonged inhalation of asbestos fibres can cause serious and fatal illnesses including lung cancer, mesothelioma, and asbestosis (a type of pneumoconiosis). Illness from asbestos exposure can be found in records dating back to Roman times. Concern in modern times began in the 20th century and escalated during the 1920s and 1930s. By the 1980s and 1990s asbestos trade and use was heavily restricted, phased out, or banned outright in an increasing number of countries.

The severity of asbestos-related diseases, the material’s extremely widespread use in many areas of life, its continuing long-term use after harmful health effects were known or suspected, and the slow emergence of symptoms decades after exposure ceased made asbestos litigation the longest, most expensive mass tort in U.S. history and a much lesser legal issue in most other countries involved. Asbestos-related liability also remains an ongoing concern for many manufacturers, insurers and reinsurers.
Read more at Wikipedia: Asbestos

Myth: Asbestos-cement pipes present no health or environmental hazard.
● Fact: Health and environmental hazards start during the manufacturing process when the ends of the pipes are ground and the waste is disposed of carelessly. Fine dust produced during installation of the pipes is a hazard to the workers and community. When the pipes are dug up and removed, fibres are released as they are broken and crushed. Pressure pipe for water distribution was made with crocidolite and amosite as well as chrysotile.

Myth: Paint and encapsulants offer permanent protection against asbestos fibre release.
● Fact: Paint and encapsulants deteriorate and take asbestos fibres with them when they peel off. Why is it necessary to protect a material that is touted for its weather-resistance and durability, yet encapsulants for asbestos-cement roofing and siding are widely marketed. Encapsulants are a form of paint, and a good paint job begins with surface preparation. The hope is that no one sands asbestos-cement roofing and siding before they paint or encapsulate it, because of the obvious dust and health hazard created.

The Health and Safety at Work (Asbestos) Regulations 2016 came into force on 4 April 2016. They set out the new rules around the removal of asbestos, and the circumstances where WorkSafe must be notified.

Type of licence : What asbestos can be removed?

Asbestos-cement roofing before and after cleaning [specialistroofcleaning.com]