Tag Archives: Heads in the sand

Rather, Daaave promotes the SHONKY programmed spend on non-essential CBD tart-ups. Not reprioritising council budgets then, Daaave….. to solve the Superduper-Mystery of council-owned Aurora/Delta LOST OR MISPLACED FUNDS, WHERE DID THEY GO ? WHERE WERE THEY SPENT ? Hundreds of millions of dollars lost from Otago ratepayers and electricity users, Daaave…..
You are going to make them pay again. 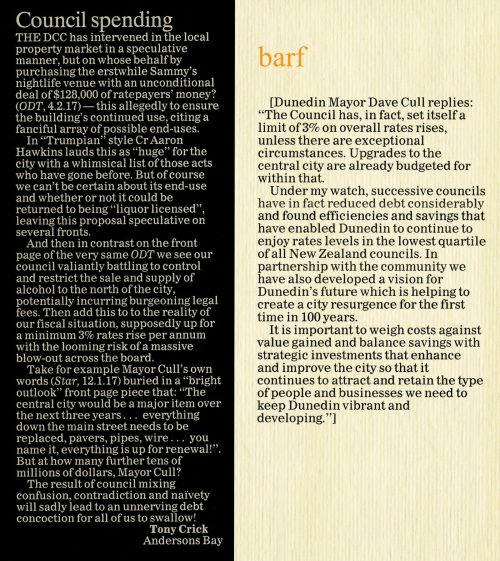 Otago Manufacturers need a Safe and Secure supply of Electricity.
The Mayor of Dunedin is making sure this won’t happen.

No news : Appointment of Group CFO

How interesting then that DCC has – as yet – failed to appoint a new Group Chief Financial Officer following the resignation of Grant McKenzie last year (see announcement 11 June 2016 via ODT).

Fri, 12 Aug 2016
ODT: Departure reshuffle
The departure of the Dunedin City Council’s group chief financial officer, Grant McKenzie, has triggered a minor reshuffle within the organisation. The rejig includes a temporary structure while Mr McKenzie’s replacement is recruited, but the council has also taken the opportunity to realign job titles and responsibilities for two of the council’s senior managers. […] Council financial controller Gavin Logie has also been named acting chief financial officer until Mr McKenzie’s replacement is named.

Dunedin City Council – Media Release
DCC Appoints Treasury Manager
This item was published on 10 Sep 2014
Richard Davey has been appointed to the new position of Dunedin City Council Treasury Manager. Mr Davey, who is originally from Dunedin, has had more than 21 years of banking experience in New Zealand and Australia. His experience centres on dealing with corporate treasuries and solving their risk management and funding issues. As Treasury Manager, Mr Davey will oversee Dunedin City Treasury Ltd – a DCC-owned company provides funding and financial services to other companies in the Dunedin City Holdings Ltd group. Mr Davey will report to Group Chief Financial Officer Grant McKenzie. Read more

It seems DCC has slumped and trailed until 27 February (20 working days) to respond formally to my request for official information – with no phone call received (see postscript).

Tomorrow Monday is D-Day. No notice of extension has been received.

HOW HARD IS IT REALLY TO ANSWER BASIC QUESTIONS—
20 working days ? Get real DCC.

I am writing to acknowledge receipt of your official information request dated 27-January-2017 for information regarding the APPOINTMENT OF GROUP CHIEF FINANCIAL OFFICER as follows:

1. When will the DCC appoint a Group Chief Financial Officer (GCFO) to replace Grant McKenzie ? 2. For what reason(s) has this appointment been delayed ? 3. Have applicants for the position been short-listed ? 4. Is there anything thing else DCC wants to say about the appointment process ?

P.S. I have also sent your questions to our chief executive Sue Bidrose, as she may wish to provide an answer to you directly by phone or email.