Saturday’s ODT had an interesting article about delays on the troubled University of Otago landscaping project. This article is the canary in the University construction goldmine, as there are other even much larger disputes brewing on current University projects that certainly will become a goldmine for the contractors, to the detriment of the University’s financial health.

Mr Mackay said the complications on the landscaping included “replacing old water, sewage and drainage pipes”. What he did not say is that this work was meant to have been done two summers ago, BEFORE the academic year, but due to the project management, it was not. However, this landscaping project is small beer, there are much bigger problems looming.

The University, in their biggest ever project, at the 11th hour, on the “advice” of a contractor, Fletcher Construction, who we understand did not even finally submit a bid, told the University they could save a few hundred thousand on the $100 million project by deleting the need for a cost control schedule…. that would have severely limited what the contractors could charge for changes and extra work. In a monumental display of incompetence, the University stopped production of the schedule – which was already underway and had to be part paid for anyway and put the drawings and specifications out to tender without a schedule. If the drawings were 100% complete and the University wasn’t to change its mind that would be OK, but the Pope is more likely to preach at Canterbury Cathedral than this happening. Of course, the drawings are woefully incomplete, and the arguments and changes have started. Watch out for Someone from the University Property Services division, in about a year, to be in full dissembling mode about the delays, and how, “even though it’s six months late, it’s still on budget”. If that is the case, the budget has massive doses of incompetency cover built into it !

An additional problem that’s about to come home to roost in the University and Otago Polytechnic’s coffers is insistence, by University Property Services, on the use of “Early Contractor Involvement” (ECI). (Someone at University Property Services has never met a new construction euphemism he did not use or a project delay that he could not justify). Both the University and Polytech on recent large projects have engaged in tender processes where there is no fixed sum, because the documents are far from complete, and the current fashion du jour is to have “early contractor involvement” where the builders are paid to be involved in the design phase, to provide “constructability” expertise. Basically the builders make a submission to say what nice people they are, and advise percentage site overhead and profit margins they would build the project for. The rest of the cost, about 85-90%, is just guesswork. (“Provisional Sums”). This process allows the “tender evaluation team” (mainly the Architect and the University) to choose who they want, without regard to price, because the weighting for “non-price attributes” is a lot more than 50% of the total weighting.

On both the University commerce building project, just started by Naylor Love, and the Polytechnic Hostel project (also won by Naylor Love), this was the process. Both projects are around $20 million all up. Significantly, the architect on both projects was Mason & Wales. There were a number of other consultants in the design teams. The politest way to put the next point is that there appeared to be “confusion” about the proposed early contractor involvement process from the team. It was thought, inexplicably, that this wonderful new system of selecting builders without worrying about price meant not only did they get to choose ones with very high margins who wouldn’t cause problems when the inevitable design problems arose, some consultants also thought that they could charge full fees and offload all of the detailing onto the builder…. which of course did not happen. Builders, in the South Island anyway, do not employ armies of CAD operators who can document bespoke large projects. That is what designers are for…. In both cases, the successful Naylor Love bid was hundreds of thousands of dollars more expensive than lower bids. Also in the case of both bids, the University and the Polytech paid a premium of around $500-600,000 to have the “ECI/ constructability” experience of Naylor Love…. only to find that the advice received was NOT what was expected…. the Polytech project has been now costed by Naylor Love and is $1.5-2.0 million over budget, and the “expert” constructability / ECI advice that the Polytech effectively paid $600,000 for is…. wait for it…. to make the building smaller. Hmmm, expensive and brief advice! Best not tell the Humanities students ! The other unsuccessful contractors may well feel aggrieved about how this process played out, as before they were even allowed to provide a proposal they had to prove their capability and experience to do the work, so in theory all tenderers were equally capable, and there was no logical reason for the favouritism to Naylor Love…. but were there other reasons ? There appears no meaningful financial oversight, the project teams seem a law unto themselves, and the suspicion is that both institutions’ funds are being spent in a very free and easy fashion.

From early April, university staff will start to see works underway as part of a landscaping project to give the grounds of the Dunedin campus a major facelift. But the benefits are promising to be very much worthwhile for both staff and students alike, with new paving, outdoor seats, trees, LED lighting, signage and improved shelter within a large area located between the northern end of the Richardson Building, and the intersection of Castle and Dundas Streets.

Vice-Chancellor Professor Harlene Hayne says the intention is to vastly improve access to known sunny, sheltered sitting areas for staff, students and visitors; to replace paving that has come to the end of its life with safer materials; and to create new outdoor sitting, walking and recreational areas to improve the visual linking between spaces on the campus.

The overall project is to include the replacement of old drainage with new drains in parts of the central campus, on behalf of the Dunedin City Council. Also, major works completed last year when the West bank of the Leith outside the Clocktower was lowered for flood protection purposes had resulted in a substantial visual change requiring further improvements.

Professor Hayne believes the enhancements are necessary and important, and they will further benefit what is already a stunning campus environment.

“We want to both maintain and enhance our well-known advantage as one of the world’s most beautiful campuses in which to work and study.”

“We want to both maintain and enhance our well-known advantage as one of the world’s most beautiful campuses in which to work and study. This is an exciting and innovative project that further capitalises on the potential here for greater outdoor utilisation of our beautiful, green areas, and spaces such as the north end of the Richardson building, where people have traditionally liked to sit because it is so sheltered and sunny. We will be using quality materials, timbers, and real blue-stone that blends in with our heritage buildings. We want this development to stand the test of time.”

Professor Hayne is mindful that this is a major task, and that there will be disruption to staff and students as work progresses. Information signs will be erected, and work will progress with as few interruptions and as little noise as possible. The University aims to have the project completed by the end of January 2016. Staff and students will receive regular updates as work patterns change via the Bulletin Board.

Highlights of the landscaping project include:

• The creation of an enclosed courtyard allowing for a more well-defined and better sheltered seating area outside St David café, with low bluestone walls.

• A new paved ‘town square’ outside the Staff Club in the area known as the Castle Walk. This will involve the relocation of some memorial trees, and the removal of others that arborists have said have come to the end of their natural life. An artwork (to be commissioned) will feature in the middle of this new square, as well as seating.

• Castle Street in the section housing Selwyn and the new University Childcare Centre, Te Pā, will be re-paved, with wider footpaths, and bike racks. The area will become more bike-friendly, with adjustments to parking spaces, and more trees. The street will be raised to be level with the footpath, with more trees added.

• The newly created concrete steps on the new embankment leading down to the Leith Stream opposite the Clocktower will have railings, and improved safety adjustments, while matured specimen trees will be added to increase shade and improve visual values.

• The tiled walkway over the Union St bridge will be re-paved in high-quality durable pavers, and there will be seismic strengthening underneath the bridge.

• Further extensive new landscaping with trees, seating and paving, as well as wider walkways and steps, will be installed in the area that runs east of the Union Street bridge, up past the Archway Lecture theatres, and around to the front of Allen Hall where Theatre Studies is housed.

• A community garden with fruit trees will be cultivated between the villas at the University end of Castle Street; and also rain gardens planted with native grasses added throughout the newly-developed area.

• In total, there will be about 15,000 square metres of paving replaced or re-laid.

• No changes are planned for the grass bank and historic mature trees directly in front of the Clocktower.

28.3.15 ODT: $8 million facelift for university
Next month, the University of Otago will embark on a 21-month multimillion-dollar landscaping project to transform Dunedin’s campus. 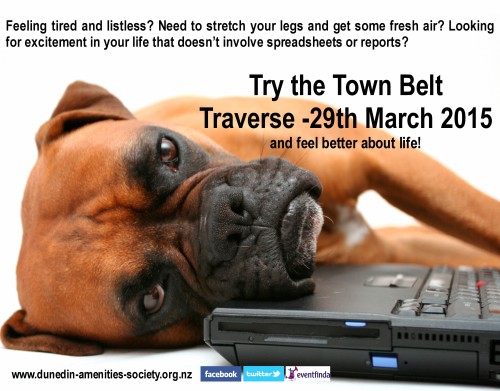 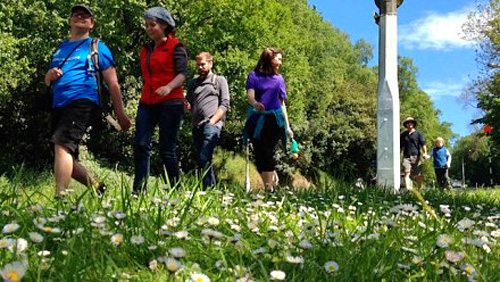 Walkers in the sun

It’s time to get your walking shoes on again and explore one of Dunedin’s great natural and historical landscapes.

The Town Belt Traverse is an 8.2 kilometre walk from the Southern Cemetery to Woodhaugh Gardens taking in the heart of the Dunedin Town Belt on Sunday, 29 March. The great thing about it is it’s absolutely free!

The route is a pram friendly event for people of all ages, stopping off at five points along the way. The Participants will receive a map and ticket at the car-park inside the Southern Cemetery.

The traverse starts between 10:00am – 10.30am and all participants must complete the traverse by 1:30pm. Collect a stamp at all five marshal points and you can be eligible for some great local prizes. The route is marked and there will be marshals at road crossing points along the way.

Today the Town Belt is an important recreational and ecological asset for the city and provides invaluable habitat for kereru, bellbird, tomtit, tui, rifleman, morepork, and shining cuckoo. The vegetation is an eclectic mix of exotics that dominates the southern area of the ‘belt to the more kanuka and fuchsia dominated ridges and gullies of the northern areas. At Woodhaugh an old stand of kahikatea remains as a reminder of a significant wetland forest that once stood there.

For the Dunedin Amenities Society the protection and enhancement of the Town Belt was the beginning of its foundation in 1888. The Society was founded through the energy of Thomas Brown and Alexander Bathgate to protect, enhance and promote Dunedin’s landscape and biodiversity. The Town Belt Traverse is your opportunity to explore through a self-guided walk one of New Zealand’s great reserve sites.