“However, I can certainly confirm that it is not the practice of staff to pre-empt any decision-making by the council.” –Ruth Stokes, General Manager Infrastructure and Networks

### ODT Online Wed, 11 Feb 2015
Apology over council staff gaffe
By Vaughan Elder
A Dunedin City Council senior manager has apologised to councillors over a staff member appearing to pre-empt a council decision on cycleway funding. Concern over the actions of staff came up at yesterday’s infrastructure services committee, where councillors voted on the allocation of $570,000 in new Government money to spend on the South Dunedin cycle network. […] In the council press release, senior transportation planner Kylie Huard said the Government funding “will be used” to enhance and expand the South Dunedin cycle network, including providing a link between Shore St and Victoria Rd, via Tainui and Cavell Sts.
Read more

ODT (11.2.15) Board to pay for road closures
In the article Mick Reece is described as the “council parks, recreation and aquatic services group manager”. Group Manager.

█ Isn’t it time the Dunedin public received an up-to-date Dunedin City Council organisation chart showing reporting lines. To know exactly where those 40+ managers / team leaders (of a total council staff of about 700) are situated, at considerable cost to the ratepayers.

Message to DCC chief executive Sue Bidrose: “Time for fine detail.” And, “Due diligence to Democratic principles, to be learned by Staff.”

[Subtext: it wasn’t simply a typo]

### ODT Online Sat, 19 Oct 2013
Cultural institution teamwork is the plan
By John Gibb
Otago Museum director Dr Ian Griffin is keen to join forces with other museums and cultural organisations in order to seek more Government funding for regional museums and similar institutions. He was invited to a private lunch attended by Prime Minister John Key during a visit to Dunedin last month and, with the help of National list MP Michael Woodhouse, Dr Griffin had the chance to briefly raise the funding topic.
Read more

### ODT Online Sat, 19 Oct 2013
Museum job applicants high quality director says
By John Gibb
Otago Museum director Dr Ian Griffin is pleased with the ”high quality” of applicants for the museum’s vacant commercial director role, during a time of ”significant change” at the institution. Museum officials said about 18 people had applied. Dr Griffin said a new commercial director would soon be appointed, but there could be a delay of a month or slightly more, depending on any notice period required at any previous job for the successful applicant.
Read more

Prime Minister John Key will take a pew in his Government’s $15 million seat at Dunedin’s stadium to watch a 2011 Rugby World Cup match. Key’s Government plans to make make full use of the $15m his Government gave Dunedin City Council for the city’s $198m roofed stadium. Today, after a tour of the stadium construction site, Key said he would watch a Rugby World Cup game from a seat at Dunedin’s stadium if it is finished on time.
Read more

John Key spotted at the new St Clair Beach Resort, and at the Allied Press building. Thanks Twitterfolk.

Failure to meet construction targets for the Forsyth Barr Stadium project could result in the Dunedin City Council being given just 20 working days to repay the $15 million Government grant for the project.
Read more

By David Loughrey and Dene Mackenzie

The Government confirmed yesterday the $15 million it plans to provide for the planned stadium in Dunedin will come with “no strings attached”. The promise came yesterday from Finance Minister Bill English during a visit to Dunedin, at the same time as Dunedin Mayor Peter Chin discussed the funding with Minister for the Rugby World Cup Murray McCully.

The recent meeting organised by Stop the Stadium at the Dunedin Town Hall, attended by 1800 people, raised as many questions as it answered. So, what is the council’s response?

Go to answers and other comments at ODT

The government will support Dunedin’s new stadium but it’s unclear what strings are attached. [our italics] Rugby World Cup Association Minister Gerry Brownlee has pledged a maximum of $15 million to underwrite the construction of the stadium. 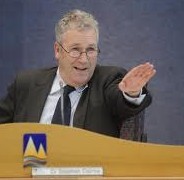 Mr Cairns, who is in favour of the stadium, would not tell the Otago Daily Times who the call was from or what was said, but he appeared positive.

Just over a fortnight ago, the council confirmed its $37.5 million contribution to the $198 million-dollar project. One of its conditions was that it receive an “assurance acceptable to council” that $15 million from the Government or other sources had been found to cover a shortfall in private-sector funding.
Read more