You could be forgiven for thinking Cull, Bidrose, the Finance Committee, and the majority of compliant councillors don’t have a vision for Dunedin’s future. That to believe that, not hearing bad news, smiling and riding a bike, will make the financial mire we are now in go away. That to continue to spend huge amounts on yet more foolish projects will somehow fix things. That to embrace a culture of no accountability will magically preclude the idiots who have cocked up so many DCC things in the recent past, doing EXACTLY the same thing again.

Just look at how many of the idiots who have foisted this debt and the numerous foolish failed projects are still on council. These people do have a vision, and here it is!

Hopefully the cycle trail will lead there.

An opinion piece from 28.9.12, written by Calvin Oaten, continues to have currency.

The End of The Golden Weather?
Are we coming to the end of the ‘Golden Weather’? I say this, not in the meteorological sense, but rather in the sense that perhaps our society and its economic construct might be on the verge of a catastrophic change. Why? Well it seems that many signposts are pointing to an approaching collapse of the present model of the economy as constructed. This requires constant growth in order to sustain an ever increasing social budget.
Read more

MESSAGE TO MEDIA WATCHING THIS BLOGSITE

Malcolm Farry has been misinforming media about the CST being subject to the Local Government Official Information and Meetings Act (LGOIMA).
Farry is incorrect when he states that the Carisbrook Stadium Charitable Trust (CST) is not subject to LGOIMA.
Attached are two legal opinions which both state that the CST is subject to the provisions of LGOIMA.
These were released to me by Paul Orders, former CEO of the Dunedin City Council (DCC), after I made a complaint to the Ombudsman.

When I produced Harland’s email to the Ombudsman, the Ombudsman recommended that the Council release these opinions to me. Hence the attached legal opinions. It is not often that legal opinions are released because of legal priviledge but I guess in this case I had proved I was misled. It was part of the deceipt of withholding vital information from the public so that they could push the project through against the will of the community.

They lied from start to finish with this project and filled their pockets along the way –that’s why myself and others will continue to expose what happened. The whole process was so bloody cynical.

Returning to Farry, CST and LGOIMA, it is also clear under the Public Records Act 2005 that the Council is required to maintain full records etc as outlined below:

(1) Every public office and local authority must create and maintain full and accurate records of its affairs, in accordance with normal, prudent business practice, including the records of any matter that is contracted out to an independent contractor.

(2) Every public office must maintain in an accessible form, so as to be able to be used for subsequent reference, all public records that are in its control, until their disposal is authorised by or under this Act or required by or under another Act.

(3) Every local authority must maintain in an accessible form, so as to be able to be used for subsequent reference, all protected records that are in its control, until their disposal is authorised by or under this Act.

Please find attached the information regarding the LGOIMA peer reviews. 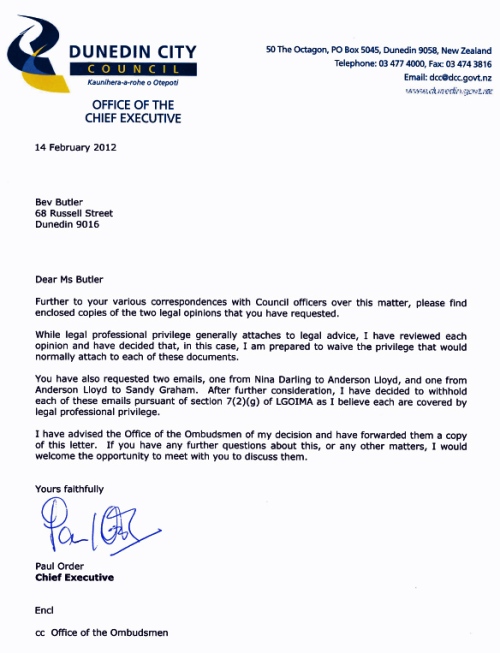 ### ch9.co.nz August 8, 2013 – 6:58pm
Slice of history comes to light
A slice of Dunedin’s past came to surface today outside the city’s historic railway station.
Video 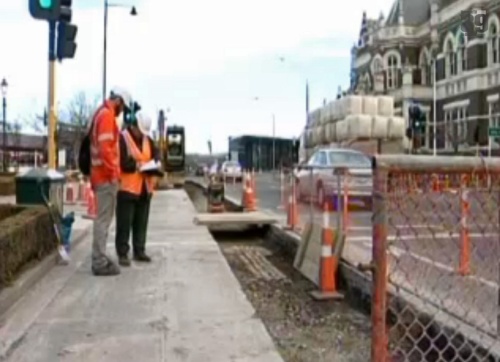