The father of one of the men killed in the Pike River mining disaster says the families have always believed the Government wasn’t telling the truth about mine safety.

Mon, 1 May 2017
ODT: Pike video shows men in mine after blast
The Government has long said high concentrations of methane inside the mine make it too risky to re-enter to retrieve the bodies of the 29 men killed in the November 2010 blast, because the gas could explode. But footage leaked to Newshub yesterday showed two Mines Rescue workers inside the mine three months after the explosion, with no gloves, apparently relaxed as they fashioned a makeshift cover for a robot out of cardboard and tape. The robot is seen to be steaming or smoking well inside the mine, but the workers do not panic – and nothing explodes. Bernie Monk, whose son Michael was killed in the November 2010 explosion in the West Coast coal mine, said the newly leaked footage did not come as a surprise. Cont/

Never-before-seen footage from a robot inside Pike River shows men working, smoke or steam emitting from the robot https://t.co/4ST8LcktZc pic.twitter.com/cjo5rLWgxo

This is the loader Russell Smith was driving when Pike River exploded. He was 1570m up mine's access tunnel https://t.co/7VUmbPGsXq pic.twitter.com/V7wIvAWHVe

.@pmbillenglish says he didn't know about the existence of Pike River footage released by Newshub https://t.co/zQnuN02Szd

nzherald.co.nz Uploaded on Nov 23, 2010
Raw video: Robot camera inside Pike River mine
First pictures from inside the Pike River mine which show the miner’s helmet and mine damage.

Graeme Axford Published on Oct 31, 2014
Pike River families believe photos show bodies
Friday 31 Oct 2014 8:06 p.m.
It is understood that a decision from Solid Energy on whether it will allow recovery teams to re-enter the drift of the Pike River mine is imminent. The drift is not the mine itself, but the two-kilometre tunnel that leads to the mine.
Families of the victims are desperate for a mission to collect evidence and to see if there are any bodies in the drift.
They say if Solid Energy won’t do it, they will. They say they know there are bodies in the mine, and tonight, with their blessing and for the first time, we can show you their evidence. Dean Dunbar, the father of lost miner Joseph Dunbar, spoke with Campbell Live producer Kate McCallum. Watch the full interview with Dean Dunbar.

davedobbynmusic Published on Dec 15, 2014
Dave Dobbyn – This Love (Live Perfomance)
‘This Love’ by Dave Dobbyn with the Orpheus Choir of Wellington is a moving tribute to the 29 men who died in the Pike River Mine explosion.
The piece was first performed at a concert attended by members of the miners’ bereaved families and was recorded by Radio NZ Concert. The choral arrangement is by Mark Dorrell. Also performing are Wellington Young Voices, Mark Vanilau (piano), Jo Barus (bass), Ross Burge (drums) and Chris Clark (cornet). With special thanks to TVNZ and Satellite Media – taken from the TVNZ documentary ‘Dreams Lie Deeper’.

NZ journalism, Ean Higgins got it in one #knowwhatwethinkofGerry 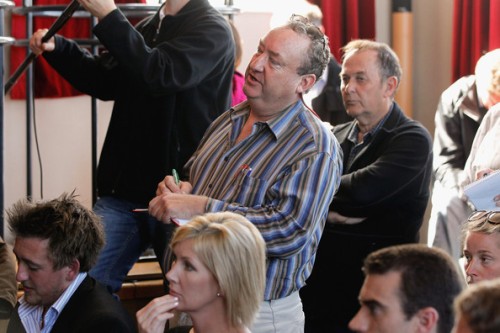 Journalist Ean Higgins of The Australian newspaper asks a question during a media briefing [zimbio.com]

### stuff.co.nz Last updated 07:47 27/07/2014
Brownlee lashes ‘tosspot’ journalist
By Steve Kilgallon and Neil Reid
The Australian journalist who fled New Zealand after being labelled a “boorish tosspot” by National minister Gerry Brownlee for his insensitive approach to the Pike River mine disaster has declared it the finest moment of his career. Brownlee, however, has told the Sunday Star-Times that Ean Higgins remained a tosser, but had also proven himself a fantasist and an “obnoxious twerp”.
[…] Higgins’ self-congratulatory essay about his brief Pike River coverage was certainly inflammatory.

He called New Zealand “a small, meek and mild democracy” and said: “The New Zealand journalists didn’t ask any uncomfortable questions, being happy to accept whatever the police, the company and the miners’ rescue people told them . . . the Australian journalists, coming from a more robust tradition . . . did ask the tough questions”.

He describes the two groups of journalists dining separately in “the only good restaurant” in Greymouth and the Aussies deciding “we were really going to get stuck into the company and the authorities and show the Kiwis real journalism and workshopped a few really brutal questions”.
Read more

For anyone needing help, advice or mediation on employment and work-related matters anywhere in New Zealand . . .

Contact the Ministry of Business, Innovation and Employment (MoBIE) – formerly the Department of Labour.
█ http://www.dol.govt.nz/er/solvingproblems/resolving/mediation.asp

More information on mediation and how to access the service is available at http://www.dol.govt.nz/er/services/mediators/index.asp
or contact the centre on Freephone 0800 20 90 20

You can also contact your union representative, a lawyer or your local Community Law Centre for advice.

█ Don’t hesitate to call Police on 111 if you feel threatened.

We note the following news items with some distress and revulsion.

### ODT Online Wed, 1 May 2013
Queenstown driver paid $63,000 after sexual harrassment
By Abby Gillies
A female truck driver working in Queenstown has been awarded more than $63,000 for being sexually harassed, discriminated against because of her gender and unjustifiably dismissed from her job. A decision by the Employment Relations Authority has ordered Rachael Harrington receive $25,000 in compensation and $38,200 from her former employer Cromwell-based Thunderbird One, over her treatment.
The truck driver started work with the company in Queenstown, which operates a Mainfreight franchise, in September 2008. However, “her employment was both short and fraught”, and she resigned and filed a personal grievance three months later, said the ERA finding. Her claims of being unjustifiably disadvantaged, discriminated against and sexually harassed were unchallenged by the company, it said.
Read more

### ODT Online Thu, 2 May 2013
Sexually harrassed Queenstown driver miscarried
By James Beech
The former Queenstown female truck driver awarded more than $63,000 for being sexually harassed, discriminated against because of her gender and unjustifiably dismissed from her job suspects she miscarried as a result of being told to “manhandle” an 800kg load at work. The Employment Relations Authority ordered that Rachael Lee Harrington receive $38,243 as recompense for wages lost as a result of the dismissal and $25,000 as compensation for humiliation, loss of dignity and injury to feelings from her former employer, Cromwell-based Thunderbird One Ltd. Ms Harrington was “severely bleeding and miscarrying after lifting all the heavy pallets, so it was really super traumatic for her,” counsel Angeline Boniface, of Christchurch, told the Otago Daily Times yesterday. “The worst thing about this entire situation is that here she is bleeding profusely, her father asked for an ambulance to come on site and Mr [Justin] Marshall said, “If you get an ambulance, you’ll be up for disciplinary action,” Mrs Boniface said. “Meanwhile she’s bleeding, she wants to get into the building and other staff members have locked her out and [are] laughing at her. This is awful, just shocking.”
Read more

Spare a thought for all the Pike River victims and their families.

Maarten Quivooy was the National Safety Manager at Dept of Labour at the time of the Pike River tragedy and during the commission of enquiry that followed which resulted in DOL Management being heavily criticised. As we now know, Quivooy, like a rat off a sinking ship, left the DOL before the Commission made its findings public.

Quivooy grabbed the top Gambling Compliance job at DIA ahead of an incumbent. In light of this it would be interesting to read his CV, his references from DOL and hear his responses given to the DIA selection panel – “Maarten can you please outline your achievements with the DOL”

Quivooy is all hat and no cowboy!!!

Use the search box at right to find more items connected to professional rugby, pokie rorts, TTCF, ORFU and DCC.

### Sunday Star-Times Sun, 11 Nov 2012
Pokie man stopped from rort inquiries
By Steve Kilgallon
A senior Internal Affairs investigator says he was prevented from probing pokie rorts by his own department because it did not have the confidence to prosecute major crimes. Dave Bermingham, an investigator and analyst who left the department in August, said Internal Affairs was incompetent and should be stripped of its role investigating gaming machine fraud. {continues}
*No weblink available. Full text reproduced at post.

Tony Molloy QC had this to say about a Government Regulator after his enquiry into the collapse of the finance industry:

“The destruction of billions of dollars of ma and pa retail wealth, through finance company meltdowns was the inevitable consequences of at least three decades of unreadiness, unwillingness and inability of regulators, enforcers, courts, lawyers and accountants to fulfil their roles with integrity.”

The Commission of Enquiry into The Pike River Disaster had this to say about another Government Regulator, the Department of Labour:

“DOL’s compliance strategy did not require an assessment of Pike’s safety and operational information. The inspectors did not have a system, training or time to do so. When, at the hearings, they were shown examples of safety information obtained by the commission from Pike’s records, the inspectors were visibly dismayed. This was not a case of individual fault, but of departmental failure to resource, manage and adequately support a diminished mining inspectorate.

The gap between the high-level statements in those documents and the reality on the ground was remarkable.”

Maarten Quivooy was the NZ Safety Manager at the DOL over this period but left DOL to become DIA’s head of Gambling Compliance. When the Sunday Star-Times put the allegations of cover ups and closing down of investigations within the pokie industry which he now oversees he had this to say:

“They do their investigation work to the best of their ability and from their perspective it can seem like it goes into a black hole but it has had active and thorough scrutiny by senior management.”

His comments suggest that the “remarkable gap” between high level statements and reality is now opening up within DIA !!!

To comfort the public and Politicians, Quivooy is quick to claim their investigation into TTCF was reviewed by Office of the Auditor General. What he doesn’t tell the public is that in July 2009, over the same period that Bermingham and DIA investigators were conducting their investigations into TTCF, Audit NZ was conducting its own independent and statutory audit of TTCF, as a public entity. That audit also found serious issues involving expenditure but neither Audit NZ or its parent body (OAG) took action or followed up on the findings at the time. DIA and OAG only bounced into life when I appeared as a “whistleblower” in October 2010.

OAG have never given me a satisfactory explanation as to why they didn’t immediately act or follow up to protect millions of dollars of public money but their own failure to act might explain why OAG have been so willing to endorse the DIA investigation that I have labelled a whitewash and Bermingham recently describes as a cover up.

A case of two well- resourced government regulators sticking together to avoid embarrassment.

Health and safety laws require control of a workplace

Department of Labour officials are less than thrilled with Dunedin Mayor Peter Chin’s handling of a mechanical excavator.
Read more

I am utterly surprised that the carry-on by two inexperienced elderly men with a substantial piece of machinery would go unnoticed by OSH and those at Hall Bros responsible for the company’s health and safety policies. What were they thinking??

Just when we all thought it was safe to hold our heads up in public again. We had more favourable publicity when students burnt couches in the streets. On the positive side, I can’t wait for what will happen next. Pie throwing? One of those little bicycles? Someone phone Phil Sprey, quick.

I am glad this ridiculous event is not going unnoticed by the Department of Labour. It is, of course, Hall Bros rather than Mr Chin who should be censured. He was just acting foolishly, while Mr McEwan is ultimately responsible.
Read more