DON’T MOVE. DON’T ACCEPT THE MARKET RESERVE. KEEP THE PROTEST CENTRAL AND HIGHLY VISIBLE . . . WHILE DUNEDIN CITY COUNCILLORS CONTINUE TO SELL OUR FUTURE DOWN THE TUBES.

### ODT Online Fri, 21 Oct 2011
Occupy protesters offered other site
By David Loughrey
Protesters in the Octagon have been offered an alternative site at the Market Reserve in Dunedin, a move Mayor Dave Cull said was designed to return the Octagon to all city residents. Mr Cull last night said council chief executive Paul Orders had organised a staff member to pass on the message to the group yesterday afternoon. The protesters had been invited to the council today to speak to Mr Orders, and give their response.
Read more 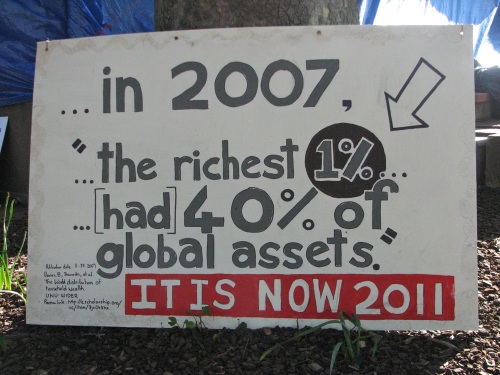 ### ODT Online Wed, 19 Oct 2011
Opinion
Campers strike a common chord
By Simon Cunliffe
Brrrrr! Not great weather for camping. It’ll soon be a bog up there in the Octagon – where the good folk of the “Occupy Dunedin” movement have parked their tents. Can’t imagine they’ll want to stay long in this sort of weather but one or two of them seem determined to remain. There’s been a bit of a squabble over statutes governing occupation of the site. It’s been said a 19th-century bylaw allowing immigrants en route to the Central Otago goldfields to squat temporarily in the city centre is still in force. A neat irony that: it’s a gold rush of a different kind this mob have set up shop to condemn. Their focus is corporate greed, social inequality, free-market economics and environmental issues, much of which they would undoubtedly argue arises from the unfettered accumulation of the aforementioned “gold”. And, interestingly, it’s an echo that has been witnessed in large-scale demonstrations across the world.
Read more

### ODT Online Wed, 19 Oct 2011
Spirit of protest not dampened by rain
By John Lewis
Anti-capitalism protesters are yet to decide how long they intend to stay in the Octagon, but the Dunedin City Council is going out of its way not to put pressure on the group to respond to its request for a timeline.
Read more

### ODT Online Wed, 19 Oct 2011
Opinion
Importance of sharing our common wealth forgotten
By Alison MacTavish
The Rugby World Cup has predictably given rise to plenty of discussions about whether rugby is our national religion, or about its importance to our national identity. Election proposals that run counter to the more fundamental values of being a New Zealander, however, have attracted far less discussion.