### ODT Online on Wed, 5 Aug 2015
Bringing ‘The Cook’ back to life
By Damian George
Patrons will be able to toast the reopening of Dunedin’s historic Captain Cook Tavern by Christmas, the project’s architect says. The venue, a popular jaunt for Dunedin’s student population, was founded in 1860 but closed in June last year. […] Architect Ed Elliott, of Queenstown company Elliott Architects Ltd, said a large emphasis of the refurbishment was placed on preserving the building’s character when design plans were drawn up.
Read more

█ The Cook Hotel is now at 70% seismic strengthening.

Otago Daily Times Published on Aug 4, 2015
Bringing ‘The Cook’ back to life
Patrons will be able to toast the reopening of Dunedin’s historic Captain Cook Tavern by Christmas, the project’s architect says.

Michael Brown established the hotel in 1864. The original “Cook”, a wooden structure, was pulled down in 1873 to make way for a brick and stone building which stands today. The replacement was designed by architect David Ross (1828-1908). 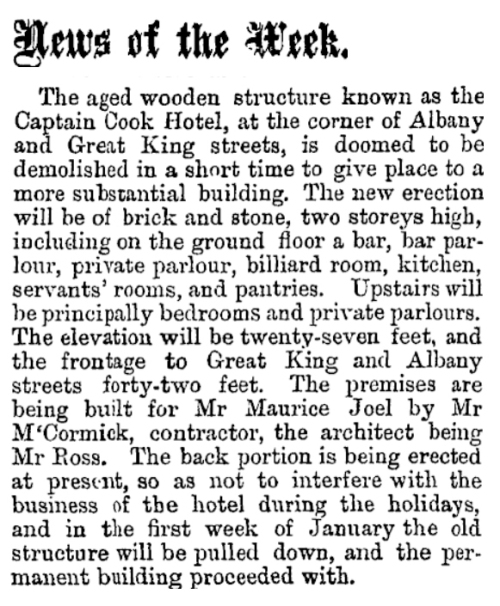 ### otago.ac.nz Otago Magazine Issue 40
Whatever happened to…
The Cook?
There would be few Otago alumni who don’t have some sort of story about The Cook.
Built in the 1870s, The Captain Cook Hotel (to use its full name) has been part of North Dunedin as long as the University of Otago itself, becoming woven into the backdrop of student life.
When word of its imminent closure started circulating in 2013 it is fair to say there was widespread dismay at the loss of what was seen as a Dunedin institution. On the day it closed its doors, in June 2013, people who had not set foot in the pub since they were students made sure they went in to toast The Cook and to share their stories and memories.
Since then the two-storey brick building has been wrapped in a scaffolding cocoon while a transformation takes place. The owners – Chris James, Noel Kennedy and Greg Paterson – are having the building taken back to its original look, right down to the old traditional corner entrance to the downstairs front bar.
Read more