Tinshed by Raffaello Rosselli
Amy Frearson | 21 June 2013 ● Dezeen
Australian architect Raffaello Rosselli has repurposed a corroding tin shed in Sydney to create a small office and studio apartment. Rather than replace the crumbling structure, Raffaello Rosselli chose to retain the rusty corrugated cladding of the two-storey building so that from the outside it looks mostly unchanged. The project embraces that it will continue to change with time through rust, decay and repair.

“The humble tin shed is an iconic Australian structure,” he explains. “As the only remaining shed in the area it is a unique reminder of the suburb’s industrial past.”

The architect began by taking the building apart and replacing its old skeleton with a modern timber frame. He then reattached the cladding over three facades, allowing room for three new windows. The frames of the windows are made from sheets of Corten steel that display the same orange tones as the retained facade.

“The materials have been left raw and honest, in the spirit of its industrial economy,” adds Rosselli. In contrast with the exterior, the inside of the building has a clean finish with white walls and plywood floors in both the ground-floor living space and the first-floor office.
Read more + Images

*Photography by Mark Syke, apart from where otherwise indicated.

Dezeen Published on Feb 13, 2017
Movie explores Jonathan Tuckey’s home in a 19th-century workshop 14 years on
Filmmaker Tapio Snellman has documented the ageing process of architect Jonathan Tuckey’s home, 14 years after he overhauled a 19th-century London workshop to create it. The architect, who is the founder of London-based firm Jonathan Tuckey Design, renovated and extended the steel fabricator’s workshop in 2002 to create a unique home for his family and their dog. He left the bare brick walls tarnished with black marks and chose “simple and everyday” materials to rejuvenate the character of the building, but also because they would weather well. Snellman, who shot Collage House in 2016, captures the ageing of these materials – including nicks and scratches on a series metal fixture and doors by splitting the screen into four – a trick he repeats throughout his film. “The split-screen sequences talk about the occupants and about the way architecture is integrated seamlessly with family life and personal expression,” Snellman told Dezeen. “The four simultaneous views create one strong spatial impression without any single image dominating the effect,” he told Dezeen. Both moving and fixed larch plywood panels clad the exterior, while beach plywood sheeting used as a floor lining inside the house, along with a concrete covering. Douglas fir stud work was planed and left exposed to partition spaces. This enables zones of activity to be defined, while also maintaining openness throughout.

Movie explores Jonathan Tuckey’s home in a former London steel workshop
Eleanor Gibson | 13 February 2017 ● Dezeen
This photography taken by James Brittain when the project completed in the early 2000s shows how Tuckey overhauled the industrial building by partially demolishing walls to create a central courtyard. “Plywood has weathered beautifully on both the interior and exterior and the scuff marks of 15 years use now tell the personal story of the family,” Tuckey told Dezeen. “The concrete floors have patinated and subsequently become more beautiful,” he continued. “The exposed brick was already there but continued to age gracefully as it was used to hang pictures and the kids used it to draw on it.” A space that forms a central part of Snellman’s film is the open-plan kitchen-cum-dining room, which occupies the former workshop. Here, he captures diagonal patterns of light that floods in through the long skylight between the original wooden bowstring beams restored by Tuckey. Snellman contrasts colour footage with black and white in the film, as well as tracking members of the family through the house. “The very controlled track shots try to eliminate the viewers awareness of the presence of the camera, as if the space would be seen at its most intimate, when no-one is present,” the filmmaker told Dezeen.

When renovating the building, Tuckey’s aim was to maintain as many of the building’s existing features as possible, while also creating plenty of playful spaces that catered to his then-young children. He divided the long and narrow building, which widens at the southern end, into three parts. He also demolished one of the existing buildings to create a courtyard and a small pond. The entrance hall and living area occupy the northern end with a mezzanine above, while the kitchen-cum-dining room occupies the central space. A walkway links these spaces to the two-storey structure added to the southern side, which houses the bedrooms and a bathroom. Since the original renovation, Tuckey has reconfigured the arrangement of the bedrooms, as his now teenage daughters needed more space. The children’s bedrooms have moved upstairs from the downstairs, while the single room used by the parents was divided into two interconnected rooms. A pair of hatches in the bedrooms open to the rooftop terrance, which was also only recently completed by the designer.
Read more 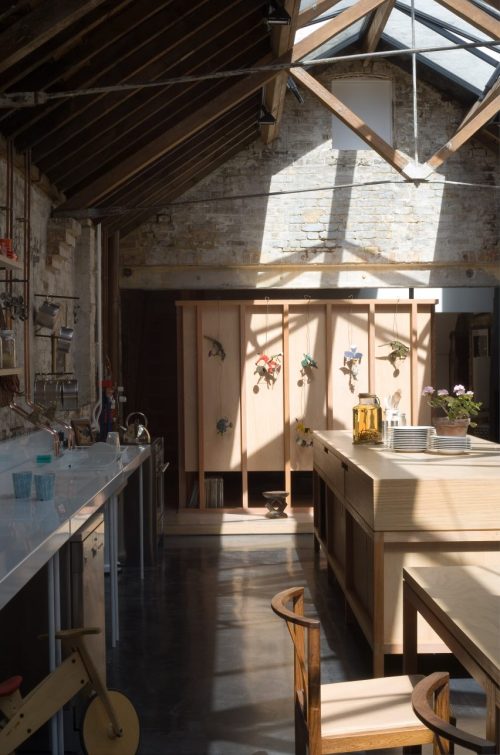