The inaugural Vogel Street Party was held last year in conjunction with the first ever Dunedin Street Art Festival; this year’s event will again be staged in the warehouse precinct and will collaborate with the Dunedin UNESCO City of Literature group for a party themed around Literature and Light.

LITERATURE To celebrate Dunedin’s creative city status as a UNESCO City of Literature Dunedin, New Zealand. You can find us sitting alongside only 10 other cities in the world that hold this status, including Edinburgh, Melbourne, Dublin, Prague & more.

LIGHT As 2015 is the International Year of Light, the VSP will be Dunedin’s major effort to join in the world-wide celebration of light and light based technologies.

The events, exhibitions and activities will follow these themes and showcase the talent and creativity we have hidden in our city. 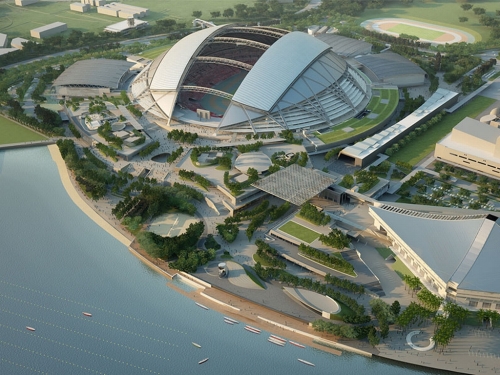 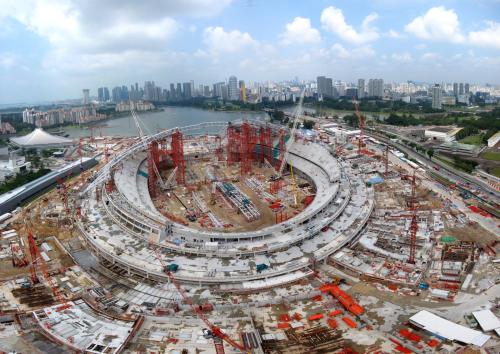 Singapore’s new National Stadium has the world’s largest single-span dome. And by leaving it open at one end, its designers have given the multi-purpose pitch one of the most beautiful backdrops in sport.

Since 1965, the building that has the largest single-span dome in the world has always been a sports stadium. This year the National Stadium of Singapore claims that title, with a diameter of 312m and a height of 80m. The stadium is at the heart of the new Singapore Sports Hub, a 35ha redevelopment of a former airfield that will serve professional sportspeople and the general public alike. The development comprises the national stadium, Kenzo Tange’s 1989 Singapore Indoor Stadium (SIS), two sports arenas, an aquatics centre, a watersports centre, 41,000sq m of retail and waterfront, a visitor centre, sports library, museum and a rail station.

With an investment of over 1 billion US dollars from the Singapore government and the client who will run the facility, the development is an Olympian achievement without the fuss of having to host a sporting mega-event.

The arena offers a remarkable number of configurations in the seating arrangements, as well as cooling and the ability to open and close the roof, all of which make it suitable for a number of occasions – be it a football tournament, cricket match or national parade. “We were given the most amazing site you could be given on the waterfront in Singapore and an ambitious and visionary brief from the client,” says Clive Lewis, an associate at Arup Associates who led the design of the stadium and worked on the construction with Aecom and local firm DP Architects.

The Sports Hub was proposed in 2000, when the old Kallang stadium was declared unfit for purpose. The competition for the complex was launched in 2006. “The government wanted to know what the right thing for Singapore was,” says Lewis. “Did it want to spread out its sports facilities? Or put them all in one location?”

It is the dome that anchors the Sports Hub to its site. It has a powerful presence, particularly looking towards the end that opens out to the city when each side of the ETFE roof is clasped shut. “The location next to Tange’s indoor stadium was a key decision,” Lewis says. “We were creating a landmark building, it had to have a presence from the city, but respect the Tange building. I think that the inverted peak of the SIS and the dome sit perfectly together.” Lewis and his team have certainly taken the stadium’s neighbour into account: both buildings draw from a material palette that includes concrete, aluminium and tiered greenery around the plinth. But where Tange’s building is solid and mute, a passive and imposing presence on the skyline, the new stadium is inviting – from the tiered canvas canopies that cover the concourse to the vast opening that frames the city and the massive LED lighting system across the surface of the dome that lights up the sweltering skies at night. Covering some 20,000sq m, it is the largest addressable LED screen in the world. “We never set out to design such a massive dome,” reflects Lewis. “Once we had made the decision to do so, a lot of things began to make sense. We could really make the project work.” 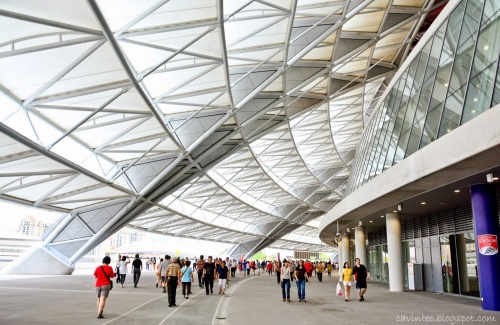 Inside the stadium, the structure that supports the external skin and the ETFE pillows that open and close to the heavens dominates. This structure is symmetrical and loops and crosses itself in a manner that conveys how the substantial loads are transferred to the two-storey plinth on which the stadium rests. “The delay in this project meant that we could refine the structure to make it as efficient as possible,” Lewis says. “We worked with about a 40 per cent penalty, so if you added ten kilos to the weight of the shell, you would have to increase the weight of the structure by 4 kilos. This led to the decision to use the pillows on the roof— not only would they filter the natural light, but they’re light and flexible, which helped optimise the structure of the trusses.” There are 20,000 steel members in the roof, and each truss that arks over the pitch tapers from 5m deep at its zenith to 2m at the point of contact with the plinth. “The opportunity with a dome this size is that it adds an intensity to the structure,” Lewis says. “It is a part of the event.”

The brief stipulated that the bowl within the stadium had to be movable and allow football, rugby and athletics to be played on the pitch. “We decided to add cricket into the mix,” Lewis says. “There are so many cricket-crazy nations within a four-hour flight we thought that it would provide an extra opportunity.” 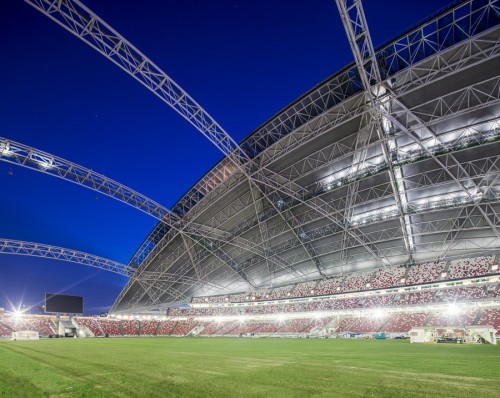 The Singapore Sports Hub is the next piece of the “plug in” approach to development in Singapore. Since the Jackson plan, conceived in 1822 when Stamford Raffles, the founder of Singapore, returned to the settlement and found himself displeased with the way the colony was developing, Singapore has tried to form a coherent urban strategy to manage growth. Currently the country has a population of just over 5 million, but wants grow to over 6 million. This 20 per cent swell will assure its economic position as the Switzerland of South-east Asia, but it is being managed to ensure the growth of other activities besides commerce. The development of Singapore has been more measured than, say, that of Dubai or Qatar; there is a quality to the developments that are being realised – including noticeably eye-catching contributions, such as Moshe Safdie’s Marina Bay Sands resort, OMA’s Interlace housing complex or Wilkinson Eyre’s park, Gardens by the Bay. The Singapore Sports Hub and the national stadium are an extension of this controlled, but still ostentatious, masterplan.

At the last Olympics, Singapore competed nine events, picking up two bronze medals for table tennis. The national football team is ranked 155th in the world, the rugby team 58th. So why build a state-of-the-art stadium in a country not known for its sporting prowess? The purpose, Lewis argues, is wider than that. “We have created the largest covered civic space in Singapore,” he says. The Sports Hub is intended to be a new piece of the city where the people can take part in sport themselves. Around the exterior of the bowl, still under the canopy of the dome, is a running track that will be open to the public, and the pools and courts will be available throughout the year, except when they are being used for competition. And that’s not to say that Singapore does not excel at hosting sporting events – the Formula 1 street race is one of the most popular meets on the calendar, and the nation has successfully held the Youth Olympics and will host the South-east Asian Games in 2015.

In his commentary for Hubert Aquin’s film Le sport et les hommes (1961), Roland Barthes said, “It must be remembered that everything happening to the player also happens to the spectator. But whereas in theatre the spectator is only a voyeur, in sport he is a participant, an actor.” Sport, for many, is an opportunity to indulge in a fanatical desire for victory fuelled by nonsensical, almost primal, allegiances. Stadiums are the ultimate container for outpourings of emotion, tempered (just) by the rules of the game being played in the centre of the bowl. The best national stadiums are steeped in history: they are the backdrops to events that embed the location in a collective consciousness. Events such as the Olympics and the football World Cup provide an opportunity for such moments, but Singapore is still waiting to host a mega-event of its own. For now, Arup Associate’s accomplished new stadium will have to wait.

Websites seriously worth a look….

█ Arup Associates http://www.arupassociates.com/en/
Our world-leading architects and engineers work together in one studio, collaborating as genuine equals on every project. This fusion of ideas helps us create architecture that challenges conventions, setting new standards that shape the future of buildings. Arup Associates prioritise research as a driver of design. Arup (officially Arup Group Limited) is a multinational professional services firm headquartered in London, UK which provides engineering, design, planning, project management and consulting services for all aspects of the built environment. The firm is present in Africa, the Americas, Australasia, East Asia, Europe and the Middle East, and has over 11,000 staff based in 92 offices across 42 countries.

█ Aecom http://www.aecom.com/
What sets us apart is our collaborative way of working globally and delivering locally. A trusted partner to our clients, we draw together teams of engineers, planners, architects, landscape architects, environmental specialists, economists, scientists, consultants, as well as cost construction, project and program managers dedicated to finding the most innovative and appropriate solutions to create, enhance and sustain the world’s built, natural and social environments. From transportation, energy and water systems to enhancing environments and creating new buildings and communities, our vision remains constant — to make the world a better place. Listed on the Fortune 500 as one of America’s largest companies, Aecom’s employees now serve clients in more than 150 countries around the world.

█ DP Architects http://www.dpa.com.sg/
DP Architects, formed shortly after Singapore’s national independence in 1965, has designed many of the country’s most important public projects. Each of these has played a critical role in shaping Singapore’s civic urban landscape and downtown core, by linking spaces of the city in the formation of a continuous urban fabric. These sites serve as social and cultural anchors for Singapore and as public nodes of human density that have contributed greatly to the city’s success. As a practice evolving contiguously with Singapore as a global city, DPA’s local role is as a practice ingrained with a special understanding of regional progress and needs. DPA applies this regional knowledge – from aspects of climate to social and economic factors that contribute to a city’s long-term health – to its projects throughout Southeast Asia and the Middle East. The firm’s recent architectural works are some of the largest of their type in the world: The Dubai Mall at 550,000 square metres is a ‘city within a city’ hosting programmes of shopping, entertainment and leisure, and was in 2013 the world’s most visited leisure destination with 75 million visitors.

What change, collaboration and vision can do! 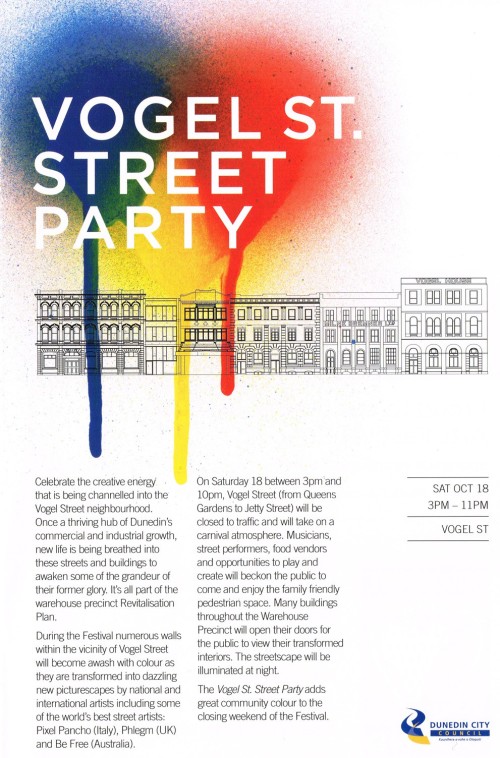