There are serious DCC issues underpinning the Code of Conduct process.

DCC Bureaucracy has run many months of self-investigations costing quarter of a million dollars, which this Councillor has not been allowed to see the results of.

Unbelievable claims that the acknowledged $1.6++ million worth of fraud was all perpetrated by one man only, now dead.

Months of Police investigation leading nowhere, with no prosecutions because they only looked at missing vehicles and anticipated that all receivers had to say was they thought the dead man had authority to sell in the way he did. And they all did. This despite many assurances from CEO Bidrose to me from the beginning that there would be a full and wide investigation.

My requests to the Serious Fraud Office [including discussion of 3 year plus investigation of Landfill frauds by local Police] to do the job local Police are seem not to be up to. CEO Bidrose claims SFO had been asked to investigate but SFO have no knowledge of this when I ask them to investigate.

Police investigation only claimed to be widened by Police management after my exposing of their very narrow investigation. Still no prosecutions, or Police interest to date in my offered evidence of Citifleet maintenance contract fraud, credit card fraud etc.

Mayor Cull and CEO Bidrose saying that no public comment allowed while investigations ongoing, but commenting themselves that it was all down to just one man and that the public can have confidence in the living remainder of the DCC organisation.

Mayor Cull accepting non-confirming [devoid of any evidence] Conduct complaints against me.
Crs. Thomson and Staynes add tampered evidence to one of their complaints but not the other – both immediately accepted again by Mayor Cull.

Mayor Cull falsely claims it is within his authority to choose the membership of the Code of Conduct committee against me. Is defeated.
Mayor Cull chooses again, this time with majority Councillor rubber stamp.

CEO Bidrose fails to ensure proper meeting and Code of Conduct processes over many weeks, fails to read my related email, finally culminating in hallway loudness. My full apology should have been printed and still should.

Audit and Risk committee fails to address major DCC problem of contract fraud, identifying 17 types of fraud but not including contract or tender fraud which I have been complaining of repeatedly.
Audit and Risk chair refuses ultra vires to allow any discussion or debate on 40 page pivotal financial report confirmed agenda item which I had previously indicated in the meeting I wanted to speak to.
Cr. Calvert also wished to speak to it but the Chair abused her authority and shut it down. This along with a history of other A&R suppression was the cause of this loudness and my final exit from this committee.

These are all real issues with stories you should be interested in Mr Morris, but instead you bypass the reasons “Whatever the reasons for your frustration…” miss the important issues and ask 5 inane questions about my behaviour.
These are the actions of a gossip columnist, not a reporter.

I’m following up on this morning’s story. I tried to include as much as I could of your comments, where they addressed the issues being raised in the conduct committee’s report, but I’d still far rather talk through it all point by point, in detail.

Failing that, can you respond to these specific questions about where to from here:

1. Whatever the reasons for your frustration, do you now accept that your behaviour (as reported by witnesses in the report) was bullying, aggressive and intimidating and included swearing (which you initially denied)?

2. If you do, what changes (if any) will you make to modify your behaviour, other than the previously mentioned plan to raise concerns with council staff only by email?

3. What is your reaction to the comments by Richard Thomson, who said your approach was counter-productive and your talents wasted?

4. What is your reaction to the comments by Cr Thomson and others suggesting a genuine apology might be the best way forward? Will you consider this, or do you plan to offer one at Tuesday’s meeting or at any other time, or do you maintain that you have already offered one?

5. Do you think your behaviour (as described in 1) is in any way appropriate for an elected public representative? If not, and given the limited sanctions available to the council, will you be considering your position, including whether or not you should resign?

DCC re Dr Bidrose’s time as most senior Citifleet Manager

Please find attached the information you have requested about the responsibilities of Dr Bidrose.
It took a few days to collate as I wanted to ensure accuracy.

The information will also be forwarded to all Councillors for their information. 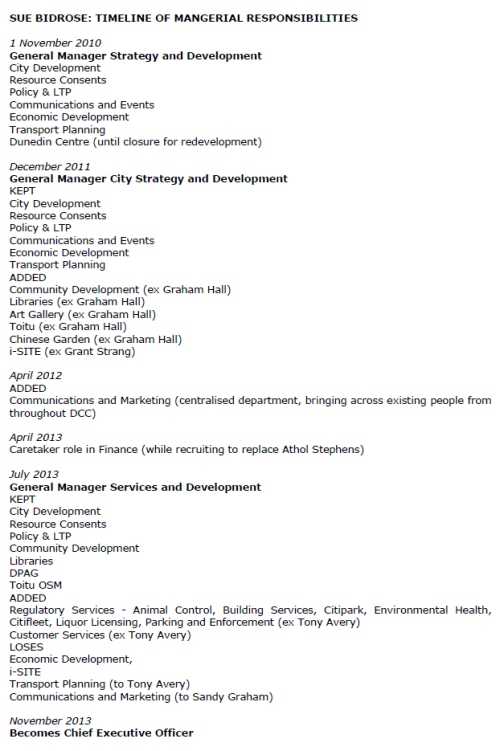 I will get this information on my return to work on Monday.

Thank you for correcting my overestimation of the time Sue was senior manager of Citifleet prior to becoming DCC CEO.
I sincerely apologise for my inaccuracy.
To avoid future inaccuracy on my part, can you please clarify which departments Sue was in a managerial position over and for what periods in the years Sue was at the DCC prior to be coming our CEO.

The overestimation was made in Cr Vandervis’s open letter found at the highlighted link below (15.4.15). -Eds

█ Message: Your readers may be interested in this email exchange below.

This does not answer my governance question Ms Graham, as to why I was not advised that this was coming out.
There has been nothing standard about any of this Code of Conduct process.
Cr. Lee Vandervis

The report formed part of the public agenda that was delivered to all Councillors last night in advance of Tuesday’s meeting.

The media receive a copy of the agenda at the same time as per our standard process.

Code of Conduct public announcement
Dear [as in expensive] all,

I have been rung by media this morning wanting my comment on the outcome of the Code of Conduct claims against me.

Nobody has had the decency to inform me of what these outcomes might have been, despite the exceptionally long time the production of these outcomes has taken.

Can anyone advise me why the media seem to have this information well in advance of me, or is it just standard process for a show ‘trial’, in which I have not even been allowed to see 2/3 of the ‘evidence’.

Re: Code of Conduct decision

I have sent my response to today’s Code of Conduct decision just sprung on me to you since I can not rely on ODT reporter Chris Morris to accurately present it.
Fortunately most interested parties read your blog anyway.

I am innocent of the Code of Conduct claim that I have misled the non-pubic Audit and Risk committee regarding the Citifleet fraud investigations.
The guilt lies with those DCC staff and some elected representatives who for years failed to act on my Citifleet fraud and other whistle-blowing allegations despite the DCC records evidence available to them. Some of this evidence has recently emerged in the Deloitte reports which I continue to seek.
If my allegations and evidence had been appropriately acted on, many matters of grave concern would have been dealt with when the record shows I raised them as early as 2011.
DCC staff refusal even now to let me see the full main unredacted Deloitte Citifleet Fraud report, or the Deloitte staff report, or the digitised relevant DCC records evidence, further increases my suspicion of a cover-up.
Questions regarding the role of new DCC CEO Bidrose as senior manager of Citifleet prior to becoming CEO, and of what she knew of my allegations in the years prior are some of the many questions yet to be answered.

What has been shown is that the Police investigation was certainly very narrowed up until my complaint of this narrowing to CEO Bidrose and the Police investigating officer, some six months after the Citifleet manager’s sudden death. Subsequent claims by Area Commander Jason Guthrie that the investigation has been widened have not been supported by Police following up on the evidence I tried to interest them in: the Citifleet maintenance contract fraud, DCC credit card use fraud, etc. or by any convictions, or other widened investigation action that has been visible to me.

The two loudness claims, evidence of which I have not been allowed to see and therefore defend, both come back to the shutting down of the wider DCC contract fraud debate, and the resulting multiple abuses of Code of Conduct process to try and shut me down.

The four prescribed penalties suggested in the Code of Conduct report are:

1 -Censure
– the Mayor has already done this on pubic and non-public occasions.

2 -Request Apology
– I already apologised for loudness at the time

3 -Suspension of voting right only in Committees, not Council
– abuse of my representative function, but a wet bus ticket given my continuing right to debate

4 -Dismissal from positions of Deputy Mayor, Chairperson or deputy chairperson of a committee
– Mayor Cull already did this at the beginning of the triennium.

The Mayor’s recommended members of the Code of Conduct Committee have run an expensive Kangaroo Court with only my loss of two months committee voting rights to be recommended. It will be interesting to see if enough Councillors will vote for that.
It will also be interesting to see what the voting public think – do they want wide investigation and full disclosure or do they just prefer good news stories from the DCC.

I have sent my response to the What If site, as I can not rely on you to accurately present it.

I was out last night, and the first I heard of the Code of Conduct decision today was radio media wanting comment.

I’ve sent you a text with a very basic outline of the key findings. Happy to hear from you at any time today or tonight for a detailed response once you’ve read the report in full. I understand it was hand-delivered to your house last night.