This week a new reader at What if? Dunedin, Jonathon O’Donohue, mentioned he’d heard that “ODT circulation has dropped 40%”.

Welcome to the Internet.

Interestingly, this came to one of my Twitter accounts yesterday from ODT’s Chris Morris. Thanks! Depressing graph [click to enlarge].

█ For more at What if? Dunedin, use the search terms *allied press*, *odt* or *editor* in the search box at right.

RNZ in Absolutely Great Form [broadsheet carks it, who? where?]

Pardon?
“Newspaper apocalypse” is hyperbolic tabloidese, granted, but there’s a grain of truth there. In the UK, the final Independent newspaper was printed a few days ago, and the title now exists online only, with a much smaller, and less well paid, reporting staff. Hundreds of newspapers around the world have similarly folded, and many more are staring down the barrel, all since the Great Change.

The Great Change? Is this the bit about Sonny Bill Williams’ incredible new look?
No. That was shameless and misleading clickbait. Sorry.
Read more

Mediawatch: ‘The ODT not exactly over-selling the “exciting relaunch” of its website in last Tuesday’s paper.’ –ODT 15.3.16 (bottom, page 3)

### radionz.co.nz Sun, 20 Mar 2016 at 2:40 pm
RNZ National – Mediawatch
Will NZ’s biggest paywall plan yet pay off?
By Colin Peacock
New Zealand’s biggest locally-owned news publisher is set to make readers pay for its online news. Mediawatch asks the editor of the Otago Daily Times if it will pay off, and what the paying punters will get in return.
Audio | Download: Ogg MP3 (11′34″)

The two big news publishers in this country – Fairfax Media and NZME – still give away their best stuff for free online.

….this week the biggest publisher outside of the two main companies announced time will soon be up for its free-loading readers. Dunedin-based Allied Press told The NBR (ironically in an article behind the NBR’s paywall) Otago Daily Times had been “giving away our content free for long enough.” Fighting talk. The publication’s paywall plan is a bold move by a paper which does not often chop or change. Its design is conservative and it carries some distinctly old-fashioned local content. […] From next month, a digital ODT subscription will cost $27 a month – the same as a print subscription. Subscribers of the paper will get online access for nothing. […] But readers leaving comments on the ODT site weren’t supportive. One said he thought it was a joke: “I’m guessing the paywall starts on the 1st of April?”
….Writing for The Spinoff website, [former NZ Herald editor-in-chief] Tim Murphy said because subscribers to the paper also had digital access, a big chunk of the total audience might stick loyally with the website too. But Mr Murphy added: “It will need to have content that you can’t get anywhere else, in a voice and character and feel that you want to support because it is ‘your ODT’.”
Full Article 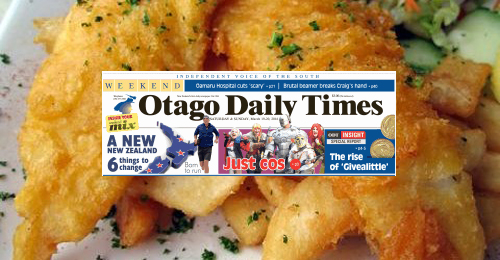 █ http://www.radionz.co.nz/national/programmes/mediawatch
Mediawatch looks critically at the New Zealand media – television, radio, newspapers and magazines as well as the ‘new’ electronic media. It also examines the performance of the agencies, corporations and institutions that regulate them. It looks into the impact the media has on the nation, highlighting good practice as well as bad along the way – and it also enquires into overseas trends and technological developments which New Zealanders need to know about. It aims to enlighten everyone with an interest in the media about how it all works, how quickly things are changing – and how certain significant stories and issues are being covered. It’s also intended to be essential listening for those who work in the industry itself – as well as those who simply enjoy well-produced and lively radio.

### ODT Online Tue, 1 Jan 2013
Ups and downs, but no worries
By Nigel Benson
It was the year that had a bit of everything. A bit like most other years, really. Nigel Benson looks back on 2012… Dunedin wakes up with a New Year’s Day hangover, but feeling rather smug. The driest December since 1918 has brought the best weather in New Zealand, while heavy rain and floodwaters sweep the rest of the country.
Read more

We always enjoy the news. We note the abridgements, deletions, non-acknowledgements and hijackings that meant the most concerning news generated within our Community never got through. No “lack of political motivation”, as ’twere.