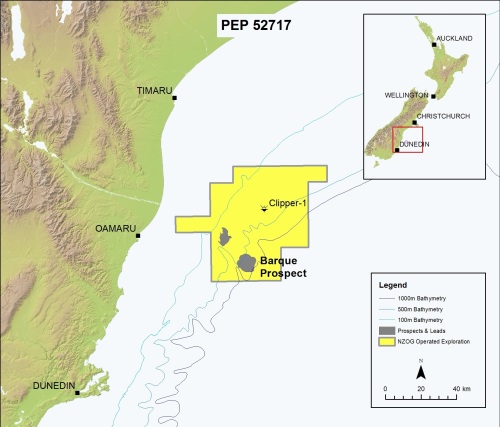 NZOG gives itself a 10 to 20 per cent chance of success at the Barque prospect.

### Stuff.co.nz Last updated 19:04, July 30 2015
NZOG eyes potentially huge Barque oil and gas prospect
By James Weir
New Zealand Oil and Gas may be on to a huge oil and gas prospect in the Canterbury Basin off the South Island’s east coast, but it is still early days and the chances of success are uncertain. The Barque prospect is within the Clipper permit, about 60km off the coast from Oamaru, and it could hold the equivalent of hundreds of millions of barrels of oil. But it is in a higher risk and little explored “frontier” area.

NZOG says in the largest of the three prospective horizons in the Barque prospect, “the best estimate of unrisked prospective resource is 530 million barrels (of oil) equivalent”.

A test well could be drilled in 2017 at a cost of up to US$120 million, if NZOG can bring in a new partner or two to help pay for what the company says is a “pretty attractive prospect” which was likely to be gas condensate, a light oil.
“We are pretty excited about that (Barque) opportunity,” NZOG chief executive Andrew Knight said on Thursday, but the company now needed to get “farm in” partners to take a share of the permit and help pay for the costs of exploration. It is all looking very positive….or as positive as it can be till you stick a hole in it and test it,” he said.
Read more