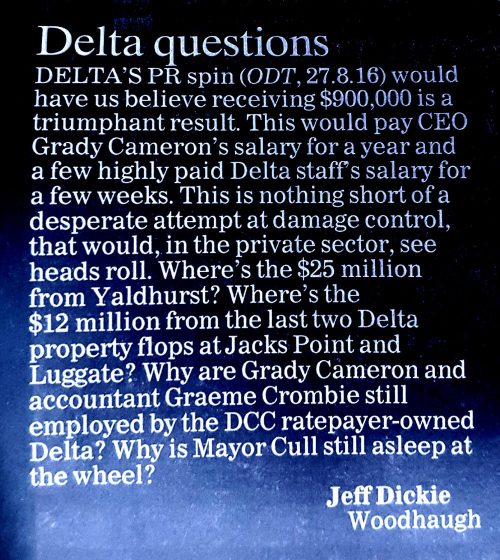 “The sale is not deterring neighbours Colin Stokes and Gregory Smith from court action and Mr Stokes says Delta and Gold Band Finance have been joined to the proceedings originally launched against developer Noble Investments over a breach of contract. […] The litigants are claiming the value of 13 sections on their land had it been able to be subdivided. Mr Stokes says the sections would be conservatively valued at $200,000 each and the [action] also includes a claim for damages because of the holdups to their project, which they expected to launch in 2008. […] Mr Stokes is expecting the court case to be heard within the next year.”

Does this cancel the defamation suit against the mayor of Dunedin, since everyone on the board is feeling competent now and the stars will shine as if from heaven?

### ODT Online Thu, 24 May 2012
New ORFU board unveiled
By Hayden Meikle
It has taken a lot longer than expected but a new-look Otago Rugby Football Union board has been unveiled. As revealed in the Otago Daily Times earlier this week, the board members are Doug Harvie, Keith Cooper, Simon Spark, Kelvin Collins, Andrew Rooney and John Faulks. Harvie will be chairman and Cooper will be deputy chairman. Rooney and Faulks survive from the previous board.

█ The recovery package involved the NZRU providing a long term loan for working capital of $500,000 and Dunedin City Council writing off debt of $480,000. In addition, costs have been cut and additional sponsorship arranged.

█ Almost $500,000 has been raised to allow the union to settle with creditors. A total of 156 non-profit organisations and other creditors who are all owed less than $5,000 will be paid in full. The remaining 24 creditors will be repaid the first $5,000 and half of what they are owed above that. The repayments are due to be made by the end of the month.
Read more

New board for ORFU not formed, deadline shifts for bailout

### ODT Online Wed, 23 May 2012
Rugby: Wait for new ORFU board continues
By Steve Hepburn
The wait continues. The new board of the Otago Rugby Football Union was not named yesterday as expected as negotiations drag on over an agreement between parties involved in the bail-out of the union. The union came to an agreement with its major creditors in March to stave off liquidation and that agreement was to be finalised by the middle of this month. But contracts were still being worked on by parties and had not been signed off by yesterday.
Read more

QUESTION In light of revelations about the ORFU’s unauthorised use of funds received from charitable trusts to solve its liquidity problems, and if the ORFU has been trading while insolvent, is the Dunedin City Council reconsidering its position in regards to the ORFU bailout package? It should, the Council owes ORFU nothing.

How will ORFU continue to trade? $400,000 in donations received doesn’t absolve the union of its obligations.

### ODT Online Tue, 17 Apr 2012
Rugby: New Otago board by end of May
By Steve Hepburn
A new board to run the Otago Rugby Football Union should be in place by the end of next month, with clubs to be consulted over a reworked constitution in the next couple of weeks. The union is also hoping to have raised about $400,000 to pay off its small creditors.
Read more

Guarantee and Indemnity of ORFU

Lee Vandervis has obtained three documents from Dunedin City Council via an official information request (LGOIMA). These documents are now in public domain.

Anderson Lloyd have located the signed versions which are attached. I have also attached a copy of the coverslip for sealing documents. The Mayor and Cr Brown are the signatories to the documents.

[via email attachment(s) to the above message]