### design-milk.com 13 Jun 2014
Tiny 100-Square-Foot Apartment Virtually Transforms Throughout Day
Posted by Gregory Han
When it comes to forecasting the future, there are two schools of thought: one that sees our planetary cup still half full, the other alarmingly half empty. You can cast Bernardo Schorr, MFA candidate in Parsons’ Design and Technology program and Creative Technologist, with the camp predicting a gloomy dystopian future…. a future where a great many of the world’s population will have to live in much smaller dwellings out of necessity, “in windowless apartments with areas limited to 100 square feet.”

But not all is lost! Schorr also believes digital technologies can be engineered to allow occupants of these micro-apartments to escape the sensation of being confined within prison cells by projecting immersive virtual environments to “expand” the walls far beyond their true dimensional boundaries. Offered as an “utopian solution for a dystopian scenario”, Schorr’s “Mixed Reality Living Spaces” project serves as an experiment for a future when windows will have become a luxury and our circadian rhythms regulating sleep and activity will be cued increasingly by a pixel perfect simulacrum of the world outside.
Read more + Photos

Mixed Reality Living Spaces
[Conceptual only, what would 3D printers make for body hugging multi-use furniture, here we don’t find out – but the design principle is worthy. -Eds] Mixed Reality Living Spaces is an imagination of how current and near-future technologies will help us cope with issues of space scarcity and confinement that will derive from urban development.

With 60 square metres (approximately 645 square feet) to work with, Russian designer Vlad Mishin designed the Transformer Apartment which contains several transforming elements. The apartment is separated lengthwise by a massive, faceted wall structure that is made up of black metal framework and plywood that hides away various household functions.
Read more + Photos

Overview via Wikipedia:
8 Spruce Street, originally known as Beekman Tower and currently marketed as New York by Gehry, is a 76-story skyscraper designed by architect Frank Gehry in the New York City borough of Manhattan at 8 Spruce Street, between William and Nassau Streets, in Lower Manhattan, just south of City Hall Park and the Brooklyn Bridge.

8 Spruce Street is one of the tallest residential towers in the world, and the tallest residential tower in the Western Hemisphere at the time of completion in February 2011. The building was developed by Forest City Ratner, designed by Frank Gehry Architects and WSP Cantor Seinuk Structural Engineers, and constructed by Kreisler Borg Florman. It contains a public elementary school owned by the Department of Education. Above that and grade-level retail, the tower contains only residential rental units (898 in total), a rarity in New York’s Financial District. The skyscraper’s structural frame is made of reinforced concrete, and form-wise it falls within the architectural style of Deconstructivism together with the begun later and completed earlier Aqua skyscraper in Chicago.

The school is sheathed in reddish-tan brick, and covers 100,000 square feet (9,300 m2) of the first five floors of the building. It will host over 600 students enrolled in pre-kindergarten through eighth grade classes. A fourth floor roof deck will hold 5,000 square feet (460 m2) of outdoor play space. Above the elementary school is an 898-unit luxury residential tower clad in stainless steel. The apartments range from 500 square feet (46 m2) to 1,600 square feet (150 m2), and consist of studios, one-, two- and three-bedroom units. All units are priced at market-rate, with no low or moderate income-restricted apartments. It does not contain any units for purchase.

The building also includes space for New York Downtown Hospital. The hospital will take up 25,000 square feet (2,300 m2), and will have public parking below ground. There are public plazas on both the east and west sides of the building, one 11,000 square feet (1,000 m2) and the other somewhat smaller. Street-level retail, totalling approximately 1,300 to 2,500 square feet (120 to 230 m2), is included as part of the project. 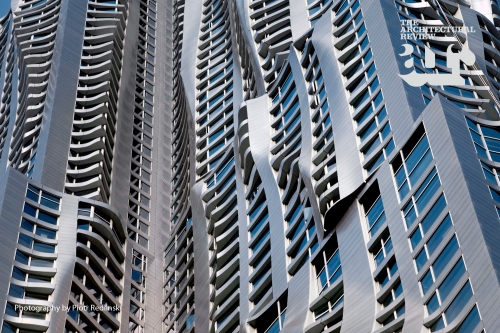 Early reviews of the 8 Spruce Street tower have been favourable. The building was also heavily criticized for “appearing as a nuclear meltdown”, for being the most expensive per square foot residential tower in Manhattan and for receiving $204 million in federal bonds for its $875 million construction cost. In The New York Times, architecture critic Nicolai Ouroussoff praised the building’s design as a welcome addition to the skyline of New York, calling it: “the finest skyscraper to rise in New York since Eero Saarinen’s CBS building went up 46 years ago”. New Yorker magazine’s Paul Goldberger described it as “one of the most beautiful towers downtown”. Comparing Gehry’s tower to the nearby Woolworth Building, completed in 1913, Goldberger said “it is the first thing built downtown since then that actually deserves to stand beside it”. CityRealty architecture critic Carter Horsely hailed the project, saying “the building would have been an unquestioned architectural masterpiece if the south facade had continued the crinkling and if the base had continued the stainless-steel cladding. Even so, it is as majestic as its cross-town rival, the great neo-Gothic Woolworth Building designed by Cass Gilbert at 233 Broadway on the other side of City Hall Park.” Gehry designed both the exterior, interiors and amenities spaces, along with all 20 model apartments.

█ Frank Gehry is perhaps the most celebrated practicing architect in the world today. He has been the recipient of dozens of awards recognizing excellence in architecture including the Pritzker Architecture Prize, which honours “significant contributions to humanity and the built environment through the art of architecture”. Over the past five decades, under Gehry’s creative direction, Gehry Partners, LLP has designed public and private buildings in North America, Europe, and Asia. Hallmarks of Gehry’s work include a particular focus on creating spaces that are comfortable to the people who use them, and that exist well within the larger context and culture of their location. The firm’s approach to design is one in which the client becomes fully engaged in the process, making each project a true collaboration.