Bell Tea Building has a future! 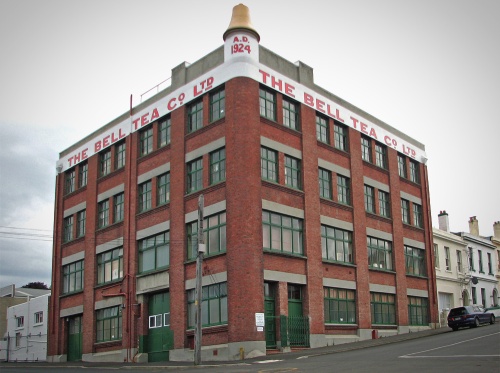 The factory of New Zealand’s oldest tea company, founded in 1898 by Norman Harper Bell in Dunedin.

Dunedin’s Bell Tea building, on the corner of Hope and Carroll Sts, has been sold. Bayleys commercial, industrial and retail agent Robin Hyndman said there had been “good interest” in the building, more than 20 site visits and four tender offers lodged. (ODT)

### ODT Online Thu, 4 Sep 2014
Developer buys Bell Tea building
By Simon Hartley
Dunedin’s distinctive 90-year-old Bell Tea building has been sold to Dunedin developer Peter Gullen, who says it was a spur-of-the-moment purchase. Mr Gullen, known for building flats and townhouses around the city, was reluctant to go into plans for the building, but said he first “wanted to get it earthquake proof and save the building”.
Read more

### D Scene 26-1-11
Honour heritage (front cover)
History and architecture advocates such as David Murray are lobbying hard to prevent other notable buildings sharing the fate of the Rattray Street property which started crumbling and collapsing a fortnight ago. See p3. #bookmark

Fears for old buildings (page 3)
By Wilma McCorkindale
A new lobby group fears many significant an historic Dunedin buildings will be lost to the city due to neglect. An increasing number of older buildings in the city – some are of great historical importance – are being identitfied by the newly-formed group, Stop Demolition By Neglect. The group launched [an online petition] last Friday and has already begun naming and shaming some buildings.
{continues} #bookmark

Beyond the facade
Bells and whistles / Factory originals (pages 8-9)
By Wilma McCorkindale
This week is the second of the four part series, Beyond the Facade, where D Scene takes a peak behind the well-known exteriors of some of Dunedin’s landmark buildings to see what can be found inside. Today D Scene photographer Wilma McCorkindale takes her camera into the Bell Tea Co Ltd Factory at 15 Hope Street.
{continues} #bookmark