### dunedintv.co.nz February 24, 2014 – 7:16pm
Stadium proud of numbers despite opposition and projected losses
The Forsyth Barr Stadium is crowing over numbers through its gates, as the DCC debates a projected $1.4m loss for the facility.
Meanwhile, a stadium opponent is calling for reports from 2008 she says backed claims the stadium would run at a profit.
Ch39 Video

24 February 2014
Reports tabled at the meeting of the Dunedin City Council:

TIME FOR SOME PLAIN, HONEST ANSWERS

Dunedin ratepayers are being informed by Sir John Hansen, Chairman of both Dunedin Venues Management Ltd and Dunedin Venues Ltd, that the projected $10,000 operating profit forecast for 2014-15 is now forecast to be a $1,400,000 loss, with similar or even greater losses forecast in future years. He puts this staggering reversal in fortunes down to the reality of costs of running the stadium, and few events occurring at the stadium.

But even these revelations don’t tell the full story of this stadium debacle and financial scandal.

Accompanying the annual injection of well over $9 million to run the stadium, are all of the costs of servicing the debt to build the stadium. Because these costs reside within DVL, they are not reported on in the DVML forecasts.

Readers of the Otago Daily Times will recall a full-page advertisement placed by the Carisbrook Stadium Trust on the 31st of May, 2008, at the time the stadium project was being considered. Headed up “The Facts about the new Stadium”, it said: “The stadium will be profitable. The funding target establishes a debt free stadium. On this basis the business plan for the stadium shows that it makes a profit. Unlike nearly all other Council owned facilities it will not need annual funding support. This assessment has been confirmed by two of New Zealand’s leading accountancy firms.”

These statements are unequivocal and cannot be misinterpreted.

Bev Butler has, for over a year, had an official request in to Mr Malcolm Farry, Chair of the Carisbrook Stadium Trust, to supply the names of those two leading accountancy firms and for the documentation supporting the validity of the claims to build a debt-free stadium and for it to run at an annual profit. Mr Farry has so far failed to deliver that information as required under the requirements of the LGOIMA.

How much notice was taken by members of the public and those Councillors and others who were considering whether it made sense to build a new stadium? Perhaps hard to assess. But surely it must not be too hard for Mr Malcolm Farry to reveal to Dunedin ratepayers just how it was that they would have a debt-free stadium and an annual profit instead of a stadium that is millions in debt and costing ratepayers further millions in its staggering operational losses. 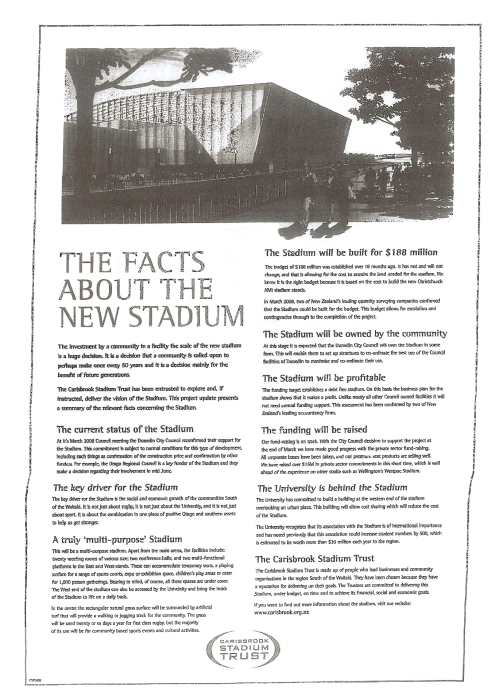