Toddler Ihaka Stokes was 14-months old when he died after suffering 59 injuries in the days leading up to his death on July 3, 2015

30/03/2017
Newshub: Jury retires to make decision on Christchurch toddler murder trial
The jury in the trial of Troy Taylor, who is accused of murdering toddler Ihaka Stokes, has retired to consider their decision …. Taylor pleaded not guilty to assaulting Ihaka on July 2, 2015 and not guilty to the toddler’s murder. Throughout his trial in the High Court at Christchurch he has continued to plead his innocence. Ihaka’s mother, Mikala, was the only other person who was in the house that night, and the defence argues it was she who inflicted the fatal blows. Cont/ 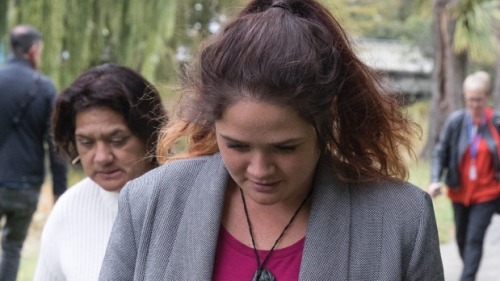 Fri, 31 Mar 2017
ODT: Mum goes clubbing after court
The mother of murdered Christchurch infant Ihaka Stokes went nightclubbing last night just hours after her ex-partner was found guilty of the boy’s brutal killing. Mikala Stokes (21) posted a photo on social media in the early hours of this morning. The selfie caption read: “From court to club”. Earlier in the evening, after Troy Taylor, the man who blamed her for killing her 14-month-old son at their Christchurch home in July 2015, was found guilty, Stokes posted photographs of her playing beer pong. One of Stokes’ friends on Snapchat, Julie Stechmann, screen-grabbed the nightclub photo, which was posted at about 1am. She told the Herald today that she thought it was strange behaviour. Cont/ 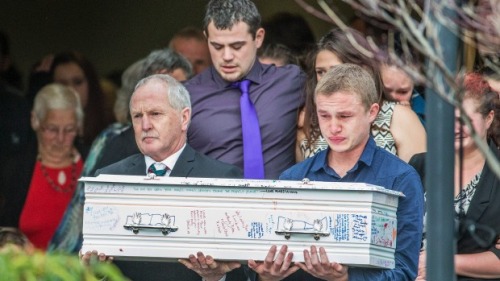 Cameron Ellen, right, carries his son Ihaka Stokes’s coffin at his funeral in 2015. The 14-month-old was murdered by Troy Taylor (in purple, centre), the then partner of his mother Mikala Stokes (obscured, behind Ellen).
Photo: John Kirk-Anderson/Fairfax NZ 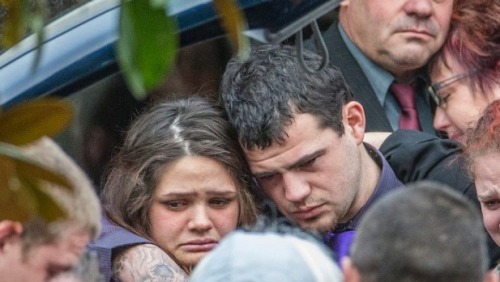 New Zealand Police Published on Dec 16, 2015
Singer Tina Cross and Counties Manukau’s police choir have joined forces to re-record Tina’s song Walk Away. Supported by Otahuhu Blue Light Choir, and with messages from It’s Not OK champions Vic Tamati and Jude Simpson, this video makes a heartfelt statement – family violence is never OK, but it is OK to ask for help.

A police choir has joined forces with Kiwi singing star Tina Cross to take a powerful and heartfelt stand against family violence.

The video – including messages from Jude Simpson and Vic Tamati, champions for the national anti-violence campaign It’s Not OK – was launched at Counties Manukau Police District Headquarters.

The launch included a live performance of the song, a screening of the video and speakers including Jude, Vic and Police Commissioner Mike Bush.

Choir leader Inspector Wati Chaplow and manager Martin Bailey approached Tina – who had twice previously performed with the choir – about collaborating on Walk Away, from her 2014 album Lay Down Your Heart.

“She’s a true professional and an amazing performer,” says Wati. “We knew she had this song that dealt with family violence. Its lessons – ‘walk away’ and ‘give her a voice’ – are very apt to our work.”

He says the inclusion of Jude and Vic’s stories adds to the impact. “It’s hard for a victim to walk away but Jude is proof that it can be done. And Vic’s story shows that as an offender you can also walk away from that violence and anger.”

Tina, an ambassador for Women’s Refuge, says working with the police and Blue Light singers had been “absolutely brilliant”.

“We’re all in the same waka,” she says. “The kaupapa is the same for us all, sworn officer or non-sworn. The most important thing is what the song can deliver.”

Walk Away published 3 Jul 2014
Tina would like to thank those women who appear in close up, those who opened their homes to a film crew, those who walked the streets with her and of course, three of her best chick singer mates, Jackie Clarke, Annie Crummer and Callie Blood. “Thank you all for being wonderful Wahine and giving your support to “Walk Away” and Women’s Refuge.

The recommendations of the panel have been withheld.
PANEL MAKES 89 REFERRALS TO POLICE

State care-givers used fists, feet, and weapons to attack children in a period between the early 1940s and 1990s, says the final report of the Confidential Listening and Assistance Service.

### Stuff.co.nz Last updated 07:32, August 25 2015
Generation of children brutalised in state care won’t get public apology
By Stacey Kirk
The Government will not offer a formal public apology to all children who were in state care during a 50 year period of brutal abuse. The final report of the Confidential Listening and Assistance Service has detailed the harrowing experiences of children at the hands of people who were meant to keep them safe. The report, which heard evidence from more than 1100 people, is still under consideration by the Government. The abuse detailed in the report covers foster homes, institutions, asylums, health camps and borstals from the early 1940s up to 1992. […] Judge Carolyn Henwood, who headed the panel that has been hearing grievances since 2008, said: “Foster caregivers and extended families, social workers and staff, teachers, the clergy, cooks, gardeners, night watchmen, even other children and patients, all took part in abuse. […] When we asked people why they had come, they said they wanted to be heard, they wanted an apology and accountability, and they wanted to improve state care for children, for the next generation.” Even now, New Zealand had no official “duty of care” towards children written into its law, Henwood said.
Read more

ODT: Level of child abuse ‘horrifying’
● A panel tasked with examining historical abuse in New Zealand’s state institutions has heard a litany of physical, emotional and sexual abuse, describing it as “horrifying” and “deeply shocking”.
● In its final report, released to Fairfax under the Official Information Act, chairwoman Judge Carolyn Henwood said the panel members were “profoundly affected” by what they heard.
● More than 1100 people came forward to speak to the panel between 2008 and June this year, covering child welfare care, psychiatric care and health camps, and residential education.

For anyone needing help, advice or mediation on employment and work-related matters anywhere in New Zealand . . .

Contact the Ministry of Business, Innovation and Employment (MoBIE) – formerly the Department of Labour.
█ http://www.dol.govt.nz/er/solvingproblems/resolving/mediation.asp

More information on mediation and how to access the service is available at http://www.dol.govt.nz/er/services/mediators/index.asp
or contact the centre on Freephone 0800 20 90 20

You can also contact your union representative, a lawyer or your local Community Law Centre for advice.

█ Don’t hesitate to call Police on 111 if you feel threatened.

We note the following news items with some distress and revulsion.

### ODT Online Wed, 1 May 2013
Queenstown driver paid $63,000 after sexual harrassment
By Abby Gillies
A female truck driver working in Queenstown has been awarded more than $63,000 for being sexually harassed, discriminated against because of her gender and unjustifiably dismissed from her job. A decision by the Employment Relations Authority has ordered Rachael Harrington receive $25,000 in compensation and $38,200 from her former employer Cromwell-based Thunderbird One, over her treatment.
The truck driver started work with the company in Queenstown, which operates a Mainfreight franchise, in September 2008. However, “her employment was both short and fraught”, and she resigned and filed a personal grievance three months later, said the ERA finding. Her claims of being unjustifiably disadvantaged, discriminated against and sexually harassed were unchallenged by the company, it said.
Read more

### ODT Online Thu, 2 May 2013
Sexually harrassed Queenstown driver miscarried
By James Beech
The former Queenstown female truck driver awarded more than $63,000 for being sexually harassed, discriminated against because of her gender and unjustifiably dismissed from her job suspects she miscarried as a result of being told to “manhandle” an 800kg load at work. The Employment Relations Authority ordered that Rachael Lee Harrington receive $38,243 as recompense for wages lost as a result of the dismissal and $25,000 as compensation for humiliation, loss of dignity and injury to feelings from her former employer, Cromwell-based Thunderbird One Ltd. Ms Harrington was “severely bleeding and miscarrying after lifting all the heavy pallets, so it was really super traumatic for her,” counsel Angeline Boniface, of Christchurch, told the Otago Daily Times yesterday. “The worst thing about this entire situation is that here she is bleeding profusely, her father asked for an ambulance to come on site and Mr [Justin] Marshall said, “If you get an ambulance, you’ll be up for disciplinary action,” Mrs Boniface said. “Meanwhile she’s bleeding, she wants to get into the building and other staff members have locked her out and [are] laughing at her. This is awful, just shocking.”
Read more