Re: Urban Design and Envisioning for Dunedin Harbourside

I note the following media items:

●● Indications are that DCC wants Otago Rowing Club to relocate from their premises to a site of the DCC’s choosing.

I wish to formally request ALL reports and visionary/guiding documents and or statements/statements of proposal or intent that are currently being used by Dunedin City Council in consultation with other parties (real and potential – local, national and international) be they:

Any corresponding information and explanation that derives from the, to be publicly notified (this month?), second generation plan (2GP) for these city blocks and foreshore area is also requested.

I look forward to prompt receipt of all available information in electronic format.

Thanks for your very detailed LGOIMA request which I have forwarded to the officialinformation @dcc.govt.nz. Your request will be processed under the terms of LGOIMA and a response will be provided as soon as practicable but in any event within 20 working days.

Posted by Elizabeth Kerr
[it’s OK, not holding my breath for too much public disclosure]

Design alternatives to (pre-selected) bridge not canvassed by DCC

GOODBYE to Rattray St VIEW Shaft from Queens Gardens to the waterside.

HELLO to other serious impediments to unique and very significant harbourside cultural heritage and landscape values at the planned city. 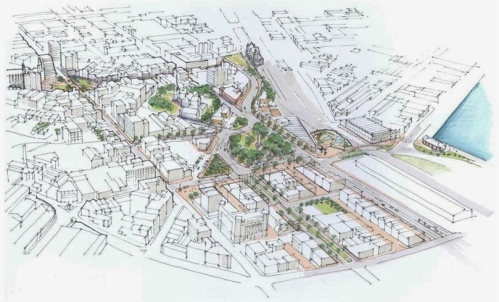 It looks innocuous, nothing to scare the horses. A simple sling over the tracks at an estimated a cost of “about $3 million”.

What’s the fuss? Ahhh well.
The history of political deception through use of loose architectural sketches is tied (here as anywhere) to DCC departmental reports and estimates that hardly ever approximate REAL cost. Multiply by two.

Then the idea that the “hotel” is back on the drawing boards, if not a screw-us invitation to Asian investment for the south side.

By all means let’s escalate this (an idea) – the tame little cheapie bridge (pictured above, significantly downplayed structurally as a pencil mark) is another potential rort in the grand family of Council rorts that includes the Stadium*, Centre for High Performance Sport*, Carisbrook*, Dunedin Town Hall Redevelopment*, Citifleet*, City Forests*, Delta investments (severally)*, Cycle Network et al, and very probably the proposed Mosgiel pool if it gains traction for Taieri property speculators. For each, an independent forensic audit isn’t out of the question – for ratepayer ‘information’ that could depose the Council in favour of a Commissioner, presupposing later redress at Court. Visit resort to the *Crimes Act. Now, there’s a ‘visitor strategy’ for Dunedin !!

Meekly, more circumspectly (after all, it was just an idea, a stretch), those of us trained in architectural rendering and graphics as well as contemporary design philosophy of the marketplace know the tricks intimately; we’re not above exploiting them for a quick buck and a further string of new jobs by secret handshake.

Lucky for some, each deal at Dunedin (with links to Queenstown and Auckland if via Christchurch lawyers and accountants) can be sown up by a very small number of predatory boys. The same list we’ve had on our backburner books tracing the Stadium debacle —beginning to rise apparent at the ODT front page of Friday, 22 May 2015. An intriguing warning shot.

But is this right ? Has Dunedin City Council been wowed by just one bridge proposal ? Has DCC in the first place only ever been looking for a bridge —not seeking opportunities for alternatives, such as a designer underpass or an immediately legible automatically controlled crossing at grade, for light vehicle transit as well (shared roads) ?

It’s pretty poor and conflicting if Dunedin City councillors and senior council management have indeed sold out (under a red-carpeted table) to a lone solicited vision of an overhead bridge UNTESTED BY PROFESSIONAL COMPETITION – another signature WHITE model, to augment those other visions in WHITE for ORC sites at the Steamer Basin —nicely, satisfyingly calculated by that little list of club players.

It’s not hard to imagine that this mere slip of a concrete and steel flyover, is an “enlightenment” carrying the City re-brand. A cause célèbre for ego-fired DCC infidels and speculator man-pals. The very people who can’t bear to endure sage, conservative, long-term economic modelling for Dunedin, taking the city and region through 10 to 50 years of solid management to ensure business diversity and job creation. No, they prefer ad hoc spurts and short-term squander plans (how manly, even when couched as the soft-illustrated 2011 Central City Plan FFS).

Where, for this crossing, is the city council’s reasonably time-lined, broadly advertised, professional design competition with clearly expressed intent to utilise open tendering methods for architectural design, engineering and construction ??

TO SAVE US FROM COI’S AND RORTS.

The Otago Daily Times has learned the bridge is among only a few New Zealand projects vying for the next allocation from the Urban Cycleway Fund.

### ODT Online Thu, 28 May 2015
Bridge on funding short list
By Chris Morris
A multimillion-dollar bridge linking Dunedin’s inner city and waterfront has been short-listed for Government funds. […] An announcement is expected next month, and, if successful, the bridge could be considered for construction over the next three years.
Read more 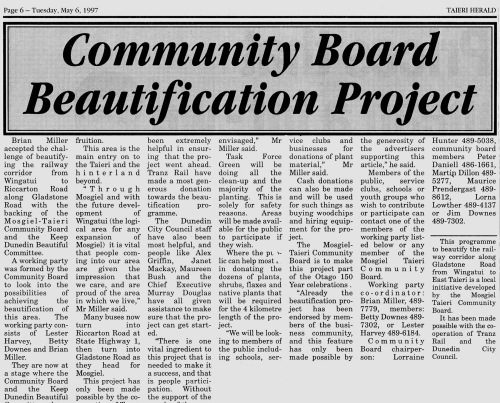 ### dunedintv.co.nz March 26, 2015 – 7:01pm
Nightly interview: Lester Harvey
The removal of plants and shrubs from the Gladstone Road railway corridor has angered some Mosgiel residents. Lester Harvey has spent years co-ordinating beautification efforts in the area, and hopes a meeting with KiwiRail will lead to a positive outcome.
Video

█ What if? fathoms that some strong politics care of DCC/ex-DCC/Community Board/KiwiRail is putting Lester Harvey in the spotlight. Not terribly nice being fall guy for the under-table politicians involved. 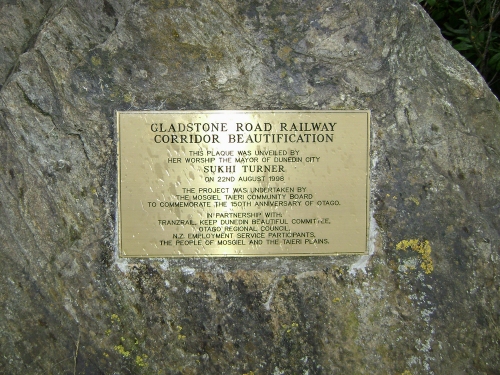 VANDALISM —Nothing else goes near describing what is in this photo.
Let me start from the start.

1997
As a Mosgiel-Taieri Community Board member I accepted the challenge of beautifying the railway corridor from Wingatui to Riccarton Road along a four-kilometre length of Gladstone Road. No other board member wanted anything to do with it, until I had it organised ready to go. They said. “It couldn’t be done.” Just the incentive I needed.

I had to make sure that all the boxes were ticked, before Tranz Rail would let the project begin. With that done, Board members fell over themselves to get involved.

Thousands of hours of voluntary labour went into the project. Alex Griffin and his Taskforce Green did most of the hard work. The local community donated the use of trucks and other equipment, while Lester Harvey ferreted out the thousands of shrubs. We turned what was an eyesore entry into Mosgiel into what it is today. A more welcoming entry. Unfortunately, the story does not end there.

As I said earlier we met all Tranz Rail’s requirements when we did our planting.

Just imagine how I felt this morning when I travelled along the section from Riccarton Road towards the industrial area, and the destruction of the thousands of hours of voluntary labour and gifted plants that had been ripped out. Total destruction of this section of the project. It appears to be at the orders of KiwiRail. The photo tells the story I really don’t have to say much more.

I wonder how those Task Force Green workers and other unemployed workers feel to see what they had contributed to the Mosgiel community, in part, being ripped up.

KiwiRail weren’t the first to vandalise this project, the Dunedin City Council had first crack and destroyed over half of this area by putting in the footpath that you can see in the photo. When they could have quite easily put the footpath on the other side of the road. This would have made it much safer for the school children of East Taieri, as they wouldn’t have had to cross the road twice as they do now to get to school.

The Community Board made this project part of the Otago 150 years’ celebrations. There has been a Fonterra Environmental award, The Queens Service Medal award, and Keep Dunedin Beautiful Awards for this project, but it appears that hasn’t stopped the vandalism.

█ What if? Dunedin notes this has happened on Cr Kate Wilson’s watch (Cr Wilson has been appointed to Mosgiel-Taieri Community Board as the DCC representative). It seems incumbent on DCC and ORC to seek a compensatory amount from KiwiRail for instatement of a new Community Project in the immediate area taking into account the devastating loss of the local community’s green amenity, historical investment of effort to establish the plantings in a difficult location, and the years of plant growth and cover destroyed.
Clearly, a distress and a humiliation.

Message: The Vandals are on the way.
These new photographs show:
1) The metal plaque confirming that the Railway corridor project was a ‘150 year’ project.
2) The sign up the pole is rather interesting —it shows DCC promoting an illegal activity: riding a bicycle on the footpath. A shared footpath and cycleway…. this is completely opposite to what the Council’s Transportation Planning manager wrote in response to a letter to the editor (ODT 13.11.14). She said in the reply: ‘To clarify, cycling on the footpath is illegal in NZ unless you are a NZ post employee or the bike has a wheel diameter less that 355mm usually a tricycle or small child’s bicycle.’
3) ALL the shrubs and trees for removal at Mosgiel’s Memorial Park on the proposed site of the new pool complex —described in the Taieri Community Facilities Trust’s (the pool trust) documents as “minimal site impact”, located to “minimize the removal of existing vegetation”.