Delta has deep fingers into 8-year subdivision dispute at Yaldhurst

### Stuff.co.nz Last updated 17:37, July 10 2017
Delta and Infinity’s Yaldhurst subdivision dispute at mediation
By Chris Hutching – The Press
An eight-year dispute involving developers and a group of property owners in a stalled Christchurch subdivision has gone to mediation. Late last year Dunedin City Council agreed to authorise its Delta Utilities company to refinance a $13.4 million outstanding debt to go ahead and complete the Yaldhurst development along with Wanaka-based developer, Infinity. To allow the development to proceed, Christchurch City Council staff recently recommended the unusual step of “dedicating” the access road rather than “vest” it with the council. But a representative of the private property owners, Colin Stokes, told city councillors that his group’s rights to compensation for land for the road had not been addressed. […] The dispute has been aired in several High Court cases between the private landowners and the developers, which are continuing. Most people who originally signed up to buy properties at the subdivision have pulled out and meanwhile Christchurch’s residential property market has cooled significantly.
Read more

“Fat” gawky Hotel and Apartment building : Questionable design even with 4 floors lopped off

[Everyone will remember the learned Mr Page from the Betterways hotel and apartment building application for 41 Wharf St at the waterfront, not so long ago.]

Mr Bryce (independent planner): …a “key concern” for submitters…the building would block sun from reaching the Regent Theatre and surrounds from 3pm at winter solstice. “At this time of year, the proposal will effectively remove all remaining access to sunlight received over [the] southern end of the western side of the Octagon.” (ODT)

Mr Page (the developer’s ‘Brief’): The “potential shading effect” was acknowledged, but Mr Page was confident the hotel’s benefits “will far outweigh” those concerns. (ODT)

### ODT Online Tue, 11 July 2017
Hotel developer still confident
By Chris Morris
Dunedin’s latest five-star hotel bid will “not be viable” if the developer is forced to reduce the building’s height, it has been claimed. But the man behind the project, Tekapo businessman Anthony Tosswill, remains confident the hearings panel set to decide the project’s fate can yet be swayed by the hotel’s benefits. The comments came from Phil Page, the lawyer acting for Mr Tosswill, days after the public release of an independent planner’s report running the ruler over the hotel proposal.
The report by Nigel Bryce concluded consent be declined unless Mr Tosswill agreed to a “substantial reduction” in the building’s height, by four storeys, to bring it down from 60m to 45.5m.
Read more

SUMMARY OF RECOMMENDATION
[5] For the reasons set out in paragraphs 72 to 334 below, I consider that the Proposal in its current form, will not promote the sustainable management of natural and physical resources in accordance with Part 2 of the Resource Management Act 1991 (RMA or the Act).
[6] The Development promotes a contemporary design, which is considered acceptable within this setting and articulates sufficient design interest and modulation through the facades and its pinwheel like form expressed in the tower component of the building. The building’s design incorporates a base building or podium, which allows the structure to have an active street frontage to Moray Place and Filleul Street, which is considered a positive design response.
[7] The Development will be ‘juxtaposed’ against a backdrop of the heritage buildings located to the east of Moray Place, including the Town Hall and St Paul’s Cathedral when viewed from the west and St Paul’s Cathedral and the Municipal Chambers when viewed from the south (including from the Octagon).
[8] The building’s overall height is considered to generate an over-dominance on properties to the north and west of the Site, and will have more than minor adverse effects on the amenity values of residential properties to the west of the Site. This is largely due to the significant change in scale introduced by the Development and the lower scale built environment that currently exists to the west and north of the development site, comprising predominantly two to three storeys in height.
[9] The Development will adversely impact upon the townscape values of the TH02 Octagon townscape precinct under the Operative Dunedin City District Plan (Operative Plan), including loss of sunlight penetration into the Octagon during the Winter Solstice and will adversely impact upon the setting and pre-eminence of existing heritage buildings such as the St Paul’s Cathedral and the Municipal Chambers building when viewed from the Octagon.
[10] The Development is considered to result in more than minor visual amenity and shading effects on Kingsgate Hotel to the south of the Site. The Kingsgate Hotel will experience prolonged and more sustained loss of light over a wider part of the property and associated buildings over the critical morning period during the Equinox and Winter Solstice periods (or collectively over ¾ of the year). This conclusion has been reached having regard to the potential for the Site to be developed up to a maximum height of 11 metres with a building erected against all boundaries (the ‘controlled activity building outline’).
[11] For the scale of the building to be mitigated to an acceptable level, and to maintain and enhance the amenity values of the City Centre and wider environs, Council’s urban design consultant, Mr [Garth] Falconer recommends reducing the proposed building height by four levels to bring the total height down to nine storeys (Level 13, +157,500 (datum level) on Drawing Section AA). This reduction would provide for a maximum height of 45.6 metres from existing ground level, or a maximum height breach of 34.4 metres (including the lift shaft). This mitigation response would not remove any of the 210 visitor accommodation rooms (hotel rooms), and would maintain supporting facilities including licensed premises, retail, conference, meeting facilities and on-site amenities, parking, and servicing areas. I note, for completeness, that the Applicant is not currently proposing to reduce the height of the Development.
[12] In its current form, it is my recommendation that the proposal should be declined.

Take a glimpse of the ‘urban form’ at Takapuna, North Shore Auckland (his home turf), to know Mr Falconer is likely missing any handle on building height for a heritage city like Dunedin.

Agenda and all documents including Submissions at:

### ODT Online Sat, 8 Jul 2017
Reject hotel bid: planner
By Chris Morris
A planner has recommended rejecting Dunedin’s latest five-star hotel bid, unless the developer agrees to a “substantial reduction” in the building’s height. The recommendation to decline consent came in a report by independent consultant Nigel Bryce, made public yesterday, ahead of the public hearing beginning on July 31. In his report to the panel of independent commissioners, Mr Bryce said the hotel development would “visually dominate” its surroundings, including the town hall, St Paul’s Cathedral and the Municipal Chambers. It would be the tallest building in the central city and would cast a shadow over the Octagon, as well as the nearby Kingsgate Hotel, during winter. Together with other impacts, the development was considered to be “non-complying” under the city’s district plan rules. It would only be acceptable if the building was reduced by four storeys, lowering its overall height from 60m to 45.6m, which was still well above the existing 11m height limit for the site, his report said.
Read more

### ODT Online Wed, 28 Jun 2017
Two from North Island on hotel hearings panel
By Chris Morris
The panel to decide the fate of Dunedin’s latest five-star hotel bid features one familiar face and two from the North Island. Tekapo businessman Anthony Tosswill’s bid to build a 17-storey hotel and apartment tower in Dunedin would be considered over five days, beginning on July 31, it was confirmed yesterday. […] The panel of three would be headed by chairman Andrew Noone, now an Otago regional councillor, acting in his role as an independent commissioner. […] Alongside him will be fellow independent commissioners Stephen Daysh, of Napier, and Gavin Lister, of Auckland.
Read more 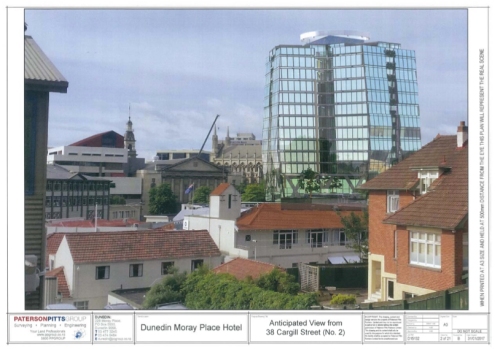