#OldHat Dunedin bus system hard to use and unaffordable

Lynley Hood is a positive advocate for her area, no doubt – but hopefully she can think more widely than Corstorphine, to the provision of fair and equitable public transport for The Many, wherever they live in Dunedin, who struggle to pay standard fares or top up the ‘dumb’ Go Card —or who have no bus service to their streets at decent intervals with timely transfer options for necessary travel destinations [the currently ‘immovable’ ORC system].

[Is Otago Regional Council up with the technology about to change public transport @ New Zealand —thereby cancelling any profit from the ill-thought diesel-breathing bus hub planned for Great King St in Central Dunedin.] 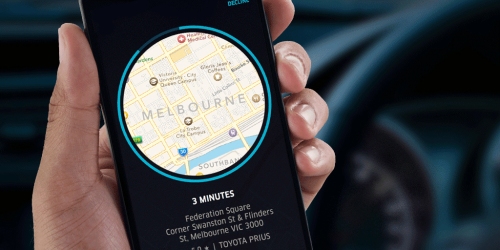 When a new flexible bus ticketing system is introduced early next year in Dunedin and the Queenstown area, consideration would be given to introducing a lower $5 top-up for Go Cards for online payments. –ORC

### ODT Online Tue, 6 Jun 2017
Bus discounts asked of ORC
By John Gibb
Kew resident Lynley Hood is urging the Otago Regional Council to introduce a community services card bus discount to help “transport disadvantaged” people in Dunedin. “Public transport is important for all sorts of reasons, certainly for inclusiveness and giving everybody a chance,” Dr Hood said. If you’re going to proceed with education and get a job, you’ve got to have transport. It’s got to be attractive to everybody, so it works for the people who need it.” She often saw bus users checking their small change to see if they could afford to use the bus, and clearly not everyone could. She has been suggesting this extension of the bus discount system, and other improvements in the Corstorphine bus service, for several years, and made a detailed submission to the council in 2014. More Corstorphine residents would be encouraged to switch to Go Cards by providing the suggested discount for community services card holders, and cutting the minimum Go Card top-up payment from $10 to $5, she said.
Read more

Radiohead Published on Jun 2, 2017
Radiohead – I Promise
I Promise is one of 3 previously unreleased tracks from the album OK Computer OKNOTOK 1997 – 2017.

“Transportation companies compete for customers, and ultimately it is the consumer who makes the choice.” –Chicago’s Department of Business Affairs and Consumer Protection

“Were the old deemed to have a constitutional right to preclude the entry of the new into the markets of the old, economic progress might grind to a halt,” Judge Richard Posner wrote in the 7th Circuit decision. “Instead of taxis we might have horse and buggies; instead of the telephone, the telegraph; instead of computers, slide rules.”

### usatoday.com 4:47 p.m. ET 5 Jun 2017 | Updated
Chicago cabbies say industry is teetering toward collapse
By Aamer Madhani
CHICAGO — Operators of the nation’s second-biggest taxi fleet are now accelerating toward their long-rumoured extinction, edging towards becoming virtual dinosaurs in the era of ride-sharing monsters Uber and Lyft. Cabbies have long grumbled that the sky is falling as they lose ground to ride-sharing companies. Now, cabbies in Chicago are pointing to new data that suggests the decline could be speeding up. About 42% of Chicago’s taxi fleet was not operating in the month of March, and cabbies have seen their revenue slide for their long-beleaguered industry by nearly 40% over the last three years as riders are increasingly ditching cabs for ride-hailing apps Uber, Lyft and Via, according to a study released Monday by the Chicago cab drivers union. More than 2,900 of Chicago’s nearly 7,000 licensed taxis were inactive in March 2017 — meaning they had not picked up a fare in a month, according to the Cab Drivers United/AFSCME Local 2500 report. The average monthly income per active medallion — the permit that gives cabbies the exclusive right to pick up passengers who hail them on the street — has dipped from $5,276 in January 2014 to $3,206 this year. The number of riders in Chicago hailing cabs has also plummeted during that same period from 2.3 million monthly riders to about 1.1 million. Declining ridership for Chicago’s taxi industry comes as foreclosures are piling up for taxi medallion owners who aren’t generating enough fares to keep up with their loan payments and meet their expenses.
….Chicago cabbies aren’t alone in feeling the pinch. In New York, ridership in the city’s iconic yellow cabs has fallen about 30% over the last three years. Last year, San Francisco’s Yellow Cab — the city’s largest taxi company — filed for Chapter 11 bankruptcy protection. Los Angeles taxi ridership fell 43%, and revenue was down 24%, between 2013 and 2016.
Read more 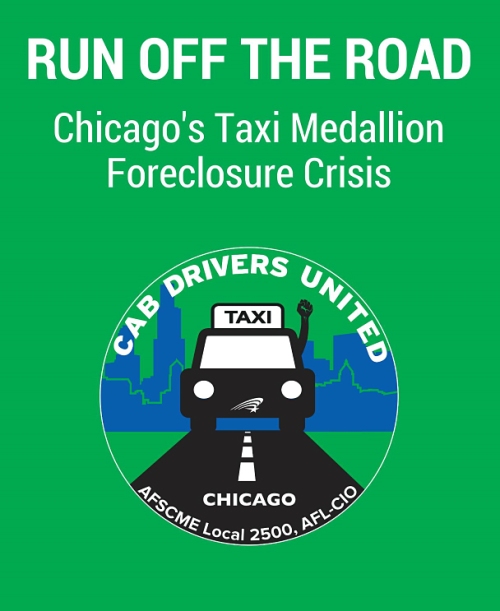 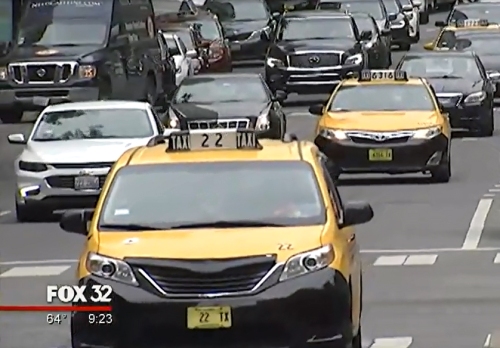 Motherboard Published on May 27, 2016
Is Uber Killing the Yellow Taxi in New York City?
As Uber’s stranglehold over the taxi industry increases, some New York yellow cab dispatchers have found themselves in an unprecedented predicament: sitting on millions of dollars worth of medallion yellow cabs, but not enough drivers to drive them. 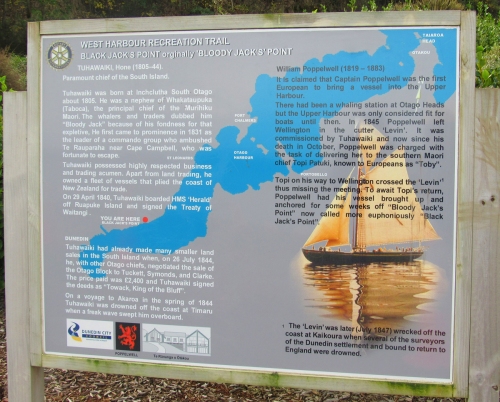 The three-year $200,000 West Harbour Recreation Trail project by the Rotary Club of Dunedin aims to beautify the edges of a 3km section of the cycleway-walkway, from the Otago Boat Harbour to Maia.

On May 26, a Friday afternoon, two Rotarians turned up at the boat harbour end of the Trail to set out the location of new exercise equipment for public use (in preparation for a June 10 working bee) – the next phase of the harbourside project. The men were astounded to find a council contractor, ostensibly there to repair the harbour wall, running heavy machinery across the mown green strip, seriously damaging the designated public amenity area.

While Rotary’s West Harbour Recreation Trail is a council approved project, and the extended site receives maintenance from Taskforce Green, the DCC had completely failed to advise and coordinate with Rotary before earthworks commenced for repair of the seawall. How does this happen ??! 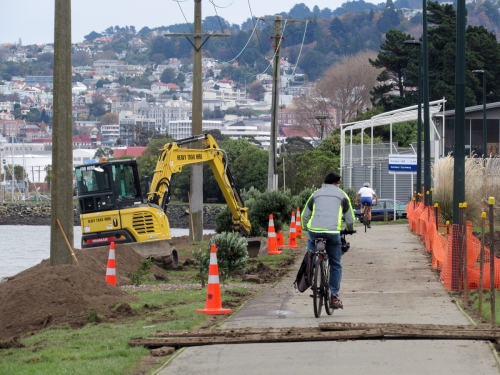 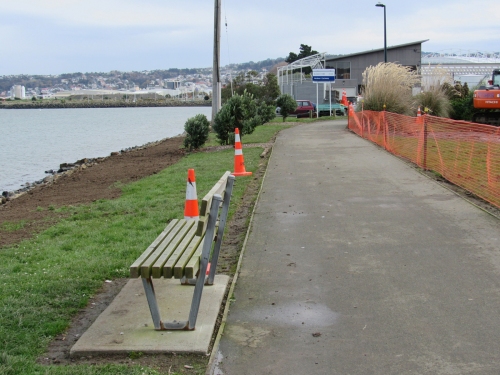 Not such a bad job until you look westward, other side of the orange safety nets: 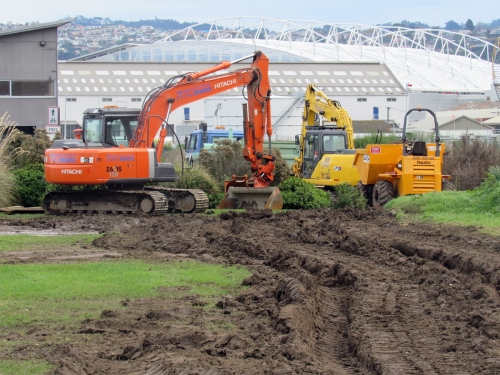 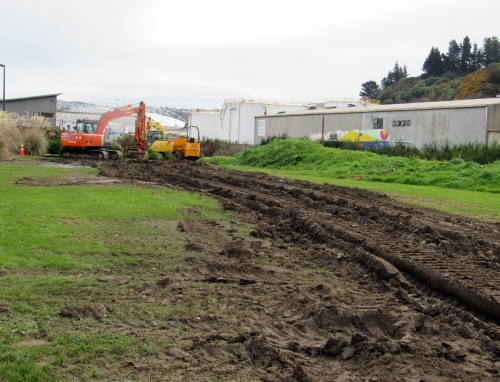 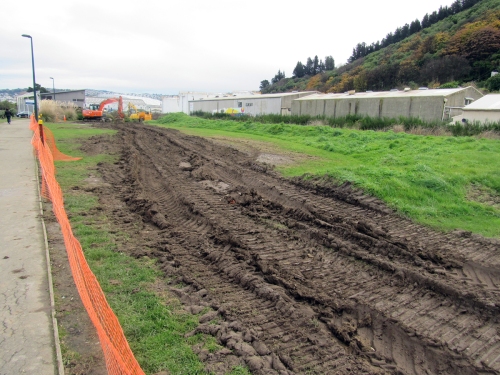 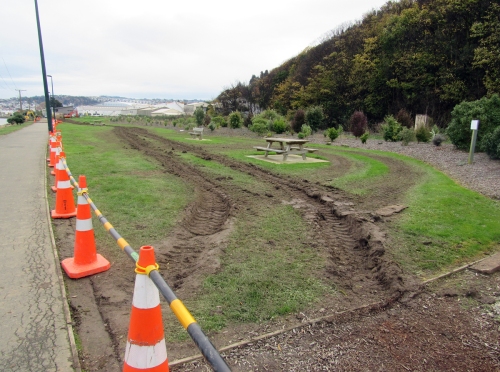 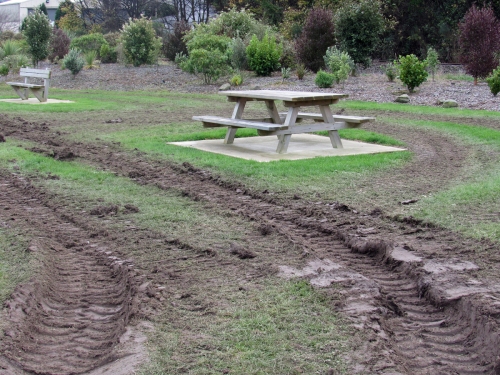 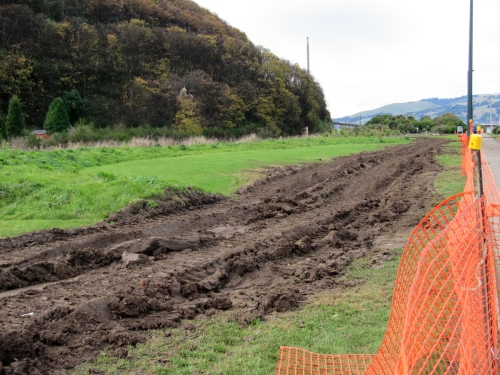 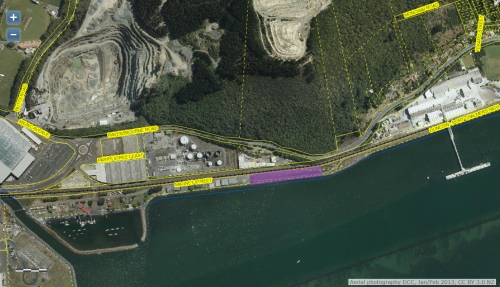 Apparently, DCC has assured Rotary that the damage will be put right by the contractor. However, because of no drying for some time Rotary’s scheduled work at this site is on hold (at least a five month delay).

Rotarians had raised funds from the public to carry out the project.

One of the Rotarians said he was ‘incandescent with rage’ over it – and did not often get incandescent!!

On Tuesday (May 30) I visited the area to take photographs.

This is yet another example of council ineptitude where the left hand doesn’t know what the right hand’s doing. The council’s lack of oversight and the resulting damage may necessitate deeper foundations for the exercise equipment than Rotary had anticipated and budgeted. Their working bee planned for June 10 will be reduced in scale, with only installation of exercise equipment at Ravensbourne Footbridge taking place. The working bees for July and August have been cancelled as the site won’t be in a fit state to work on. Timing of the provision of barbeque facilities as part of the landscaping project is also affected.

There is the Huge Irony that Rotary have only just been awarded 1st Place by Keep Dunedin Beautiful, for their work on the recreation trail. The award came with a $100 cash prize.

Thankfully, say Rotarians, the damage wasn’t done until after the Trees for Babies planting was done on Mother’s Day (14 May). 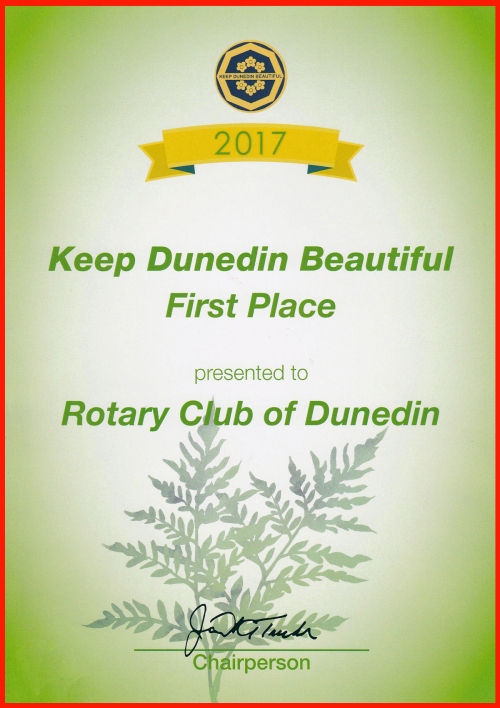 The Keep Dunedin Beautiful Awards “celebrate and honour the people of Dunedin who are committed to beautifying their city and caring for their environment through volunteer action”.

“Each Autumn, in partnership with Rotary Dunedin, Keep Dunedin Beautiful organises tree plantings for babies and other family members in city reserves. Trees for Babies is a long-term native tree-planting project where family members can celebrate the birth of a child or any significant family milestone. It also contributes to a native re-vegetation project in a city reserve.”