The site owner has corrected the post below for Cr Hawkins’ name and apologises to the councillor for the error in judgement and any offence or distress the now deleted form of addresss may have caused. A full apology will be emailed to the councillor later today.

If you’ve stacked all your furniture up and carefully placed your mattress on top where it’s dry, here’s a DCC Sudoku to while away the hours before the FLOOD WATERS (what flood waters) recede from your property. Yarp, study the numbers and statements, the patterns, in the (draft) Annual Plan 2017/18, and go Bonkers.

The rain has become fractionally heavier for a moment due to AUTUMN WEATHER, that’s no reason not to try the DCC Sudoku. Do critique where YOUR MONEY is disappearing to, and slap Daaave’s wrist if you Disagree with the prescribed budget lines. Treat this as a warm-up for the Long Term (Community) Plan. Is your money ACTUALLY being spent on core infrastructure services, or more of the soft-goo and popcorn programmed by Cr Hawkins on behalf of the Labour/Greens vote in September.

The DCC summary of the current (draft) Annual Plan says:
“We’re on track. We listened carefully to you when we developed the Council’s Long Term Plan (LTP) in 2015 and the Annual Plan for 2016/17. We’ve responded to calls to reduce our debt and rates increases and to provide services to high standards.”

Ah well. Rates increases at Dunedin are still far ahead of the national rate of inflation and…. are about to escalate strongly.* 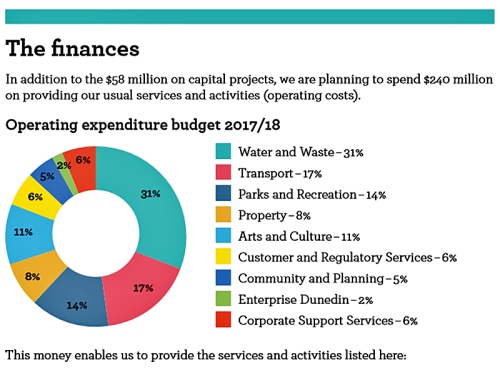 *The council-owned Aurora/Delta fiasco is Not Mentioned by your elected mayor and councillors – that’s ONE BILLION DOLLARS WORTH of burnt asset (the totality of Otago’s electricity network) that Dunedin Ratepayers will have to (paying twice!) finance in replacement. 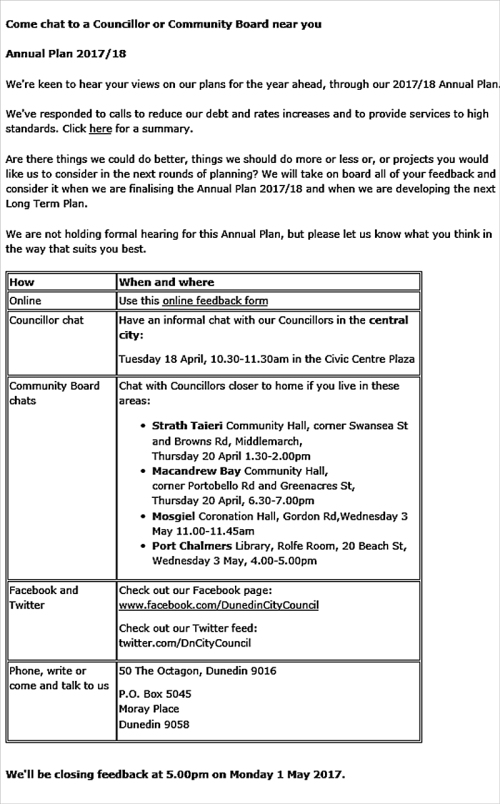 Submissions: Use this online feedback form.