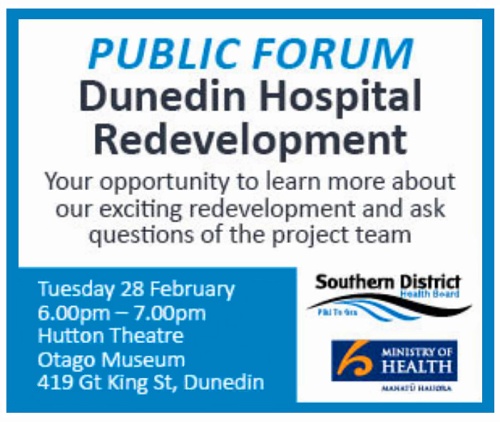 The public is being given the opportunity to learn more about how Dunedin’s new hospital facilities might be configured at an event being held at the end of this month.

A public forum will be held on the evening of Tuesday 28 February to update interested members of the Dunedin community on the redevelopment of Dunedin Hospital.

“The public forum is an opportunity for people to get a better understanding of how we are deciding what facilities we need and where to deliver the best health outcomes for the Southern district. It will provide a great opportunity for people to understand the kinds of issues the team has to find answers for before the architects can complete their work, and the time frames involved in the design and building process,” Chair of the Southern Partnership Group Andrew Blair says.

The forum will include a presentation, followed by a question and answer session.

Southern DHB Commissioner Kathy Grant says the forum will give the community an opportunity to learn how the project is about more than just replacing buildings.

“We want to take this opportunity for members of the public to come along and get a better understanding of this exciting project and the opportunity it presents for developing facilities that can support a modern healthcare system capable of addressing the needs of the next 40-50 years.”