Dunedin Mayor Dave Cull said one factor behind recent delays was the council “definitely screwed up” with the South Dunedin cycleway.

Mr Cull said he understood the NZ Transport Agency was about to start work at the north end of the one-way system. He was looking forward to the NZTA building its planned separated cycle network on the city’s one-way streets. “I’ll be very pleased when they actually get something going, because it has taken too long.”

### ODT Online Sat, 21 Jan 2017
Cycleway work to crank up
….The Dunedin City Council will spend $2.6million of government money on links between the Portsmouth Dr shared cycleway and the city, and State Highway 88 and the Dunedin Railway Station. Those improvements will help link cycleways on West Harbour and the Otago Peninsula. Council spending has been delayed on the peninsula, with $3million spent this financial year instead of an expected $10.3million. […] There were no plans for more cycleways in South Dunedin, other than remedial work on five intersections there, following botched work in 2015.
….The cycleway budget will be discussed at a meeting on Monday to consider the annual plan for the next financial year. […] The strategic cycle network budget would return to the long-term plan next year for community consultation.
Read more

In which THE BLOODY CLUELESS (see italics) needs a freaking rocket.

Comments at ODT online (our italics):

Boldor Sat, 21/01/2017 – 7:06am #
My my Mr I’ve got no agendas is back to wanting to spend untold millions of dollars of ratepayers hard earned money on useless cycleways this money would be be better spent on infrastructure and a small but important thing known as the power grid and poles.

AJPemberton Sat, 21/01/2017 – 10:40am #
A quick rebuttal to Boldor : Cycleways are infrastructure and far from useless. It is not untold millions: they mention costs in the article. And it is a small fraction of the total spend on roads. The NZTA won’t be funding Delta to replace power poles either, that money is only for the cycleways. I was unaware Delta’s power grid maintenance was funded by Dunedin ratepayers, when did that happen?

Donald Trump, 45th President of the United States of America

A reader says “How unpredictable life can be….yesterday fluked a ticket to the Inauguration and am now standing in Union Square with thousands of others.” 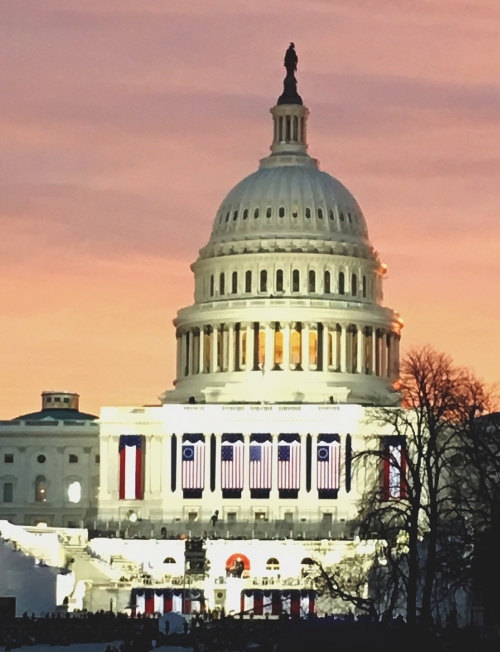 The day of pageantry and ritual — orchestrated both to celebrate the installation of a new commander in chief and to symbolize a peaceful transfer of power — began with a church service and included a military review, a triumphant ­parade down Pennsylvania Avenue and evening balls. Washington Post 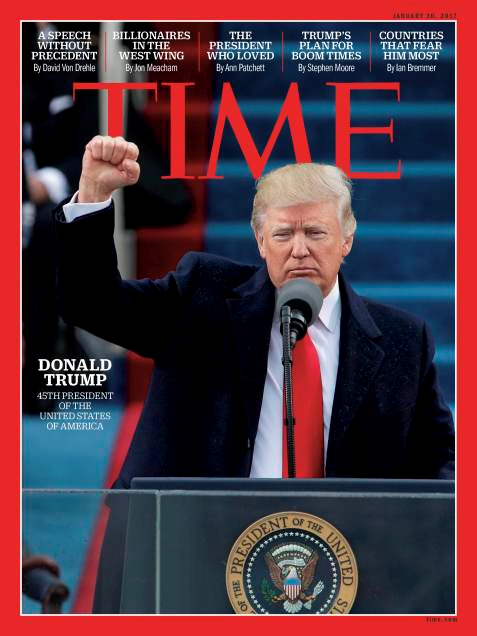 ### time.com 4:34 PM ET Updated: 8:31 PM ET
Donald Trump’s Unprecedented, Divisive Speech
By David Von Drehle
In a rancorous first speech, the new president announces a sharp U-turn in U.S. policy, “America First”
The inauguration of a new president is always a balance between the national legacy and the promise of a fresh start. It is common for the speaker to try to set himself apart. Nevertheless, when Donald John Trump stood for the first time as the 45th President of the United States in a light rain to deliver his address, he went where no president has gone in more than a century. Trump’s message was not on the order of John F. Kennedy’s torch passing, or Ronald Reagan’s declaration that government is the problem. It was not even a 21st century version of Andrew Jackson’s attack on corrupt and incompetent Washington. In 16 mostly harsh, mostly confrontational minutes, Trump laid out a view of America’s destiny and place in the world that would alienate his predecessors dating back to Theodore Roosevelt and beyond.
It may go down as one of the most consequential—or one of the most misleading—speeches in the history of presidential inaugurations. Newly sworn into office, Trump announced a U-turn in the foreign policy that has defined America’s place in the world for more than 70 years. And while he was at it, he savaged the record and the motives of a large number of the men and women seated around him on the West Front of the Capitol. For all his reputation as a builder, he entered office as a wrecking ball. His choice of Vice President Mike Pence and his Cabinet appointments have been sharply conservative, but President Trump’s first message to the world was as radical as they come, and as populist as a pitchfork. If he truly means what he said (always a pertinent question for a fellow who once said he enjoys being compared to P.T. Barnum), Washington is about to become even more rancorous. And the world is in for some very big—and entirely unpredictable—changes.
Read more 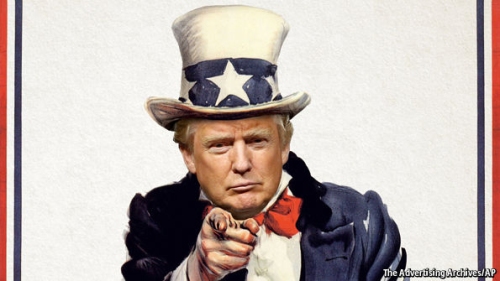 [excerpts supplied]
### telegraph.co.uk 20 Jan 2017 • 7:39pm
Donald Trump’s inauguration proves our revolution is in full flow – I can’t wait to see where it goes next
By Nigel Farage
This has been a very exciting week to be in Washington. A presidential inauguration is simply a massive event. And what I have found truly astonishing is the impact of Brexit on the American mind. As I walk through the streets – and even during a visit to Arlington Cemetery – people simply call out “Go Brexit!”. It is quite extraordinary. Many people want to come up, talk and say: “Thank you! You guys started it and now we’ve got Trump”. Despite the fact this is a big all-American event, there is a genuine feeling that Trump taking over the White House is part of a bigger, global movement. Our critics, looking at Trump’s candidacy and his speech yesterday, would call it the rise of populism. I would say it’s simply a return to nation state democracy and proper values. For this inauguration is not just a change from the 44th President to the 45th President of the United States. This is a genuine political revolution.
As you can see from the various people that Trump has appointed, be they generals or self-made millionaires, the political class in Washington has simply been bypassed. Trump of course must be careful and needs to keep his elected Republicans onside. But be in no doubt – everything will be different from now on. It will be a presidency where Twitter will continue to feature hugely. For as we were reminded at his inauguration, this is a president who is never frightened to say what he thinks. I have to say that, packed with his supporters, the whole event felt like a coronation. No wonder then that Trump was entirely true to himself and gave an incredibly powerful speech, reiterating of all of his campaign themes. It was an intensely patriotic oration and a genuine attempt to try and bring people together. I loved every word of it and cheered along with the crowd.
But what was particularly telling was to cast my eyes up at America’s political class and former presidents sat on the podium. They looked as though they were sucking lemons. That was the day’s most powerful statement that this was not a normal transfer of power. This is a political revolution that will make America great again.

But Washington does have its share of protesters, many of them out in the street making quite a lot of noise. I expect over the course of the next few days there will be several demonstrations. The comforting thing though, is that the mood and atmosphere of these protesters reminds me of nothing so much as Bob Geldoff and his friends in the United Kingdom who would love to reverse Brexit – noisy but irrelevant to the direction of travel. Soon enough, even the noise fades away. Take comfort DJT.
The big political question on everyone’s lips here right now (besides what to expect of the new president) is where this mighty political bandwagon is heading next. For after the huge success of 2016, many out here in America are now asking if we will see more of the same in 2017. They are wondering whether the revolution we have seen in Britain and America will roll out across the rest of Europe too.
Read more [paywall] 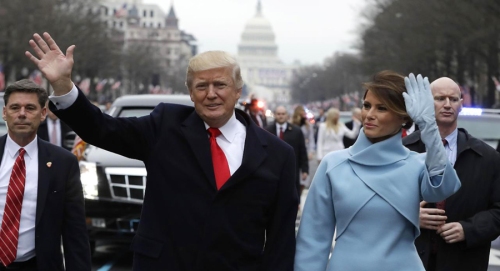 THANK YOU for another wonderful evening in Washington, D.C. TOGETHER, we will MAKE AMERICA GREAT AGAIN🇺🇸 pic.twitter.com/V3aoj9RUh4

Related Post and Comments:
19.1.17 Video from America : Street protest —Washington DC #inauguration
27.12.16 Michael Lewis : The Undoing Project —Interview with Kathryn Ryan #RNZ
29.11.16 If you don’t like Trump – LOVE him for this #climatechangeCon 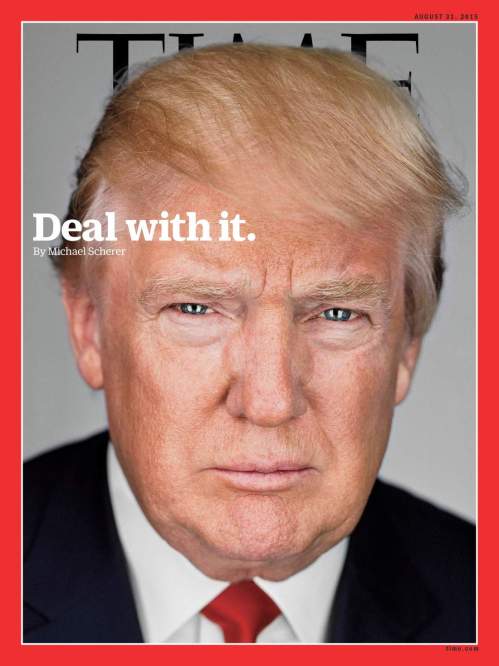