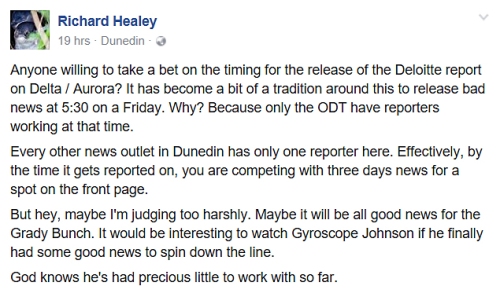 Wed, 7 Dec 2016
ODT: Delta, Aurora report for release by Monday
A report on under-fire Dunedin City Council-owned companies Delta and Aurora is expected to be made public by Monday. Mayor Dave Cull said he hoped the report could be released before that day, following a non-public council discussion on the issue that lasted well over an hour yesterday. Dunedin City Holdings Ltd director Keith Cooper faced a grilling from councillors when he gave them a “progress report” on an investigation by consultant Deloitte into the companies. Cont/

Sat, 3 Dec 2016
ODT: Report discussion behind closed doors
Discussion of a Deloitte report on troubled council-owned companies Aurora and Delta on Tuesday will be behind closed doors, and it is uncertain when they will make it into the public arena. Mayor Dave Cull said the report was not finished yet, despite predictions of an early December completion date. It will be discussed by the Dunedin City Council on Tuesday in a non-public session. Mr Cull said the Dunedin City Holdings Ltd board got a progress report on the investigation yesterday. The board would pass on that report at the council meeting on Tuesday. The agenda for the meeting noted discussion of the report would be in a non-public section of the meeting as “the withholding of the information is necessary to protect information where the making available of the information would be likely unreasonably  to prejudice the commercial position of the person who supplied or who is the subject of the information”. As well, the withholding of the information was necessary to enable the council to “carry out, without prejudice or disadvantage, commercial activities”. Cont/