Delta #EpicPowerFail 6 – Thick as a Brick 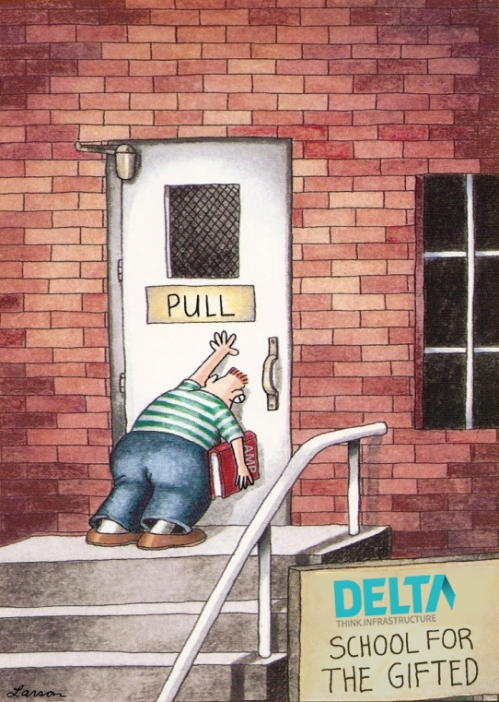 Thick as a brick
Shallow as a bird bath
Not the sharpest knife in the drawer
A few sandwiches short of a picnic
Bought his doctorate online.

Your correspondent was both entertained and aghast this morning when enjoying Choysa and a scone, he read Dr Parton, Aurora chair, dutifully parroting Grady Cameron’s lines in the ODT …. “aged network”, “our approach to its management is conservative”. Dr (Polly) Parton also said “it was “not appropriate” for him to respond to comments made by another chairman”. Your correspondent agrees it is not “appropriate”. It is essential to his credibility to do so, as Polly Parton is right – it is amazing that the chairman of a lines company, far away, has felt the need to make scathing comments about the lackadaisical approach to essential infrastructure he has found in the South, and called Aurora’s response “a lame excuse”. When did you last hear the CEO of a council make scathing comments about another ? —or one mayor disparage another in biting terms. It just isn’t done…. so now the attention of the entire lines industry, and the Commerce Commission is riveted upon Aurora as it has just been confirmed by the chair of Marlborough Lines, with no axe to grind, that Aurora’s mess and subsequent evasions are inexcusable.

Some other gems of the re-cycled obvious from Polly in the ODT were “Age … is one reason why we have marked so many poles for replacement” – how fascinating that the board and Mr Cameron only discovered these 40- to 60-year-old poles were aged and needed replacement around the time Mr Healey left three weeks ago.

Readers, while Aurora and Delta have an arrogant disregard for the interest of the consumers and ratepayers, they are very fearful of the Commerce Commission. And the Commerce Commission is under no illusions about the incompetence of Aurora. Not only did Aurora get warned for network failures this year, and are now ranked in the bottom 3 of the 29 lines companies for reliability, they were also warned about their lack of investment and incompetence in 2014 by the Commission.

On 26 June 2014 the Commission wrote to Aurora issuing them with a warning for non-compliance and raising concerns. They said:

“21. There are a number of concerns that we would particularly like to draw to Aurora’s attention … These concerns are:

21.1 Aurora’s vegetation control has been insufficient to prevent significant tree encroachment on lines, which has likely contributed to the frequency and duration of outages….”
Mr Cameron took great delight in waxing lyrical about the dedicated vegetation management unit Delta set up in 2015-16, and how Delta charged Aurora $4M for clearing 34km of lines. We now know it wasn’t anything to do with Mr Cameron, it was forced upon them by the Commerce Commission because they had neglected it for decades. In true Delta form, the cost of $130,000 per km is probably overstated by a factor of 5-10 dependent on difficulty.

“21.2 Aurora has had an increase in defective equipment incidents”.
Oh yes. Aurora’s own Asset Management Plan (AMP) spells out the failures, and impending ones, as noted in #EpicPowerFail 5. In relation to poles, Aurora reduced the number of poles it was going to replace in 2017-18, in its 2016-2026 plan, due to the mendacity of Matt Ballard, GM Capability & Risk. Reacting to public pressure and casting aside the long term plan due to a “perception problem”, without a funding plan in place is just giving the Commerce Commission all the evidence they need that the board isn’t in control and doesn’t know what it’s doing.

“21.3 There seems to be shortcomings in Aurora’s knowledge of its asset condition”.
….(Translated from bureaucratic-ese, this is : YOU ARE USELESS AND INCOMPETENT, and everything we have heard from Aurora recently confirms that this fault has become exponentially worse.

“21.4 Aurora’s reliance on its 6.6kV network as a back up to its aging 33kV cables in Dunedin could lead to major power outages.”

Ominously for the Directors, the Commission was clear about the consequences of further non-compliance, warning Aurora :

“Notwithstanding its 2013 and 2014 compliance, if Aurora fails to comply with the quality standards again, its 2012 non-compliance will be a relevant factor that may lead us towards a stronger enforcement response. Particularly relevant would be the extent to which concerns raised following Aurora’s 2012 non-compliance contributed to the second non-compliance.”

Here we are, four years later, and 3 of the 4 concerns are front and centre of the latest crisis. A lot of words have been written, meetings held, and plans begun, but the network has continued to decline. Unless the Commerce Commission has another spineless apologist like Rebstock of the Audit Office investigating, then the springs in the boardroom ejector seats are tightening.

Readers, we are all frustrated that Mr Cameron, Mr Ballard, and the directors have not a thread of integrity left among them, preferring eventual forcible removal (health problems anyone ?) to decency. But readers, how delicious will it be when they are kicked out, as that will almost certainly be the end of all of their directorial ambitions. Getting kicked out by the Government is the sort of thing that even the Institute of Directors would frown upon, despite overlooking a lot of other venality. As noted at What if?, the Government cannot afford to have tourists killed or suffering from power outages in their #1 tourist region in Central Otago, so it will not be open for Mr McLauchlan to go crawling to Minister Woodhouse, who doesn’t carry a lot of weight now in any case. McLauchlan’s other great fixer, fellow South Canterbury Finance trougher, Denham Shale, is now dead. Mr McLauchlan feeling the chilled air of exposure perhaps ? Perversely, we can be glad that Messrs Parton, Kempton, Thompson, McLauchlan and Frow are all….“thick as a brick”.

Final thought for the evening. If you were Grady Cameron and the board, and wanted to quickly replace 10,000 poles to “restore public confidence” then does buying steel poles from China that are made from less ductile steel (ie more brittle) sound like a good plan ? (Chinese steel is typically 20-25% ductile, whereas NZ seismic requirements generally require 32-34% ductility. It is near impossible to get Chinese steel at this ductility. A recent example is the problems with steel products imported from China by Steel & Tube). Yes readers, you heard it here first, not only did Mr Cameron fail to tell you where the $30M was coming from (they don’t know yet), he also neglected to mention they are buying steel poles from China. And remember, readers, not only did Mr Cameron describe this as “a good plan” on National Radio, but that he “was excited by it”. Truly…… “thick as a brick”.

█ For more, enter the terms *delta*, *aurora*, *epic fraud* or *dchl* in the search box at right.